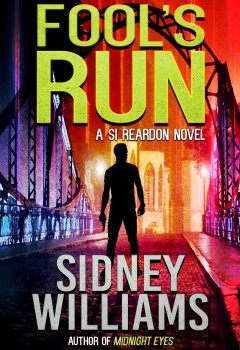 Si Reardon knows nobody wants to hire an ex-cop fresh out of prison unless it’s for a job nobody wants.

His only offer is from Rose Cantor, an elegant and beautiful “special counsel” who just wants him to take a meeting.

Her clients Grace and Adam Holst are asking for extreme justice. A very bad man named Valentine Alexeeva, a criminal on the rise, once ordered the deaths of their young daughters over a business deal gone wrong. Alexeeva covered his tracks well. Now he’s still deadly but cultivating a classy façade and making friends in high places.

Si would like to say no, but he has a daughter of his own who’s in danger, and he needs money fast.

I hope they find that it’s an engaging page-turner with quirky characters surrounding a desperate, flawed protagonist whose only goal is reconnecting with his daughter and keeping her safe.

Raymond Chandler, James Lee Burke, Robert B. Parker, Hammett, John D. MadDonald. Really all of the old school writers and many new ones. I’m not comparing myself to them, but they are the ones that caught my attention early.

Sidney Williams writes page-turning dark fiction and has developed a body of work that includes traditionally published novels from Kensington Books, new works from Crossroad Press and short stories for a variety of magazines and anthologies.

Sidney also teaches creative writing with a focus on horror, mystery, and suspense plus short fiction and contemporary fiction.

Sidney’s stories have appeared in publications including Cemetery Dance, Hot Blood: Deadly After Dark, Under the Fang, Quoth the Raven and Love Among the Thorns.

A native of Louisiana, he now resides in Virginia.