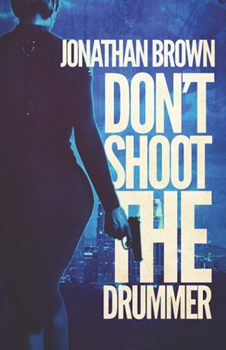 The “Tent Gang,” a three-man crew that robs houses all over Los Angeles that have been tented off for fumigation, has the L.A.P.D. chasing their tails. When a private neighborhood security guard happens on the crew and tries to play hero, it doesn’t go well for him. The mother of the slain security guard wants justice. Enter Lou Crasher, the rock n roll drummer and part time amateur PI.

Normally Lou wouldn’t go near a case this large, but when Jake Strickland, his half brother, asks for Lou’s help, Lou agrees before Jake has finished asking. Lou’s been pulled out of many fires by Jake—it’s long overdue for Lou to lend his brother a hand. Lou has now essentially volunteered to do what the cops have failed to do: catch the tent gang, which are believed to be the killers and solve the murder. Lou follows the clues where they lead and winds up in the crosshairs of Disruptor, a lethal underground anti-society group. The group not only disrupts the statues quo, they maim and murder for no apparent rhyme or reason.

While running down the crooks and dodging bullets from the sub-group, Crasher fights to maintain his rock-n-roll life of gigs, booze, sex, drums and his day job managing the L.A. Practice Joint—a rehearsal studio for local bands. Lou still hangs with his crazy-maker buddy Bobby Coldwater and must make sure he doesn’t slip back into his cocaine addiction.

If Lou manages to keep the drumsticks twirling and escape the attempts by Disruptor to end his life, he hopes that all parties involved respect his personal golden rule: Don’t Shoot The Drummer!

The Big Thrill caught up with author Jonathan Brown to discuss his latest crime thriller, DON’T SHOOT THE DRUMMER:

It may sound cliché, but Raymond Chandler is at the top because I began reading him when I was in my late teens. I loved his dialog and his descriptions. I was already a fan of story, but his books made me want to write. Walter Mosley is another one. I read him in my early twenties, and for me it was cool to read about a black protagonist. On top of that, I really dug the L.A. era he drops his character Easy Rawlins into.

Readers will find this to be a fun, quick, action-filled book with a strong mystery and rich characters.

I’ve always been into the PI story ever since I was a kid. How can you not love a guy who fights crime but doesn’t have the benefit of an army of cops behind him? I like the loner aspect of the PI and that he’s driven by his sense of right and wrong. And he’s not opposed to bending the law if it falls on the right side of his moral philosophical line.

Jonathan Brown writes crime fiction as well as historical fiction. DON’T SHOOT THE DRUMMER is the second in the Lou Crasher books. He’s written Moose’s Law as a stand alone novella featuring Doug “Moose” McCrae, a bouncer turned ‘fixer.’ Brown also narrated the audiobook for Moose. He wrote A Boxing Trainer’s Journey based on the life of Angelo Dundee for Mentoris Books and is currently penning Character Is What Counts, a novel based on Vince Lombardi for Mentoris. (Coming 2021)

Brown is knee-deep into the next Crasher novel, working title: Drums, Guns N Money. A Moose follow-up is in the outline stage. Jonathan works as a drum teacher, personal trainer, and audiobook narrator. He and his wife enjoy life in sunny Southern California.