Writing Into the Blind 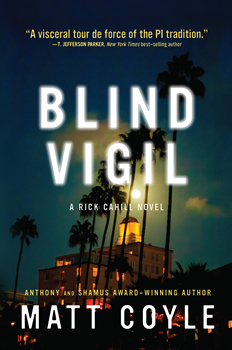 Matt Coyle pulls off an amazing feat in his new thriller BLIND VIGIL—hard-boiled detective hero Rick Cahill somehow solves a baffling murder case without being able to see! Blinded from an earlier gunfight, Cahill has to investigate the crime without the sense he’s taken for granted his entire life.

Did Coyle have any second thoughts along the way about writing a blind protagonist? “Ha! I had second, third, and fourth thoughts while writing this book,” he says. “As I write Rick Cahill in first person, I found it difficult to describe scenes when he couldn’t see. I had to rely on his other senses and his memories of areas he’d been to when he could see.”

Coyle had set up the blindness at the end of the last Rick Cahill book, Lost Tomorrows, and says he was determined to follow that storyline in BLIND VIGIL, the seventh in the award-winning series.

“As difficult as the write was, I felt if Rick’s vision would have returned between Lost Tomorrows and BLIND VIGIL, it would have lessened the impact and significance of what happened to him at the end of the last book.”

The story begins when Cahill’s longtime PI partner, Moira MacFarlane, asks for his help on a case. She’s been hired by Rick’s former best friend, who wants to find out if the woman he’s in love with is cheating on him. When the woman is found dead, the friend becomes a suspect in the murder—and Rick decides to try and help clear him despite his own lessened capabilities as a PI.

Coyle obviously had to do a lot of unique research in order to write a blind character. “The one thing I wanted to portray was how Rick, a flawed human being who is hardwired to deal with obstacles in a mostly unhealthy way, would react to his changed circumstances,” he says.

“I talked to two vision-impaired women who lost their eyesight when they were adults. They were incredibly forthcoming and helpful, and I dedicated the book to one of them, who lost her vision in a horrific car accident when she was 19,” Coyle says. “I’m sure I got things wrong. The book is in no way to be seen as a universal way that people react to, and deal with, vision impairment.”

Coyle even went so far as to imagine himself blind at times and try living in Rick’s sightless world as he wrote the book. “Yes, I did act out living without eyesight a bit. I bought a white mobility cane and walked around my house and outside with my eyes closed a number of times.”

We asked him to describe Rick Cahill—and talk about how he’s changed (and remained the same) throughout the series.

“Rick is a former cop who’d only served a couple years on the Santa Barbara Police Force before he was arrested for his wife’s murder,” Coyle says. “He was never tried, released, but never exonerated, and for years was thought by many to be a guy who got away with murder. He lost his job as a cop and went back to his hometown of San Diego, where he eventually became a private investigator.

“Rick’s distrustful of the police and all institutional power structures and sometimes makes bad decisions in his quest for the truth. He lives by the code handed down to him by his late father, who had also been a police officer: Sometimes you have to do what’s right even when the law says it’s wrong.

“Rick’s life has changed when BLIND VIGIL begins. Obviously, he’s lost his eyesight, but he’s also in a committed relationship where he has to think about someone other than himself. Additionally, he’s quit being a private investigator, something he’d decided to do before he went blind. I wanted to see how he’d deal with life without being able to follow his restless sense of justice. I added an extra obstacle of being blind to force him to have to rely on other people, something he’s not good at.”

Despite the serious nature of some of the subject matter, there’s a lot of funny moments too, including some references to the old TV show Longstreet, which was about a blind detective. Was Coyle a fan of that show?

“I managed to watch a little of one episode online that someone had posted. As best I could find, no streaming service has Longstreet. I watched the show way back when and liked the idea that Rick had no idea what one guy was talking about when he mentioned Longstreet.”

There are also some wonderfully moving moments between Rick and his dog Midnight—which Coyle says are based on his own experiences with his dogs over the years.

“Anyone who follows me on Facebook knows I’m a dog lover and has seen my yellow Lab Angus’s couch yoga photos. However, Midnight is taken mostly from Magic and Brody, two black labs I had at different times years ago,” he says. “All dogs are special, and Midnight’s loyalty is taken from every dog I’ve been fortunate to have during my life.”

Coyle recently left his nine-to-five job to write full time—which he says required some adjustment in his writing habits.

“Initially, I had a hard time finding a set routine. I now had all this time to do other book-related things other than writing, like more marketing and saying yes a little too often to outside projects,” he says. “I’d had a set routine for 17 years while I worked the day job. I didn’t really have options with my free time. I had to use it to write. It took about six months, but I finally found my groove and am now getting more writing done and about the same amount of marketing and outside projects that I used to.”

“On Crime Corner with Matt Coyle (there’s another podcast called Crime Corner), I interview people from all facets of the crime community, focusing mainly on crime fiction writers. However, I’ve also talked to true crime writers, marketing specialists, mystery fans, a mystery podcast pioneer, and my agent,” he says. “The show airs, roughly, every other Friday on the Authors on the Air Global Radio Network.”

What’s next? “I’m just making the final edits on the eighth Rick Cahill novel,” Coyle says. “If I had a title, I’d give it to you.”