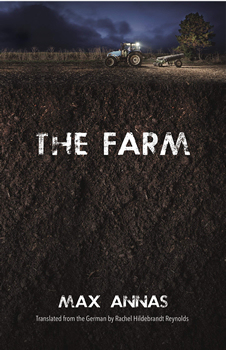 Max Annas used to live in South Africa, where he taught at the University of Fort Hare before he returned to his homeland, Germany. He now lives in Berlin but still visits South Africa regularly. Annas’s background is in journalism, and he’s published in the nonfiction arena in culture and politics. His work is widely acclaimed.

His first novel, The Farm, is set in the Eastern Cape of South Africa and was recently released in English by Catalyst Press in North America and by Lapa in South Africa. The novel finished third in the 2015 German Crime Prize and is currently under film production in South Africa.

The novel takes place over some eight hours. The Muller farmstead is attacked by a gang, and the Muller family, their workers, and several visitors are trapped inside the house. There is no way to call for help. No one appears to know what the attackers are after—there are too many of them, and they are too well-armed for a simple farm robbery. However, the farmers, too, have a good supply of guns, and the advantage moves from attackers to defenders and back as they try different strategies. But men and women on both sides are dying.

Tension and intriguing characters make this a book you shouldn’t start until you have enough time to finish it. It’s hard to put down!

In this exclusive The Big Thrill interview, Annas talks about inspiration, writing an action thriller set in Africa, and the challenges of writing a novel that takes place over just eight hours.

What motivated you to write a thriller about a farm attack set in South Africa in the first place?

When I was living in South Africa, attacks on farms were a highly disputed matter. I wanted to look closer into it. Talking about it, there were, and there still are, two factions, and they are both lying. White people deny that they are responsible for the (political) situation in which you are attacked when weak—and in a farmhouse you are very weak. And the Black elite talking about the land question is hiding the fact that they want the land for themselves—not for the Black poor.

Although The Farm is an action thriller, it exposes contradictions in modern South Africa—the yawning gap between poor rural Blacks and the generally White landowners, for example.  Would you comment?

I don’t see the “although.” A thriller, call it an action thriller or something else, is the best way to deal with contradictions and conflict. It begins with the very first sentence of the book, spoken by farmer Muller: “I am not a racist.” It’s the culmination of all contradictions of White life in South Africa.

The story is told from the points of view of several of the characters, each giving their own perspective of what’s happening and their reactions more or less at the same time. Why did you choose that writing approach for the novel?

It’s an antihero approach. THE FARM deserved an ensemble of main characters instead of a leading woman or leading man. Only through different eyes, a lot of them, am I able to offer my view on what above you call contradictions in modern South African life. And then… as the outsider I am in South Africa, with my first 44 years spent in Germany, it seemed easier to offer these different viewpoints than loading the baggage of the whole story on the back of one main character. That figure would have had too much to carry.

The Mullers are a close family, but they react in quite different ways to the attack. Although the patriarch of the family, Franz Muller, had absolute authority when he had control, he is unable to lead. Neither can the Black policeman with him. That role falls to Mrs. McKenzie, a woman visiting Muller’s wife. Were you exploring the varied reactions of different individuals to life-and-death stress?

Franz Muller is the boss, undoubtedly. But only under normal circumstances. And that night on the farm is nothing normal. Muller sees his property attacked and also his family. And he doesn’t know by whom. The policeman is in a hostile—White—environment. So the role to act with decisiveness and responsibility for all falls to a different person. Plus: Muller’s interest IS property and family and, maybe, his workers. And that’s it.

Jayne McKenzie is an interesting character. She used to hunt with her husband and has real skill. All the other women in the house expect the men to do the shooting. She has a deep faith, but at one point thinks: God is great. But there are situations in which you need to take care of yourself. Is she the pivotal character in the story?

In a way she certainly is. I wanted to have a character far away from myself to be the main force in the action scenes—and of course far away from the usual action (film) narratives where (relatively) young white males are responsible for saving the world. She is not young, she is religious, and she is intelligent. I admit: For the first time in my life I fell in love with a religious woman.

The Farm takes place over just one night. At a certain point, the wives and girlfriends of the Black workers trapped in the farmhouse set out to discover what’s going on, armed only with a revolver they don’t really know how to shoot. Why did you decide to bring them into the action?

It’s what you expect from a comedy. People from all directions coming to the center of the action, creating chaos. I wanted to use it in the thriller. And then…the story is set on a South African farm, and I was wondering what these women would do? So I brought them in.

The leader of the attack is a city gangster from East London. He has a plan and a group of well-armed men with him. It was meant to be a clean hit—take everyone by surprise, kill them all quickly, and grab the loot. But his men are enthusiastic rather than accurate shooters. Once faced with taking the farmhouse against equally well-armed people fighting for their lives, he has no plan B. Is he also an amateur, or is he just out of his natural environment?

Aren’t we all amateurs? We learn, we develop until we face a task which is too big for us. Let me put it like that. Crime in South Africa never is perfect. Be it on street level or in government, it’s always full of plot holes. What I needed, and what I wanted, was a situation that is just too much to understand for every individual involved. From a certain moment on, every figure has to start from zero.

I am writing a novel which is set in the FRG. Do you still remember that acronym? It means Federal Republic of Germany, commonly called West Germany. After two books set in the GDR (East Germany) I now will look at the time shortly after what we call Deutscher Herbst (German autumn), when the authority of the government was attacked by a group with weapons and the following propaganda. The year is 1978.