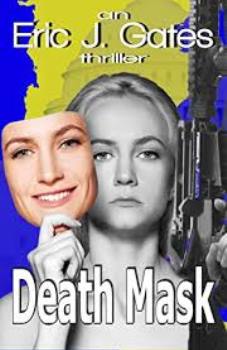 A bookstore owner who used to be an elite government agent working on deadly covert missions. She has left all that behind and become someone else, found a new, fulfilling life, even a new family. Then, when least expected, her past comes knocking on the door with an order to kill her.

The Notorious Minds box set contains 20 original crime, mystery, and thriller tales that explore many different manifestations of the thriller genre. My own contribution, DEATH MASK, is a techno-thriller which examines the precipitous use of cutting-edge technology by the intelligence community from the perspective of an ex-operator of a highly secret military unit who constantly used false identities in the course of her work and is in the midst of a personal identity crisis.

I have always loved thrillers above all else as they allow the author to reflect upon major social issues in the context of a fast-paced, entertaining story that pushes the boundaries of aspects of our modern society such as personal privacy, government surveillance, the unbridled use of new technology and its consequences.

Like many, I had my own thoughts about the use of advanced computing systems to better the lives of everyone, and especially when the marriage of different aspects can produce unforeseen and unwanted consequences. During the writing of the tale, I was surprised to discover how the “villain” of the piece was really acting well within the laudable parameters of the project, despite the deadly outcome of their decisions.

The tale is told from the point of view of the protagonist. She had struggled to rationalize
all she did when working for the unacknowledged covert unit, eventually leaving after eight years. Now, years later, she thinks she has a good life, living with a widower and his two sons and running a small business in Albuquerque, N. Mex. Then her new world is first shaken when her lover proposes. That very same night, in a street near where they live, a whole family is executed by a professional hit team. It’s not long before she realizes the killers had made a crucial mistake: She and her new family were the intended targets!

I have always acknowledged being influenced by three authors: Ian Fleming, for his economy in the use of words to tell fast-paced tales; Charles Dickens, for his ability to analyze and criticize social situations through what, for its day, were thriller novels; and British author John Gardner, who also wrote 16 Bond novels, as well as many other thrillers, for his ability to incorporate dark humor throughout his stories and enhancing the storyline using this device.

Again, I have a female protagonist in my story. This is a common theme in almost all my novels, and, for a male writer, presents a unique set of problems to produce a convincing, in-depth character who is not just a stereotyped male in a female appearance. This is not
something I started doing because it has become fashionable—I predated the fashion by many years—but it allows me to create what has been described as “thrillers for women” by one reader, where all the stereotypes are thrown out at the beginning.

Multiple award-winning author Eric J. Gates has had a curious life filled with the stuff of thriller novels. Writing operating systems for supercomputers, cracking cryptographic codes under extreme pressure using only paper and pen, and teaching cyberwarfare to
spies are just a few of the moments he’s willing to recall. He is an ex-international consultant who has traveled extensively worldwide. His specialty, information technology security, has brought him into contact with the military and intelligence communities on numerous occasions.

He is also an expert martial artist, holding 14 black belt degrees in distinct disciplines. He has taught his skills to police and military personnel, as well as to the public.