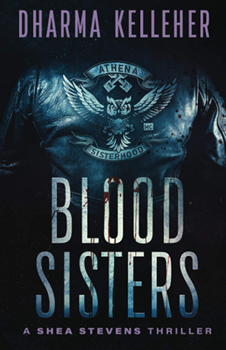 Dharma Kelleher writes gritty crime fiction with a feminist kick and is one of the only openly transgender authors in the genre. BLOOD SISTERS is the latest in the Shea Stevens Outlaw Biker series. PI fiction blog Sons of Spade says, “Shea Stevens is absolutely one of the more original crime fiction heroes to come along since Lisbeth Salander.”

In BLOOD SISTERS, Shea offers the protection of the Athena Sisterhood Motorcycle Club to a troubled woman, but the powerful politician this woman is running from will do anything to conceal a dark secret. Meanwhile, a rival biker gang the Sisterhood put in prison has been released, and they are out for payback. Shea calls in some old favors, but will it be enough to keep the high desert streets of Cortes County, Arizona, from running red with blood?

In this interview with The Big Thrill, Kelleher discusses the latest book in a series inspired by the Sons of Anarchy franchise, what fans of the Shea Stevens Outlaw Biker series can expect next, and more.

Shea has an interesting backstory—ex-con, grew up in one motorcycle gang, went on to lead a different, female motorcycle group (somehow “gang” doesn’t seem like the correct term for them). I’m always interested in how an author comes up with both the character and the plot. What’s your inspiration?

I was a big fan of Sons of Anarchy. A lot of interesting, complex, flawed, and conflicted characters centered around the culture of motorcycle clubs (aka MCs), which tend to be sexist, racist, and often outlaw, though not exclusively so.

At the same time, for several years, I was a member of an all-women motorcycle riding group (not an MC). It too had its flaws, which I won’t get into.

But the two influences made me want to create a story about a woman born into the MC culture who tries to break away from it but realizes it has shaped her more than she realizes. Thus, Shea Stevens was created.

You mentioned you want to offer a world from the perspective of diverse, marginalized people. Can you expand on that?

I am a transgender woman and a lesbian. I came out about three decades ago.

In crime fiction, trans people are usually depicted as sex workers, murder victims, and/or the butt of humor. The representation of other marginalized people in crime fiction, including other queer communities and people of color, isn’t much better.

I started with the Shea Stevens outlaw biker series. Shea is a lesbian. But after the first two books in that series were published, I decided to write a series from the perspective of a transgender woman working as a bounty hunter.

Justice can mean different things to different people. Do you feel a drive for justice should override the rule of law? Do you think justice is possible under our current law?

Big questions! I spent the first two decades of my life presenting as a White, heterosexual male in America’s Deep South. I wrongly assumed everyone was treated basically equally.

When I came out later as a transgender queer woman, I realized the deck was definitely stacked against me. I lost everything. My marriage, my family, my friends, my church, my job, and my home. All because I wanted to live as my true self.

And when my wife and I got married more than 20 years ago (only because of a temporary loophole), our marriage was in legal limbo because we were of the same sex until the US Supreme Court legalized same sex marriage. And now, once again, that may be in jeopardy.

We have seen over and over in the past decade or so cops murdering innocent, unarmed people of color, largely Black men. And the cops are rarely held accountable.

At the same time, we’ve seen White men convicted of rape get off with little more than a slap on the wrist with judges more concerned about the rapist’s future than that of his victims.

The legal system (which I refuse to call a justice system) is designed to maintain power for wealthy, White, cis-het men. It allows for women and minorities to be harmed with little recourse and for guilty White men to be protected, no matter their heinous crimes, including rape and murder.

I do not think justice is possible under our current law, and certainly not in the hypocritical way it is enforced. We have seen this year a strong pushback against this biased legal system, all while enduring a president who enables and encourages violence against the already oppressed.

The start of the LGBTQ rights movement didn’t start with quiet, peaceful protests. It started with riots at such places as Compton’s Cafeteria in Los Angeles and the Stonewall Inn in New York City. Because we were tired of being victims of police violence. And now we are seeing that in the Black Lives Matter movement.

Because what has been happening is that law enforcement agencies have been engaged in an undeclared war against Black and brown people. The bodies continue to pile up. And when the murderers are not held accountable, the oppressed will fight back. If supporters of law enforcement don’t want cops to be ambushed and murdered by civilians, then the cops need to stop murdering unarmed civilians. You can’t have it both ways. You can’t expect communities to be brutalized and just take it.

The solution is reform. Major reform. I don’t have the answers. But so long as the systemic oppression remains against LGBTQ people and people of color, we will continue to fight back by any means necessary.

The series has been primarily action/adventure, yet in BLOOD SISTERS, you’ve chosen to explore Shea’s vulnerable emotional side. What led you to change directions?

I think I explored her vulnerable side in the first two books as well, but perhaps more so in this book. Maybe it’s because I’m getting older and feeling more physically vulnerable myself.

I wanted Shea to begin to understand that being an army of one isn’t always the best answer. Especially when she had the responsibility of raising a child. She realizes that her actions now have consequences for more than just her.

Both motorcycle clubs appear in all three books of the series. Does the connection to Shea’s father’s old gang represent something, or is it simply an established nemesis?

Getting Freudian on me? LOL.

In terms of the story, it is both an established nemesis and a representation of how difficult it can be to extricate ourselves from the influences and consequences of our past. Our families of origin shape us on a fundamental level, and sometimes not in the best of ways.

As people have become increasingly mobile, the concept of family has also evolved. Since Shea’s parents are not in the picture, how has she created a new family? Do you also find this reflected in modern society as well as in novels?

She’s created a family at the motorcycle shop that she co-owns with her partner Terrance. She’s also her niece’s legal guardian. And now she has the Athena Sisterhood.

I find this especially reflected in the LGBTQ community, where queer people are all too often rejected by their families of origin. So to survive, we must create our own families.

Since coming out decades ago, I have had multiple mothers and aunties, countless siblings of choice, and have served as a mentor for many others.

I am currently working on a prequel novella in the Jinx Ballou Bounty Hunter series, which I hope to release middle of next year. But it won’t be for sale. Instead, it will be available for free exclusively to subscribers of the Dharma Kelleher Readers Club. Anyone can join by going to my website and entering your email in the form at the bottom of the page.

I’ve also started designing my own covers. I used to be a web designer/developer, so I have some graphic design experience. And I’ve been upping my Photoshop skills to create my own covers.

Dharma Kelleher writes gritty crime fiction with a feminist kick and is one of the only openly transgender authors in the genre. She writes the Jinx Ballou Bounty Hunter series and the Shea Stevens Outlaw Biker series. Her work has also appeared in anthologies and on Shotgun Honey.

She is a member of Sisters in Crime, the International Thriller Writers, and the Alliance of Independent Authors. She lives in Arizona with her wife and her feline overlords.