Minnesota in Her Bones 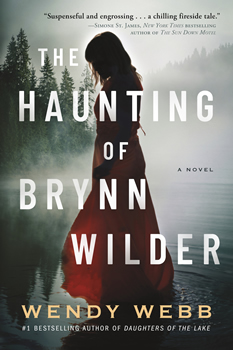 Wendy Webb has Minnesota in her bones—she was born and raised near Minneapolis in a family whose ancestors had traveled from Finland with a Bible in hand more than 100 years earlier. Webb graduated from the University of Minnesota, and after a stint in France and Washington, D.C., returned to the land of 10,000 lakes to work as a journalist and editor.

This attachment to the area, coupled with Webb’s fascination with Victorian mansions and their haunted lore, led this Queen of Northern Gothic to tell stories of modern-day Minnesotans discovering the secrets of generations past.

With all of her novels—from her debut The Tale of Halcyon Crane to last year’s Daughters of the Lake—Webb grips readers with mysterious characters, suspenseful plot twists, eerie ghosts, and of course, the dangerous and alluring Lake Superior. As Webb says, “My goal is to give the reader a story they can’t stop reading.”

She does just that in her latest novel, THE HAUNTING OF BRYNN WILDER.

In it, college professor Brynn arrives at a quirky boardinghouse for a summer after an agonizing familial loss. While recuperating and visiting her friend Kate Granger (from Daughters of the Lake), Brynn begins hearing her name softly called at night, leading her to a locked, abandoned room and the ghostly lady that may or may not inhabit it.

During the day, Brynn can’t shake the spooky dreams she has that inexplicably signal real-life events. Nor can she resist the charms of a fellow boarder whose elaborate tattoos raise more questions than they answer. As Brynn struggles to sort out what’s true from what’s in her imagination, she battles the ominous forces that haunt the house while discovering a time-bending secret to unlock her future destiny.

In this exclusive The Big Thrill interview, Webb shares insight into her writing process, tells us more about her latest page-turner, and teases her next project.

THE HAUNTING OF BRYNN WILDER is set in the same world as Daughters of the Lake. What inspired you to tell another story in the fictional town of Wharton?

I love books that are set in the same place, so readers (and the writer) can really stretch out and explore life in a town, the characters, and the nuances of what makes that place unique and story-worthy. But I don’t necessarily want to write sequels. I’m not ruling that out, but for now, I thought it would be fun to set stories in the same town and have characters from previous books filter in and out, but have the main emphasis of the story be on a new character and what’s happening with her. I’m in love with the town I’ve created in Wharton. I love the vibe, I love the characters that have come to life. Wharton is based loosely on a real town, Bayfield, Wisconsin, which, according to locals, is a very haunted place. But everything that I’ve written about it, and all the people in it, come from my imagination.

The character of Dominic is a magnetic, mysterious person. Was he based on someone you knew in real life?

Yes, indeed. Dominic was inspired by a real man who came into my life not long after my mother died. In real life, I call him the Illustrated Man, because, like Dominic, he is illustrated. The book, The Illustrated Man by Ray Bradbury, is one of my favorites, and the intersection of that spooky, sci-fi tale and the real man sparked my imagination.

The past and present (and even future) play key roles in your books. Was that something you consciously incorporated into your novels or discovered organically?

It sort of developed organically, but the concept of time really intrigues me. I love the idea that past, present, and future can all be existing at once, and it might be possible, for a quick moment, to stumble through whatever barrier separates them.

Similarly, I love how the grand Victorian mansion is almost like a character in your stories, in the tradition of Rebecca and other gothic classics. Did you grow up in a large old home or, like me, wish you did?

I did not grow up in a grand mansion, nor do I live in one now. But I love them, and they inspire me.

The one and only time I’ve seen Lake Superior, I was in awe of the tumultuous vastness of it. It was a windy day and I thought, “Wow, I don’t want to fall off a boat into those waters.” Was that power what drew you to set your stories there?

You were very lucky to visit Lake Superior on a windy day! That is when the lake is at its most magnificent and powerful. I grew up in Minnesota and lived on Lake Superior for 16 years. The lake is soul-restoring, comforting, terrifying, and life-giving to all who know it. The Native people who lived here before any of us believed the lake was a living thing, a great spirit known as Gitchee Gummi. They believed it could smile on or scorn anyone who tried to cross its waters. Today, you’d be hard-pressed to find someone who will go on record contradicting that.

THE HAUNTING OF BRYNN WILDER’s plot is cohesive and tight. Do you map out any ideas before you begin writing?

I’m a seat-of-my-pants writer. I’ve tried to outline books in the past, and I get really bored if I already know where the action is taking me. I like discovering the story in much the same way a reader discovers it. That’s the fun of writing for me. I’m eager to find out what’s going to happen next and delighted when I do.

Also, the chapters are nimble and of similar length. How do you approach shaping chapters?

I like to write a scene in one sitting. I will never stop writing mid-chapter or mid-scene, whether it’s just a few pages or a few thousand words. I also like to end with something that’s not only a chapter break, but a reason for the reader to turn the page.

Are there any books you’ve read lately that you’d recommend?

Do you read your reviews? If so, how do you cope with the ones that don’t connect with your work?

That’s the question! People tell authors not to read reviews. Of course, we all do. Especially during a book release (like now) when reviews are popping up online every minute. You have to try to stay away from them for your own sanity. But sometimes, I’ll get something positive or negative from reviews that I think about when I’m writing my next book.

Do you have any new ideas for another novel? What are you working on and what might readers look forward to?

Yes! I’m on the home stretch of my next novel, set on Ile de Colette, which readers of Daughters and Haunting will know as an island a short ferry ride away from Wharton. The only thing I’ll say about it now is it has a decidedly Grimm’s Fairy Tale vibe.