An Adventure Thriller with Revolution and Natural Dangers 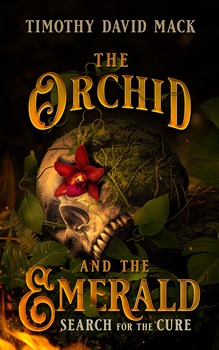 When Kevin McNeill visited the Biltmore Estate in North Carolina in 2012, he had no idea he’d soon be writing a book inspired by it. After touring the American chateau and its lush conservatory, McNeill’s wife, Sheila, suggested he write a story about the nineteenth-century orchid hunters who had furnished the original orchidarium. Since Sheila was undergoing treatment for cancer at the time, she urged Kevin to take on the project as a diversion.

Kevin had always been a fan of historical fiction and knowing his friend Timothy Wendland was as well, he invited him aboard his new project. And since McNeill’s son, David, enjoyed writing fiction himself, he invited him on as an editor. Now, several drafts and several years later, THE ORCHID AND THE EMERALD premieres, packed with historic adventure and exotic thrills.

The story follows former British soldier William Gunn who’s recently returned home from the Napoleonic wars. As a gardener, William is content to start life anew until his daughter Sarah becomes mysteriously ill. With the support of his boss, the Duke of Devonshire, Gunn sets sail for the new world of South America in search of a rare cure from the famed and hidden black orchid plant. 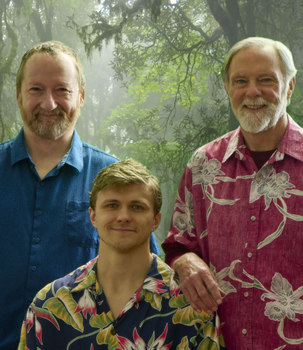 In parallel time, American Nathaniel Yankee has landed on the continent to escape a troubled situation back home. After joining General Simón Bolívar’s revolution against the Spanish, Nate strikes out to find his own legendary prize, an emerald the size of a human fist.

With the Spanish at their heels and the wilds of South America ahead, Gunn and Yankee team up to survive. They struggle through the dangers of the Amazon rainforest, active volcanos, and mountainous high-plains, and that’s after fighting with Bolívar’s battalion! There’s rollicking good fun in this adventure thriller as the two encounter everything from jaguars to head hunting tribes until they realize that the biggest battle is against those with the most money and power.

The Big Thrill spoke with Kevin, Timothy, and David about their new thriller, their interest in military and seafaring stories, and how three minds work together to create one book.

In THE ORCHID AND THE EMERALD, the character of William Gunn is searching for a black orchid whose medicinal properties might help his ill daughter. What spawned your interest in 19th century plant exploration?

After reading a brief synopsis of orchid hunting at the Biltmore Estate, we decided from the very start to focus on the story of the 19th century orchid hunters and the “Orchid mania” they inspired. It was fascinating to discover that this “mania” started when extremely wealthy patrons would retain naturalist-adventurers to search unexplored regions of the world for exotic, new varieties of orchids, for the sole purpose of “showing a new orchid off” in the comfort of their homes to the envy of their guests. Incredibly, most of these orchid hunters never returned, dispatched in strange corners of the world in an amazing variety of ways. As you can imagine, this ignited our interest in 19th century plant exploration. 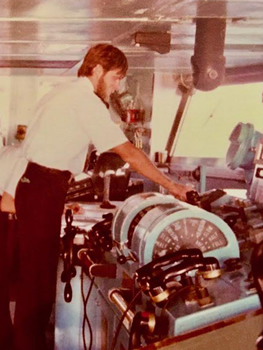 Kevin McNeill as deck officer on a blue-water research ship in 1978, docking in Miami

The book’s early sections reminded me of War and Peace but instead of spending time with Napoleon, we meet General Simón Bolívar. Are all of you interested in military history?

Kevin and Tim more so than David. We had read historical fiction for decades, and much of that genre touched on military history. Authors such as Bernard Cornwall, Morgan Llywelyn, Patrick O’Brian, James Thom, Stephen Crane, and Wilbur Smith, among others, were incredibly appealing. We feel the Pulitzer Prize winning Tales of the South Pacific by Michener and The Killer Angels by Shaara, deserve special mention.

How did you research the history of the Spanish colonies’ independence? Was that a topic one or more of you were always interested in or was it a new interest?

Our interest was triggered by the early exploration for orchids, the principal place for that being Colombia. We also wanted our British protagonist to have been in the Peninsula War as well as at Waterloo, so that set the time frame. We then looked for the cracks in which we could have our fictional characters move and realized Bolívar and his revolution was a major influence on anything happening in northern South America during that period. This left a marvelous opportunity for us to have our protagonists not only meet Bolívar, but to fight in a pivotal battle in his war for independence. And we discovered this is something most people in North America know very little about. One thing tends to lead to another, and this led us to discover the South American revolution as a rich source of material. 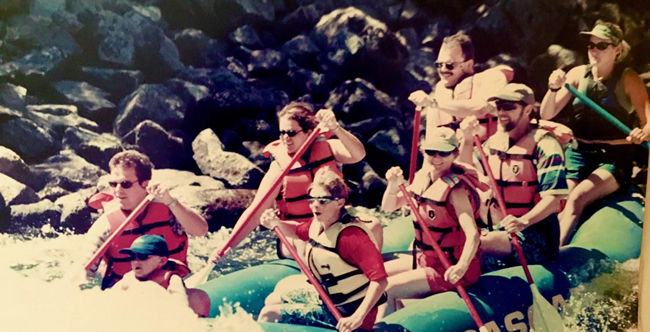 The McNeill family rafts the Payette River, Idaho, with David leading the way, in the summer of 1996.

The book also reminded me of the Patrick O’Brian Aubrey-Maturin series. Your book is also rich with seafaring and exploration. Did any of you read that series, and if so, which was your favorite book?

Kevin and Tim: We both read O’Brian’s complete, 20-book series. We’re great fans, and even the mildest notion of us being compared to O’Brian makes us blush. His Master and Commander is a masterpiece!

The plot springs from two quests: Nate’s for the most valuable emerald in the world and William’s for the black orchid. How did those two quests form? 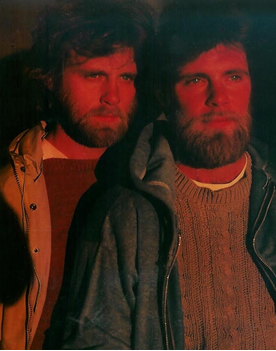 Kevin and David: The genesis of the black orchid plot was a brainstorming session in our kitchen with Sheila. Together we arrived at a black orchid as the object of the first quest, because a truly black orchid is unknown in the wild. We speculated that a flower rumored to have amazing curative powers that was not yet exploited could only exist in the vast unknown Amazonian rainforest. Only a quest borne of absolute desperation would lead one to the dangerous, unmapped interior of that territory. While performing background research on northern South America, we happened to stumble across information about a magnificent jewel from the Muzo mine in what is now Colombia. Further investigation not only revealed the gemstone to be the largest uncut emerald in the world, but that it was part of the estate of the Duke of Devonshire. And no one really knows how it got there. Excellent crack in time for our characters to step into…

Along those lines, the book’s packed with adventure and danger, both man-made and natural. It’s almost like an Indiana Jones movie. Were any of you adventure book readers when you were younger?

We all read many of the classics as youths.  We cut our teeth on Walter Scott, Jack London, Henry Haggard, Charles Dickens, Tolstoy, Richard Henry Dana, and others such as Stephen Crane, Wilbur Smith, Thomas Berger, and so on. 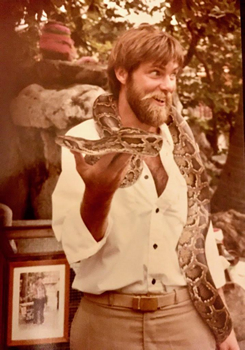 Kevin McNeill on a construction contract in 1981, being charmed by a snake in Thailand

Real-life historical figures seem to play an important role in your character creation. Can you talk about how you became interested in Jussieu, Chesterton, and other people? And how you decide what to keep true and what to fictionalize?

What’s it like to write among three people? How does that process work?

There’s brainstorming at the beginning to set a rough story outline, then everyone assumes a role and sticks with it. This is especially important in order to maintain consistency in the characters, and continuity of voice throughout the novel. 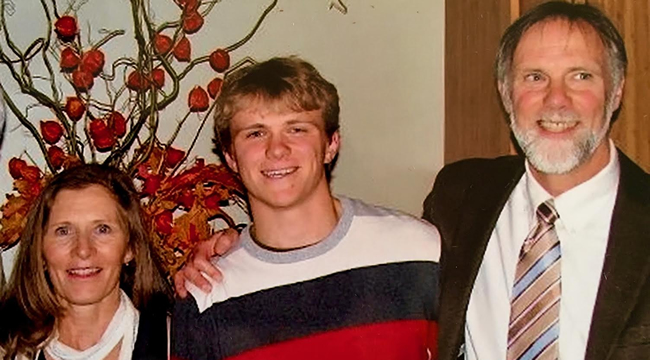 Sheila and Kevin McNeill visit David at Yale in April 2012.

It looks like Book Two will be set in the Far East. Can you give us a preview?

In Book Two, William and Nate’s mission to South America unravels, resulting in a pursuit to the Far East threatening to upset the fragile peace and send the world’s great powers spiraling into chaos.

What advice would you give aspiring writers of historical adventure thrillers?

Gabriel Garcia Marquez provides an excellent description of the arduous process of writing historical fiction in the Acknowledgement section of his novel The General in His Labyrinth. We would agree with him that an enormous amount of research is necessary, and even then, there is a great potential for egregious errors. If a person does want to tackle a historical novel, we suggest working to a solid outline, having a method beforehand to systematically sort and file information, prepare to fact-check time and time again, and don’t shy away from revising. Marquez went through seven revisions of his novel before publication—which made us feel good about our five drafts. 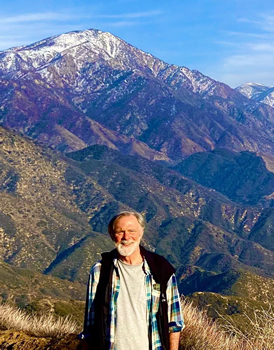 What about writing makes you happiest?

Tim: The actual writing of the chapters. Much of our efforts are spent on research, developing a plot, and planning the book—but once you get all of your ducks in a row, it’s time to become productive!

Kevin: I enjoy creating a sensible, fun, and exciting story that people take pleasure in and want to read.

David: If I can provide catharsis to a total stranger through writing, it feels as if we’ve communicated on the most authentic level. And when I’m able to affect an audience, it feels like they’re able to see me more clearly than in real life.