The Dramatic Tension of Mothers and Daughters in a Small Town 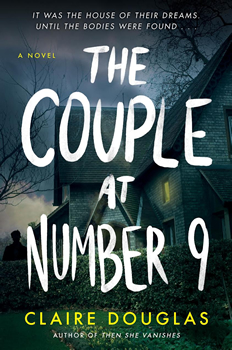 Unlike the characters in her new novel, THE COUPLE AT NUMBER 9, Claire Douglas has never lived in a cottage in the Cotswolds. But she knows the experience of small-town life well, having grown up in one in South Gloucestershire. Back in her youth, she fell in love with the written word, reading the likes of Agatha Christie, Enid Blyton, and Phillipa Pearce, and wholeheartedly decided to be a writer at age seven.

Now, an internationally recognized bestselling author, she still sees setting her books in small towns as a natural fit. She likes how an isolated setting can create an eerie, menacing atmosphere. “Everyone knows everybody else,” she says. “It’s a great way of building tension and claustrophobia.”

But Douglas is also drawn to the culture of a city. After having lived in London in her twenties, she and her husband moved to the ancient city of Bath after having children, a place that drew them because of its proximity to grandparents. “We liked that it was a small city, but it had the buzz of cafes and galleries. I have met so many local authors, so it feels like a real community.”

Before she was a novelist, Douglas spent 15 years as a journalist, writing for women’s magazines and newspapers. She tried her hand at novels and encountered her fair share of rejection and discouragement. But in 2013, she entered her novel, The Sisters, in the Marie Claire Debut Novel contest and to her shock, won, which garnered a contract with Harper Collins in the UK. Since then, Douglas has published seven bestselling thrillers that have been translated into 20 languages. She’s prolific, usually releasing a book annually, and says the key is to write every day—and drink lots of tea!

The Big Thrill spoke to her about THE COUPLE AT NUMBER 9, themes of female friendships and family ties, and how to craft a thrilling puzzle of a plot. 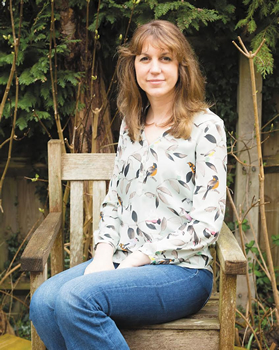 The relationships of sisters, mothers and daughters, and close friends run throughout your books. What draws you to these relationships in terms of storytelling?

I love the dynamics of female friendships, and I’m fascinated by the bond between mothers and daughters or sisters. I’m lucky I’m close to both my sister and my mother but I think it can really add to the tension of a thriller if the main protagonist isn’t necessarily close to their female relations. It’s that old adage of being able to choose your friends but not your family. I think it’s something a reader can immediately relate to—most of us have had experience with a female friendship that might have gone wrong.

All of the female characters in THE COUPLE AT NUMBER 9 are multi-dimensional, but I found Lorna to be the most compelling. She’s formed by her past and imperfect for it, yet she still has a future where perhaps she can live a healed, more redeemed life. How did her character develop?

At first, Lorna was based on my stepmother—my stepmum is very gregarious and fun and attractive and loves travelling, and it was her who I first pictured when I had the idea of Lorna. But that was just the starting point—Lorna and my stepmother are actually very different, age being one of them (my stepmum is in her 60s.) Lorna has her own past story—her failed marriage, her teenage pregnancy, her tricky relationship with her own mother—which isn’t the same as my stepmum’s past at all. I also wanted a character who was completely different to Saffy (Lorna’s daughter). Saffy is quiet and conservative, whereas Lorna has a bigger personality which sometimes makes her daughter cringe. She’s made mistakes but wants to be a better person, mother, and grandmother. I loved the idea of these two very different women coming together and bonding over the events from their past and growing stronger as a result. 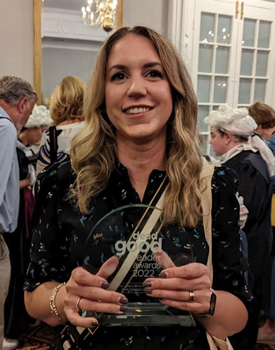 Douglas accepts a reader’s award for “Most Twisted Couple” for THE COUPLE AT NUMBER 9, at the Theakston Old Peculier Crime Writing Festival.

This book features four main alternating viewpoints. And they’re not wasted whatsoever. How do you decide who’s going to narrate and when? Do you mark that all out in advance?

I typically don’t plan my books that much in advance. I always know the big twist and how the book is going to end, but that’s as far as I plot. I like to feel the book as I write, to instinctively know when it’s the next character’s turn to tell their part of the story. I was unsure at first when to introduce Rose’s narrative, but I felt by Chapter 10 that the reader needed to hear from her. I wanted to leave it a while first though to let the reader get to know Lorna, Saffy, and Theo before writing from Rose’s perspective.

Perhaps, the most impressive thing about this book is its complex but well-constructed plot. The puzzle all fits together. Any advice on how to create a strong plot?

I found a text recently that I sent to my husband with a few sentences outlining the plot and what I wanted to achieve. And that was as far as I planned it. I knew the main hook, the twist, and the ending, but when I started writing, I had no idea that two of the characters were going to be in a relationship, for example, and that just evolved from the story. When I got to Rose’s chapters, I just started writing in the second person, so that she’s speaking to Lorna.

Along those lines, you drop a page-turning hook at each chapter’s end. How do you do that? Have you just developed a natural instinct for where/how to end a chapter?

I think because I love reading and have done so since I was little, I try and imagine myself as a reader when I’m writing. I try and think what would make me want to read just one more chapter. And I know it’s always the books that leave a little cliffhanger at the end that entice me to keep reading the most. Lucy Foley and Lisa Jewell do it really well, I think. 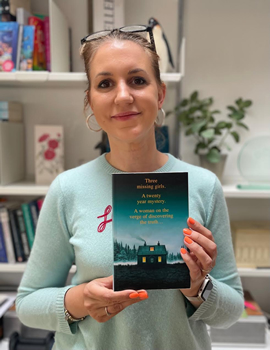 Douglas holds an ARC of her next book, The Girls Who Disappeared.

You’ve spent some time studying film and media. Can you talk about how that’s influenced or helped your work?

Films I’ve admired have taught me about narrative and pacing and what makes a story exciting and how to move it forward. For example, Hitchcock’s Rear Window. That film has everything: tension, emotion, character development, pace. And all set up in a confined space over a short period of time. Being a journalist has helped me stick to deadlines and I learned to touch type, which means, when I’m in the right frame of mind, I can get quite a lot of words down on the page at once.

Your ability to weave in small details that make your prose vivid is outstanding. You paint a picture for the reader, yet you keep the plot moving. Can you talk about your imaginative process? Do you ever daydream scenarios before writing?

Thank you so much. Yes, I think I spend more time daydreaming scenarios than I do actually writing! A lot of my time is spent thinking about the next chapter or scene. I usually write a chapter a day (if I’m having a good day), and I like to mull it over the day before. Usually when I finish a chapter, I’ll write a few sentences underneath about what I want to cover in the next chapter—but that’s as far as my novel planning goes. Before I start, I like to have an idea of my characters—what makes them tick, their likes and dislikes, their birthdays (I always like to know their birthdays even if it doesn’t make it into the actual draft), but my characters evolve as I write the book and I get to know them. 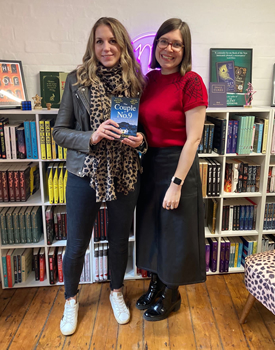 Douglas with her UK agent, Juliet Mushens of Mushens Entertainment

You’ve mentioned you like to write thrillers where a regular person stumbles into a crime. Who are some of your other favorite authors who approach thrillers that way?

Ooh my absolute favorites are Lisa Jewell, Clare Mackintosh, Alice Feeney, Gilly Macmillan, C.L. Taylor, and Louise Candlish. They all approach novels in this way and handle it so brilliantly.

Speaking of books, what are you reading right now? What’s a non-thriller book you’ve read recently that you liked?

I’ve just started The Family Remains by Lisa Jewell, and I’m already loving it so much. I can’t remember the last non-thriller book I read, but I’ve got a few to take on holiday with me, which include Lessons in Chemistry and The Paper Palace. I’ve heard great things about both.

What are you working on now? Can you give us a preview of your next novel?

I’ve just finished edits on my next thriller, which is called The Girls Who Disappeared and is about a group of teenage girls who drive home from a night out along a notorious, haunted road when their car crashes. The driver, Olivia, is the only one found at the scene and the other three have vanished. Twenty years later, a journalist called Jenna arrives in the town to make a podcast and to find out what happened to the three girls. It’s set in a small town (of course) where spooky things happen and there are rumors of a road ghost. I think it’s out in the US early next year.