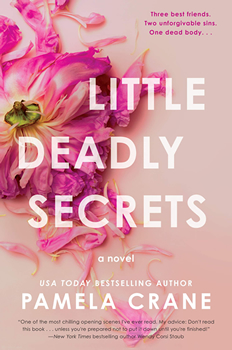 Three best friends since college experience a series of entwined crises in LITTLE DEADLY SECRETS by bestselling author Pamela Crane. Can their friendship survive the lies and betrayal that linger just under the surface?

“Lily was the natural-born leader, the hand-talking Italian, the rebel, the creator. She spoke life into action, and it obeyed. Robin was the planner, the organized one, the goody-goody, the glue. Her brilliance was not just in her sharp mind, but in the way she dotingly tended to people like flowers. Mackenzie was the sheltered Southern belle of the ball, except she had forgotten her worth long ago. She was the victim who didn’t know she could be the victor.”

Long gone are “the simple days” when the three friends had only school and boyfriends to worry about. Now Lily is divorced, Robin is married with four kids, and Mackenzie has a beautiful teenage daughter and a bastard of a husband. As each struggle with hardships, they weave a sordid tale of secrets, each life enmeshed with the other.

Mackenzie hates her husband while trying to deal with her teen daughter’s sexual awakening.

“It was a strange unexpected thought as I glanced over at the man I had married, wondering how the ugliest of hearts could be wrapped in the most beautiful skin. All I could remember right now was the way he hurt me. The way he betrayed me. The way he lied.” Mackenzie was lost in her routine of “obey, rinse, repeat.”

Robin is a shopaholic who tries to save her marriage to Grant while wrangling four kids and confronting her teen son about alleged sexual abuse. Robin admits she was “hiding her mountain of debt; Grant was hiding his calls. I guess we all had our hidden skeletons.”

Lily assuages her loneliness by having an affair with a married man who is strictly off-limits, which entices her even more. If Lily fulfills her desires, her “life would shift and shatter into unrecognizable pieces. She’d never be able to glue the shards back together. Lily’s first mistake was believing she was innocent. Her second mistake was believing her secret could stay hidden.”

The friends realize that “the time was ripe to remind the world that women deserved more, that women should never be silenced. And the time for men to get away with stealing women’s souls was over.” But can the friends overcome their weaknesses and learn to trust each other again? Will their “lifelong sisterhood” survive the burdens each suffers?

Pamela Crane speaks with The Big Thrill about the inspiration for the novel, the allure of secrets, her fascination with broken but strong women, and her journey as a “writing mom.”

What inspired the story of Mac, Robin, and Lily?

The year was 1999. My platform leather boots were all the rage. I was a freshman in college, modeling various Charlie’s Angels poses with my two best friends while someone took our picture. I came across that picture last year, fondly remembering all the trouble we three got into over the years. Nothing murderous, mind you. That photo inspired a story about friendship.

But you can’t be a thriller author without a dash of murder, so the story congealed further: what happens when one friend commits a terrible crime? Will they back her up? Then I took it one step further, because they’re not just three best friends. They are wives and mothers, and with family comes drama. When the families wage war on each other, can decades of friendship keep them together?

How has your fascination with lies and secrets formed the basis of your stories?

I was about six years old when I kept my first (memorable) secret from my parents. I had stolen my next-door neighbor’s Strawberry Shortcake doll because I loved how it smelled—it must have been some good-smellin’ plastic! Even from childhood we learn how to lie and keep secrets. And the deeper we bury them, the more they rot us from the inside.

Some kind of sin accompanies every secret—betrayal, manipulation, theft. And in my stories, murder. It all starts with something small, like hiding debt from your spouse, or lying about your past. That’s where the story begins—with tiny misdeeds covered up—but when all the compounded lies are unearthed and the victims of those lies react, that’s where the story gets unpredictable.

What about your passion for “broken women”?

I might be biased toward broken women because I’m the perfect example of this. I made some crazy choices as a young person (what was I thinking when I got that haircut?), and even crazier ones as an adult (so glad that tattoo could be covered up). Plus, I have four kids—what’s nuttier than that? My parents always told me I was attracted to “broken” people. It’s true. I gravitate toward those who don’t have it all together—the loveless, the addicts, the needy, the souls who feel too much or have gone through too much.

Maybe it’s because I relate to their flaws, or I see their flaws as character strengths instead. We’re all a little broken, aren’t we? Anyone who thinks they don’t have a little chip in their façade isn’t looking closely enough. But I’m looking, and it’s those broken chips I like to paste into my characters.

How does your belief that “friends are the roots of life” inform your novels?

Years ago, a family member told me that my desire to be an author was a pipe dream. I could have given up, but my best friend stepped in. Grabbed my shoulder. Looked me in the eye. Then told me to shove that lie into that pipe and smoke it. So I did, and here I am.

Friends are the constant in life who keep us grounded when we feel like we’re falling or flailing. Friends cheer for you. They don’t fight like lovers do, push buttons like our kids do, or heap expectations on you like family does. Friendship is the perfect relationship, because it can be liberating, refreshing, and drama free. Well, unless they’re in a Pamela Crane novel. Then there’s lots of drama.

What about your journey as a writing mom, and your statement “If your books were babies, they’d starve to death, because your real-life kids don’t give you a moment alone to write?”

When you’re a parent, your kids are a full-time job (can I hear an Amen?) Writing gets my leftover scraps of time. I’ve often heard the comparison of books being like babies born into the world (whoever coined that never had a natural childbirth, I bet). Well, in my life, thank God books aren’t babies, because when you have four kids, handle a horse rescue, and run an editing company, my writing (and my dear, sweet, patient, understanding husband) often take a backseat.

I can’t tell you how many times I’ve worked on the same paragraph for days because of constant interruption from the kids. Once, my husband counted the number of times the kids said “mommy” in ten minutes: 76! But just because my minutes are sparse doesn’t mean I don’t fit writing in. Instead of short writing bursts, I’ll take a week-long writing retreat and weekends hidden away in our 1976 Cousin Eddie-esque RV (don’t go falling in love with it!). Or I’ll slip in a few hours before bed.

But one thing I must reiterate: Motherhood never stripped my inspiration from me. In fact, it douses it with fuel. Motherhood arouses new ideas for characters and drama-filled days and terror-filled nights that form the skeleton for my domestic thrillers. Thank you, kids, for inspiring Mommy’s “murder books.”

Do you have advice for other “writing moms”?

Girl, I feel your pain! Finding time as a mom, virtual-learning homeschooler (boo, COVID-19!), and writer (while running an editing company on the side) is tough. But you don’t achieve great things by taking the easy path. My mom taught me that lesson through her life, working two jobs nonstop to put food on the table.

It’s hard making time to do what I love, and writing demands sacrifice, but if you love something, you fight for it. You work for it. You sacrifice sleep and TV for it. So that’s what I do. And when you can’t find the words to write, read. Read your genre. Read outside your genre. Don’t lose your passion for literature; keep the kindling lit.

Where did your Mental Mommy nickname come from?

My kids came up with the nickname. We even made matching T-shirts to commemorate it. It could have evolved because there are four of them and only one of me, and since they outnumber me, some days Mommy goes a little… well, mental. But when I asked my oldest where they came up with it, she told me it’s because of my books, since they know I write stories about domestic drama, particularly mothers and their wild families. I remember sighing with relief when my daughter shared that… and then she elaborated that it fascinates them that their mom writes “murder books.” I’m sure I’ll someday be paying for their therapy over it.

Pamela Crane is a professional juggler. Not one who can toss flaming torches in the air, but a juggler of four kids, a writing addiction, a horse rescuer, and a book editor by trade. Her USA Today best-selling Mental Mommy books unravel flawed women—some she knows, some she creates—and they aren’t always pretty. In fact, her characters are rarely pretty, which makes them interesting…and perfect for doing crazy things worth writing about. When she’s not cleaning horse stalls or changing diapers, she’s psychoanalyzing others.