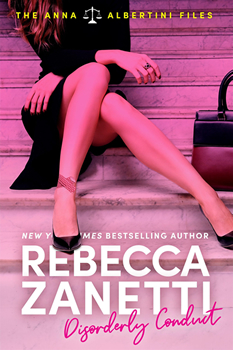 Rebecca Zanetti’s DISORDERLY CONDUCT is the first in the Anna Albertini Files. This romantic suspense novel skillfully intertwines a unique contemporary plot with humor, intrigue, and of course a couple of bad boys you’ll want to get to know better.

The protagonist, Anna Albertini, is a new prosecutor forced out of her comfort zone. When she comes face to face with the gorgeous hunk who saved her life when they were kids, she feels an allegiance to help him—but this runs counter to her job description. She’s the prosecuting attorney for his case and it seems too cut and dried.

Though a bit more educated, Anna is a strong female character reminiscent of Stephanie Plum: she periodically finds herself in awkward, humorous, and dangerous situations, but still finishes the job she set out to do. Anna’s sidekick is refreshingly original and demonstrates we shouldn’t judge others by what we see but instead, appreciate the talents they have that are not readily apparent.

Zanetti has obtained her skill at developing interesting multifaceted characters and situations through years of experience which has resulted in more than 50 romantic suspense and dark paranormal romances, many of which have landed her on bestselling lists and garnered awards.

This exclusive interview with The Big Thrill provides insight into Zanetti and her writing.

Did the inspiration for The Anna Albertini Files come from your own experiences as a lawyer, or somewhere else?

You know, the inspiration really came from a small mining town in Idaho that was settled by the Italians and the Irish. My family and my husband’s family both settled there, and I tried to figure out how a main character for a series would be from the small town.  She became a lawyer, which is handy because I have practiced law in Idaho and know the ropes somewhat. I usually write romances with a heavy dose of suspense, so throwing in those elements plus a lot of humor was exciting for me to try.

Did you learn most of what you know about gangs from watching “Sons of Anarchy” like your character, or did you have to research beyond the show?

I’m a little embarrassed to admit that I haven’t watched Sons of Anarchy.  I keep meaning to stream it, because that Charlie is a hottie, but I haven’t had time yet. I do have a cousin in a motorcycle club, and I’ve asked him questions about everything, which was helpful.  But in DISORDERLY CONDUCT, the motorcycle club was a small part of a character’s life, so I really didn’t need too much detail.

Which POV do you prefer to write in and why?

I usually prefer to write in third person POV because it’s fun to get into everyone’s heads at one point of the story or another. Writing in first person was a nice adventure, though. It’s good to shake things up once in a while.

I suspect you have ties to the Italian culture and could draw on that for your character. What about the other side of your protagonist’s heritage—did you do extensive research?

Well, my husband is Italian and I’m Irish, so it was pretty easy to do this research.  We have tons of relatives and friends from both cultures as well as experiences of our own, so this was actually a lot of fun to incorporate.

I read all of the Nancy Drew books by the second grade and then started on the Trixie Belden mysteries, and kept on reading after that.  My first romance was one of the Nora Roberts McGregor books, and I had no idea there was kissing in books until that point! Then I was hooked on romantic suspense, and even my paranormal romances have quite a bit of suspense in them. I still read Nora and really enjoy Kristen Ashley, Lexi Blake, Steve Berry, Dean Koontz, Kristen Proby, Shelly Laurenston, J. R. Ward, Walter Mosley, M. J. Rose, Christine Feehan, Beverly Jenkins…and I could keep going on forever.

With more than 50 books to your credit, what do you think is the most important attribute an aspiring author should have?

There are so many attributes to name for a writer, and I’d probably choose a different one depending on the day.  If I have just one, I’d say commitment, because if you don’t commit to sit down in the chair and write, it’s never going to happen.

Could you share something you did in the “name of research” where the knowledge you gained from the experience surprised you?

Well, I rode around in the trunk of an old Chevy to get the feel of it, and it surprised me that my sister, who willingly drove me around, decided to go across town to get a latte at Starbucks and not just through my neighborhood. It was an old car, and there wasn’t a way to get out of the trunk like you can in the newer cars. I was also surprised how easily it is to get jostled around and how high your body flies in the trunk when the car drives over bumps and railroad tracks.

How do you develop your male characters? Write sketches, find pictures in magazines/online that embody your vision, or something else?

This is a fun question, and the male characters pretty much develop on the page. I do find pictures online or in magazines that I post to a “series board,” and sometimes I return to it for basic descriptions. Sometimes my husband will say or do something, and that will end up in a book. But don’t tell him that.

What would you like our readers to know about you or your writing journey that no one has ever asked before?

I’ve never had a reader ask if we appreciate fan letters, and I have to say we really do.  Sometimes writing is a pain, and the words won’t come, and it’s so nice to receive an email of encouragement from somebody who has enjoyed past books.  I appreciate those letters so much!

New York Times and USA Today bestselling author Rebecca Zanetti has published more than fifty romantic-suspense and dark paranormal novels, which have been translated into several languages, with millions of copies sold worldwide. Her books have received Publisher’s Weekly starred reviews, won RT Reviewer Choice awards, have been featured in Entertainment Weekly, Woman’s World and Women’s Day Magazines, have been included in Amazon best books of the year, and have been favorably reviewed in both the Washington Post and the New York Times Book Reviews. Rebecca has ridden in a locked Chevy trunk, has asked the unfortunate UPS guy to release her from a set of handcuffs, and has discovered the best silver mine shafts in which to bury a body…all in the name of research. Honest.