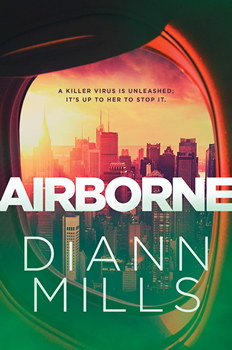 AIRBORNE, DiAnn Mills’ latest thriller, opens with Houston FBI agent Heather Lawrence flying to Salzburg. But we soon learn that her long-awaited vacation wasn’t supposed to go like this. Just hours into the long-haul, transatlantic flight, passengers begin exhibiting dreadful symptoms of an unknown infection. Dozens of them fall ill.

Written well before the Covid-19 outbreak, AIRBORNE honors medical professionals and the value of research into, and cure of, viruses.

“We live in a dangerous and unpredictable world,” says Mills. “I want to show brave men and women in law enforcement and the FBI who risk their lives to keep us safe. And along the way, they find love.”

Heather Lawrence, the book’s protagonist, fears she’s witnessing what might be a deliberately released contagion. From her quarantine with other survivors, Heather works with her FBI colleagues to identify the culprit.

Dr. Chad Lawrence, an expert in his field, emerges as the prime suspect. He is also Heather’s estranged husband. The Lawrences’ marriage has been on the rocks since Chad moved out, announcing that his career took precedence over his wife and future family.

As more victims fall prey days after the initial outbreak, time’s running out to hunt down the killer, who may be closer to the victims than anyone ever expected.

Dynamic and participative, Mills does not inhabit a professional cocoon but outreaches, leads and mentors. She speaks to various groups and teaches writing workshops around the country.

While writing AIRBORNE, she rediscovered the dedication and heroism of medical, scientific and law enforcement first responders — “unusual alliances that make little sense at the time… converge in AIRBORNE.”

AIRBORNE is the fruit of deep and extended research into its scientific, medical, law enforcement, airline, and psychological components.

Mills believes her “readers should expect an adventure” and “weaves memorable characters with unpredictable plots to create action-packed, suspense-filled novels.”

She doesn’t write to an outline; instead she lets “the characters and story lead the way! I’m an organic writer. An outline spoils the adventure for me.”

Unsurprisingly, her thrillers are built up around a classic moral order of good and evil. In her writing, “evil crops up all the way through until the climax. Does evil ever win? Yes, until the end. Evil has to look smarter and more powerful and be viewed as the ‘winner’ for the story to be worth the read. Good overcomes evil. The evil in any thriller moves forward until it’s stopped,” she says.

She defines Christian Fiction as “a story in which one or more characters solve their problems and respond to life from a Christian worldview. It’s not preachy but a part of the character.”

Mills started writing stories from an early age, but, “continued to trash my writings until 1996 when my husband challenged me to stop saying I’ll one day write a book, but to do it. He requested I quit my job and gave me one year to get anything published. During that year, I wrote a book and published a short story. I sold my book and it released in 1998. Selling and publishing my work gave me the confidence to continue my dream.”

And to the obvious appreciation of her personal and professional entourage, she says, “I’m an early riser, and I’m disciplined. I know that sounds terrible. … (but) that way family, friends, and life’s interruptions don’t send me into a tailspin.”

She is not fussy about where to write, although her favorite place is not her office but “the patio with the sights and sounds of nature.”

Hardly surprising, then, that this self-proclaimed coffee snob who roasts her own beans also enjoys cooking, baking, gardening, reading, and time with family and friends.

DiAnn Mills is a bestselling author who believes her readers should expect an adventure. She weaves memorable characters with unpredictable plots to create action-packed, suspense-filled novels. DiAnn believes every breath of life is someone’s story, so why not capture those moments and create a thrilling adventure?

Her titles have appeared on the CBA and ECPA bestseller lists; won two Christy Awards; and been finalists for the RITA, Daphne Du Maurier, Inspirational Readers’ Choice, and Carol award contests.

DiAnn is a founding board member of the American Christian Fiction Writers, a member of Advanced Writers and Speakers Association, Mystery Writers of America, Sisters in Crime, and International Thriller Writers. She is the director of the Blue Ridge Mountains Christian Writers Conference and Mountainside Retreats: Marketing, Nonfiction, Novelists, and Speakers with social media specialist Edie Melson. DiAnn continues her passion of helping other writers be successful. She speaks to various groups and teaches writing workshops around the country.

The Ninja's Blade by Tori Eldridge