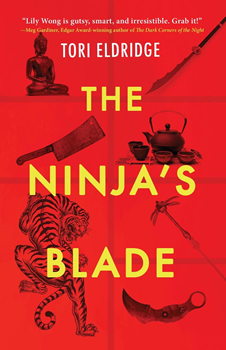 Author Tori Eldridge follows up her successful series-starter The Ninja Daughter with this year’s THE NINJA’S BLADE. A month has passed for Lily Wong before life deals her a combo that includes a missing girl, a visit from her grandparents, and the self-questioning of her choices.  This time, the ninja may be juggling more problems than she can handle.

“Lily has suffered from sleepless nights and gruesome flashbacks,” Eldridge says. “One of these violent memories hits her at the beginning of book two as she’s riding her signature racing bike into what becomes an exciting rescue.”

The topic of sex trafficking appeared in the previous book, and Eldridge knew she wanted to delve deeper into the gritty and heartbreaking reality of commercial sexual exploitation, especially of young people.

“During months researching interviews, documentaries, articles, and news reports, I was moved by the plight of teenagers who were lured, coerced, or kidnapped into prostitution,” she says. “I learned about ‘Children of the Night,’ a privately funded organization dedicated to rescuing children and young people from commercial sexual exploitation and the heroic work of Dr. Lois Lee. My characters emerged from them—hardened, poignant, endearing, heroic. As Lily sinks deeper into their lives, she realizes that all children are vulnerable. If conditions of her own life had been different, perhaps she would have been, too.”

Even though the book is a close follow-up to the previous novel, Eldridge wrote it with enough independence to not confuse a new reader. However, she says, “It’s easy to fall into Lily’s dangerous vocation and bicultural family. Yet, there’s also enough to please the returning fans.”

Eldridge promises that “You’ll meet her well-meaning employers from the women’s shelter, her beloved Baba, and her meddlesome grandparents, who fly in from Hong Kong to celebrate her mother’s 50th birthday. And, of course, there’s the romantic question of Daniel Kwok. All of this is self-contained in this action-packed thriller.” 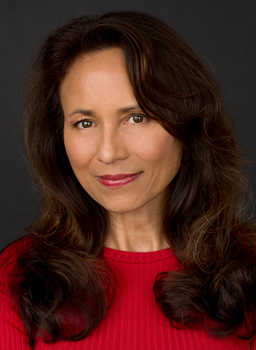 While THE NINJA’S BLADE is technically a thriller, Eldridge touches on important subjects such as harboring prejudices and making assumptions.

“When discussing racial bias and inequality,” she says, “I feel it’s important to take an honest—and repeated—look at ourselves. Prejudice presents in overt and subtle ways. Since it changes as we forge new relationships and broaden our experience, we need to check in with ourselves to clear out old beliefs that no longer fit with our current aspirations. What better way to encourage self-introspection than to have an empowering biracial champion of justice like Lily Wong question herself?”

While on the theme of champions, a book with the word “ninja” in the title is bound to include plenty of action sequences. Eldridge doesn’t disappoint, using her real-life experiences to write what she knows.

“I love writing fight scenes,” she says. “Like my protagonist, I’ve trained extensively in the ninja arts, Wushu staff and spear, kickboxing, karate, and ground fighting. All of this experience comes to play with Lily. It’s a great joy for me to bust through the sensational ninja stereotype and share authentic ninja training.”

Besides excelling at martial arts and being an author, Eldridge has had other careers—actress, dancer, singer—which all rely on self-discipline and a strong technical foundation. And all of them permeate her writing.

“Creative freedom only came after I developed a solid base of skill and structure,” she explains. “When I was performing, I landed those auditions because the technical aspects were so ingrained in me that I could devote my full attention to the expression of emotion and capturing the style of the scene, song, or choreography. The same is true for writing. A solid foundation in craft allows me to create freely.”

The author’s Chinese-Norwegian heritage also plays an important role in her stories as she explores family dynamics and interweaves them with twisty mysteries and thrilling action.

“What I love about writing the Lily Wong series is that I can blend mystery, adventure, culture, and family into one exciting, fast-paced book,” she says.

Eldridge is currently working on the third Lily Wong book, The Ninja Betrayed, which takes Lily and her mother to Hong Kong during the height of the 2019 pro-democracy protests.

“While she protects the activist daughter of her grandfather’s driver,” she says, “Lily also shields her mother from betrayal and a devious corporate attack. Needless to say, it’s not a relaxing vacation!”

Tori Eldridge is the Anthony and Lefty Awards-nominated author of The Ninja Daughter, which was named one of the “Best Mystery Books of the Year” by The South Florida Sun Sentinel and awarded 2019 Thriller Book of the Year by Authors on the Air Global Radio Network. Her short stories appear in several anthologies, and her screenplay “The Gift” earned a semifinalist spot in the prestigious Academy Nicholl Fellowship.

Before writing, Tori performed as an actress, singer, dancer on Broadway, television, and film. She is of Hawaiian, Chinese, and Norwegian descent and was born and raised in Honolulu, where she graduated from Punahou School with classmate Barack Obama. Tori holds a fifth-degree black belt in To-Shin Do ninjutsu and has traveled the USA teaching seminars on the ninja arts, weapons, and women’s self-protection. Her second book in the Lily Wong series, THE NINJA’S BLADE, releases September 1, 2020.