Freewheeling on to the Next Thing 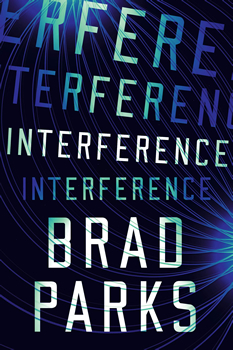 A woman with hearing loss tries to navigate the mysterious disappearance of her husband, a brilliant scientist. An ex-cop on the verge of suicide discovers a newfound sense of purpose. A billionaire tech founder will stop at nothing in pursuit of a groundbreaking technology.

These could easily be the elements of a new thriller by Blake Crouch or Michael Crichton, but it’s a welcome surprise to discover this is the premise of INTERFERENCE, a riveting new novel by Brad Parks.  Parks is a former newspaper reporter who made a name for himself writing a series about, well, a former newspaper reporter and more recently, with a series of high-concept standalones. In some ways, this book feels right in Parks’s wheelhouse—members of a family are threatened by forces beyond their control in a story that moves at a breakneck pace—and in other ways, it’s a sign of a real shift.

For Parks himself, the novel is the latest step in an evolution, as he moves further away from being a reporter and embraces his role as a novelist. “It starts with me having been a journalist where I am allowed to make up absolutely nothing,” he says. “And to finally giving myself permission to be freer and more creative, and to explore things that never could happen in the real world.”

Technically, INTERFERENCE has some things that couldn’t happen in the real world … at least not yet. Despite its escapist feel, the novel is grounded in actual science, building on a phenomenon known as entanglement.

The concept is strangely simple: when particles are entangled, if you do something to one of them, the same thing will be experienced by the other, no matter how far apart they are. Entanglement was first speculated about by Albert Einstein, who ultimately dismissed it as “spooky action at a distance,” but it’s since been documented and proven. And that got Parks to thinking about a novel, although it would be years before the story itself would gel.

“So I had definitely known about entanglement,” he says. “I’ve kind of been a science nerd for a long time and I would often read books about quantum physics and not that I would understand them entirely, but I would always think, gee, that’s really cool. And I’d love to use that in the book someday.”

However, “someday” always seemed to be way off in the distance. “I had actually tried to start writing a ‘physics book,’ probably like three different times,” Parks says. “And then I could never make it work, because I think I kept trying to fit my book to the science. Finally I had this brainstorm of no, I have to fit the science to my book. And within about 15 minutes of that lightning strike, I kind of had the basic plot for INTERFERENCE.”

The plot goes like this: Dartmouth Professor Matt Bronik is doing groundbreaking research into the science of entanglement when he begins to have a series of debilitating seizures. His wife Brigid—a university librarian—is worried, especially when doctors can’t explain what’s causing them. One day, Brigid gets a call saying that Matt has had another seizure and been taken away by ambulance, but when she races to the hospital to check in on him, he’s not there—and they have no record of him.

Soon, Brigid realizes Matt may have been kidnapped. Was he abducted by a ruthless billionaire tech entrepreneur who tried to recruit him, or is this part of an international plot to steal his research?  As Brigid joins forces with an investigator from the state police and one of Matt’s colleagues, she soon realizes there may only be one way to save Matt: using the same cutting edge science that put him in danger in the first place.

As Brigid tries to find Matt, one of the challenges she faces is that she has a condition called otosclerosis, which has slowly caused her to lose her hearing. “I knew exactly what I wanted the character’s condition to be, and then I had to go find a disease that matched it,” Parks says. “Like I wanted her to have once been in the world of hearing, right? And then be slowly deprived of that.”

Watching Brigid try to navigate a world where almost everyone can hear but her helps build sympathy, but it’s also another way in which Parks has staked out his own terrain. “How many people with hearing loss who are librarians do you find in thrillers, right?” he wonders. “It just doesn’t happen, but that’s cool. And that’s fun I hope because it makes the character memorable and it makes the character different.”

Although Parks knew he was taking chances with this novel, he has a strategy for dealing with the fear that produces: keep writing. “I think it’s probably a bad sign if you’re writing something that doesn’t intimidate you because that intimidation is the sign that you’re stretching yourself as a writer and you’re challenging yourself as a writer,” he says. “And I think that’s the place we all need to be in. So yeah, I was scared out of my mind, but yeah, I’ve come to accept that. That it’s actually a good thing now.”

He also believes that ultimately, the audience will be willing to follow him from the world they know into one where strange and sometimes unexpected things happen. “I think readers will give you one big ask,” he says. “And then you just have to be consistent the rest of the book with what you’re asking them to believe.”

As for where Parks might go next in his fiction, even he can’t be sure. “I tell the stories I want to tell,” he says. “Then later I tell a story about why I told them. There is a long-term trend in my career toward a more freewheeling style of fiction. So this is another step there.”

Between The Lines: Karen Dionne

The Ninja's Blade by Tori Eldridge