Is There Such a Thing as Too Much Violence? 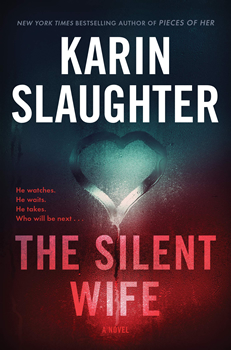 Karin Slaughter knows how to craft a character. Whether it’s the kind that stick around a while—like Will Trent and Sara Linton—or those with short or single-book lives, every novel idea begins with character.

They aren’t just the story narrators—though that’s certainly important. They actually inform every decision about how the plot unfolds, from the relationships between characters, right down to how much violence goes on the page.

Sure, Slaughter’s fans know exactly what they’re in for when they pick up one of her thrillers, but there’s nothing formulaic about them—that spine-tingling chill her stories evoke is largely organic.

“For me, the crux of the books is about the relationships between the characters,” Slaughter says. “I really try to make them integral to the plot because I write about horrific things, but I never write to titillate or exploit. I want the violence to have context, in relation to the characters. The fact is, I’m writing about crimes that actually happened and the research is based on autopsy reports and police reports. But I’m also writing about the worst day in someone’s life. So I want to honor that by grounding the story in humanity. In doing that, it’s never been hard for me to write a scene of violence.”

But is there such a thing as too much?

“I read a ton of crime novels,” Slaughter says. “That’s my go-to genre. And so I know what I can handle. I love my readers, but I never think about them when I’m writing. I assess every detail of the crimes in the stories and while something may be true, I have to determine if it’s so startling or horrific that it would pull the reader out of the story.”

In her latest novel, THE SILENT WIFE, the 10th installment in the Will Trent series, the crimes are indeed horrific. In present-day Atlanta, Georgia, a young woman is brutally attacked and left for dead—it’s an MO that seems eerily similar to a cold case from almost a decade earlier. Soon after Will Trent picks up the file, it becomes clear that in order to solve the new case, he must solve the first.

To do that, Will calls on medical examiner Sara Linton for help. Their investigation sends them on a dangerous walk down memory lane. It’s sketchy territory for Will and Sara, but for Slaughter’s long-time fans, the journey calls back into action a reader-favorite character in Jeffrey Tolliver.

“With this particular book, it was a lot of fun to write from my other series to bring Jeffrey back,” Slaughter says, noting also the novel’s alternating past and present structure. “And to write about Sara from two different points in her life.”

To keep the characters’ voices consistent, Slaughter says she started to read some of her earlier work—but after two decades and an impressive body of work that spans more than 20 books, it was simpler to read the summaries on her Wikipedia page. When she dove into the writing, though, Slaughter was surprised at the stark differences between Sara’s past and present loves—Jeffrey was more a hands-on, violent kind of cop, whereas Will is…not.

“When I was writing that series, a lot of characters being written were in response to 9/11—they had that Jack Bauer, torturing to get the information mentality,” she says. “Jeffrey was of that time. I hadn’t considered that before. And it seems to me with this resurgence of Black Lives Matter—which I wholly support—we were seeing inklings of this before, the way police were interacting with the public. Jeffrey is a good guy. He’s well meaning. He wants to serve the community and protect, but what if he’s wrong?”

While it’s true that Will is softer, less hands-on than Jeffrey, that doesn’t mean Slaughter lets him entirely off the hook. He’s forced to face the kinds of horrific crimes police officers—and society as a whole—are dealing with every day.

“I want to write unflinchingly about crime—I wasn’t seeing that as a reader,” she says. “There was always a softening of the language, especially in crimes against women. The important thing to me is to honor the story.”

The novels go to a dark place for sure, but Slaughter admits writing about that darkness is cathartic, an escape from reality—which at present, is a pretty dark place. Slaughter, who is immunocompromised, says although her daily routine hasn’t changed much—“my life is quarantine”—the pandemic has put a few kinks in her plans. Obviously the tour for THE SILENT WIFE, a portion of which was to take place in Europe, is on hold, and she’s spending a lot more time on Zoom, connecting with readers, writing pals, and family.

In between, she’s writing—which she encourages her peers to keep doing as well.

“Tell your story,” she says. “Everyone’s is different, and that’s okay. Just don’t stop writing. Our readers will be there.”