She Didn’t Just Want to Be Her, She Was Her 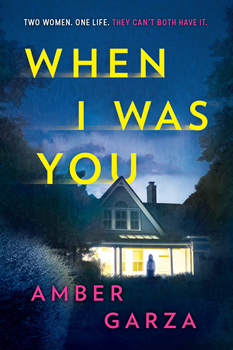 “I’m calling to remind you of your well baby appointment this Friday at 10.”

Lonely empty-nester Kelly Medina gets the call that sets obsession in motion in author Amber Garza’s riveting psychological thriller WHEN I WAS YOU.

Kelly hasn’t had a baby at home for 19 years—her son Aaron left for college last year—so the call from Aaron’s pediatrician’s office has her stunned. It seems there is another Kelly Medina living in Folsom, California.

Kelly feels like she’s no longer needed, at least not the way her son needed her when he was a child. And her husband, Rafael, works and lives most weeks in another town, only coming home for the occasional weekend visit. She is lost.

As Kelly finds out more about the “other Kelly” and her infant son Sullivan, she is compelled to not only meet them, but insert herself into their lives. Maybe she and the other Kelly can become friends. Maybe she can help her with Sullivan. Maybe the girl and her baby can become a second family for her.

“I’d been worried that I was being obsessive, stalker-ish, unhealthy, or whatever other words my therapists had used about me in the past. But it wasn’t like that. You were the one who’d come to me. Not the other way around. You went to my same gym. Took your child to my same pediatrician. Moved to my town. It was you who had inserted yourself into my life. I was simply curious.” 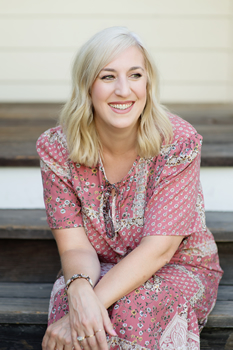 Kelly’s new mission is to incorporate the “adult child” Kelly and Sullivan into her life and care for them. The other Kelly is so young. She doesn’t seem to grasp what motherhood is all about. As an experienced mom, Kelly is duty-bound to teach her.

Kelly’s interest soon spirals into an addiction—she must take care of the baby.

But the tables quickly turn. And what Kelly doesn’t know about the girl-child and her baby might just get her killed.

Written in second person, the story is eerily intimate, making readers feel as if they’re part of the dialogue, tip-toeing around at night, peering into windows, spying with a rationalized purpose. And sometimes, we’re not sure who “you” in the dialogue really is.

Who wins the life of Kelly Medina in the end? You’ll have to read to the last pages to find out.

Amber Garza talks with The Big Thrill about the inspiration for her novel—discovering another Amber Garza in her small town—and how curiosity can spiral into obsession.

Did you find out about the other Amber Garza living in Folsom before you wrote WHEN I WAS YOU or after? 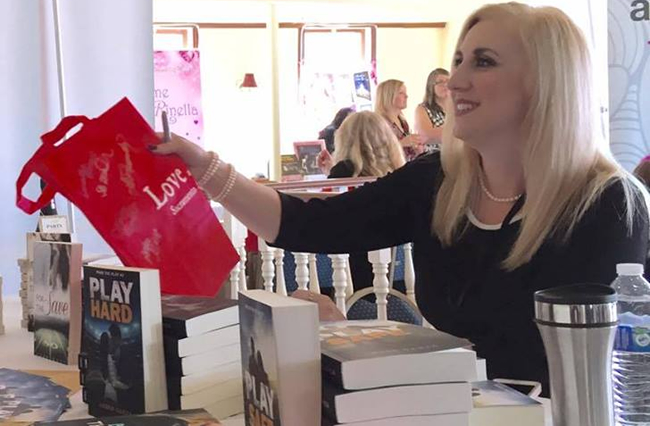 Garza signs books at a Love and Fifty event in Sacramento.

Before. That’s what gave me the idea for WHEN I WAS YOU. I’ve known about the other Amber Garza for over 10 years now. I first found out about her when I checked in at my local gym. They’d always ask for my birthdate so they could distinguish between the two of us in the system. And around that same time, I found out another Amber Garza was a patient at my doctor’s office. This has continued to happen at many places sporadically over the years. I’ve even had people tell me we look similar. However, we’ve never met, so I can’t say that with certainty.

What inspired you to write about an obsession to steal someone’s life?

I live in suburbia, and there’s so much comparison going on here. It’s that whole “keep up with the Joneses” thing, you know? And as much as I try to stay away from it, it’s so easy to get caught in that trap. After finding out about the other Amber Garza, I thought about combining these two ideas. What if two women with the same name met and wanted each other’s lives? And from that question, this novel was born.

Explain more about the arguments stalkers use to justify their actions. When does interest move from curiosity—or a willingness to get to know someone better—to obsession? 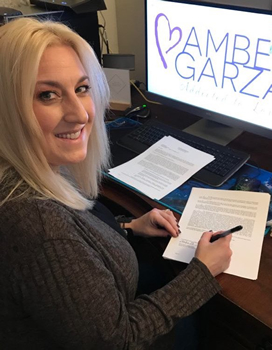 Garza signs her contract with the Gernert Company.

In these answers, I’ll refer to the older Kelly as Kelly (1) and the younger as Kelly (2).

Kelly (1) justified her actions toward Kelly (2) by telling herself that she was helping Kelly (2), and, more importantly, Kelly (2)’s son Sullivan.

For Kelly (1), curiosity caused her to show up at the pediatrician’s office to check out Kelly (2). I feel like she may not have been at the full-blown obsession phase when she steps out of her car and approaches Kelly (2), but she’s definitely leaning into it. She’s way too desperate already to let Kelly (2) go without a conversation. A bud of obsession takes root during that initial conversation and continues to grow the more they hang out.

How does emotional trauma affect our perspectives? How do people use their experiences to justify their actions?

We are all a product of our experiences—good and bad. They shape us into who we are. But often, we allow our trauma and pain to be our strongest motivators. We have an innate desire to protect ourselves and to seek vengeance. In Kelly (1)’s case, we see that her own trauma drives all of her decision-making until the very last page.

Did you encounter challenges as you went from writing romances to writing a thriller?

There is a formulaic aspect to writing romance that is familiar and allows me to write more quickly. But there was freedom to writing WHEN I WAS YOU I truly enjoyed. The biggest challenge I’ve faced with writing a thriller is making sure I’m adding in enough red herrings and clues to keep the mystery element of the plot moving forward at all times. 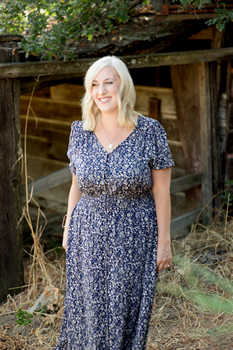 What advice can you give other writers, especially those who would like to move from one genre to another?

The best advice I can give is to read a lot of the genre you want to write. Also, to read the authors who dominate that genre. The thriller genre has always been my favorite, so when I decided to write one, it came more easily than I thought it would. And I believe it’s because of all the great thrillers I’ve read.

Aside from writing, my other love is music. When I’m not sitting at my computer, I’m often leading worship at church, or making music with friends or my amazingly talented son.