A Past That Haunts You 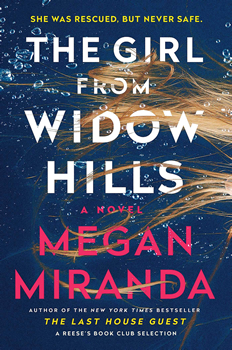 There are all kinds of clichés and sayings about living in the past.

“People who are living in the past generally are afraid to compete in the present.”

“There is nothing you can do about the past except keep it there.”

“Your past can’t hurt you anymore—unless you let it.”

In Megan Miranda’s chilling new novel, THE GIRL FROM WIDOW HILLS, Arden Maynor has gone to great lengths to try and heed this advice. In her hometown, she’s best known as the young girl who, while sleepwalking, was swept away during a terrible rainstorm and found four days later clinging to a storm drain.

Everyone knows the story, knows Arden—and almost 20 years later, the only way Arden thinks she can leave her past in the rearview is by changing her name, packing up her belongings, and moving hundreds of miles from Widow Hills.

Arden—or Olivia as she is now known—ends up in a small town, living in an isolated, picturesque home near the woods. There, she manages to stay off the media’s radar…

Until one night she jolts awake in her yard to find the body of a man she knew from her previous life. She’s terrified because now not only is she sleepwalking again, but her past is hurtling toward her. The girl from Widow Hills is about to be the center of attention again—and this time, Olivia may have nowhere to run.

In this exclusive The Big Thrill interview, Miranda talks about the terrors of sleepwalking, the themes that drive her novels, and whether anyone really can outrun the past.

Arden—or rather, Olivia—is literally running from her previous life. What fascinates you about this theme?

I’ve always been interested in how the past influences the present. You can become someone entirely new, but people who know you in a certain way aren’t always able to move past their perspective. In thrillers, the past often does come back in some way—and in this book, in a very literal way.

This probably dates me, but I couldn’t help but think of that story from the ’80s—Baby Jessica who fell in the well. It’s been 30 years, but I did a Google search and there were all kinds of articles about who she is now, how she’s doing. How did that story—or others like it—inspire THE GIRL FROM WIDOW HILLS?

There were a few inspiration points and that was definitely one of them. Years ago, I was watching the news, and I heard a snippet about Baby Jessica—I think she was getting married, or it was the anniversary of the event or something. Just hearing her name, even decades later, you could remember the event. And then a few summers ago, there was the story about those young soccer players who were trapped in a cave. I get goosebumps when I think about the moment they were found alive. It got me thinking about why those stories resonate with people, and I think it’s because these are huge events that could happen to anyone.

I loved how well you demonstrated the discomfort that can go along with being in the middle of a media firestorm. The book is set in the year 2000, so social media was still gaining traction, but how do you think Baby Jessica or Olivia’s experiences would be impacted now in the age of instant information?

As a child sleepwalker, your depiction of the terror sleepwalking can induce felt so authentic. Have you had personal experiences with sleepwalking?

Not personally, but when I started writing the book, I had a number of people willing to share their experiences. One of the common themes was that there was always an underlying fear that it would happen again. Olivia lives alone, and so she tries to do all these things to protect herself from it happening again. I also did a lot of research, not just on sleepwalking, but on how we interact with sleep and the impact it has on our lives.

I know that setting is important to you and that you’re drawn to small towns. Do you prefer fictional settings or towns that are based on actual places?

Oh, I always make up locations because I love small-town settings and I don’t want to take someone’s town and make it creepy.

No question THE GIRL FROM WIDOW HILLS is creepy. The Big Thrill is a magazine for thriller readers, but it’s also for aspiring thriller writers. What advice would you give on how to ramp up suspense?

Tension doesn’t always come from an external plot. There are many types of tension—relationship dynamics, setting, character motives. I think the most important thing is to always filter everything through the character’s emotions. In the beginning of the book, the house in the woods is a source of comfort and safety for Olivia. She likes being alone. But then when things start turning for her, everything is filtered through distrust and fear. When a character is afraid, they view the world in a different way.

I’m just nearing the end of a first draft of a new book and I don’t want to say too much about it because my drafts change so much. I don’t do a lot of advance plotting, so there’s always some rewriting. But what I can share is that there are two women at the heart of the story, and it features a very close-knit neighborhood where a crime occurs.