This month’s guest voice performer may be relatively new to audiobooks, but in just a few years his work has already won several AudioFile Earphones Awards and the 2020 Audie Award for Best Thriller/Suspense.

If he sounds familiar, it’s because he’s the voice behind Frozen’s Prince Hans. Santino Fontana brings his impressive stage and film talents to the listener’s earbuds and seems equally at home with fiction and nonfiction. Fontana goes beyond characterization, giving each individual a unique voice. He digs deeper to signal temperament, feelings, and maturation, giving each character extra dimensions.

With the following five questions, you’ll discover more about Santino Fontana, both as a voice performer and as an actor.

I wish everyone who listened to audiobooks knew this too, and it’s not true in every case, but the producer/director and engineer of an audiobook have a huge impact on how an audiobook turns out. Reading an 18-hour book can be overwhelming for the narrator. With the guidance and help of someone else listening, they’re able to identify what was missed and what may be better. As an actor, I always think of myself as a generator of creative ideas. I want a collaborator to help choose which option is best, and there may be some back and forth, but when you’re in the middle of a giant book, you don’t have perspective like they do. I’d say nine times out of 10, I trust the people on the other side of the glass. There are a couple times I wish I’d gone with my gut, but the fact that it’s not totally on you is something I wish I’d known before I started, and something I think listeners don’t really know about.

I have an 8½-month-old who’s crawling all over the place. If I’m not working, I’m usually chasing her.

What’s your first reaction when someone asks you how they can become an audiobook narrator?

I get asked occasionally how I got into voice-over stuff in general, and I tell them my experience, which I first recognize as lucky. As a theater actor in New York, my gig when I wasn’t acting was to be a reader for auditions—which basically means you play all the other parts in a scene opposite the actor auditioning. That was a great way to learn not only about auditioning but about New York theater at that time because I saw EVERYTHING. I got to play all these different parts in a scene. That would lead to reading stage directions in the readings of new plays, which I was thrilled to be asked to do just to get into the room. And, like clockwork, people would come up to me and say, “So you must do a lot of voice-over work,” and I would constantly tell them, “No! No, I DON’T! How do I do that? I want to go to there!” I was told it’s such a small group of people who get to do it. Later I was introduced to my voice-over (VO) agent, Steven Arcieri, who essentially put me through VO training to better understand it. I auditioned, and I’m not exaggerating here, probably five or six times a week for three years and was never hired. At the end of those three years, I basically came to Steven and said, “Look, I really appreciate how supportive you’ve been, but it’s just not looking like this is in the cards for me.” And he said, “No. Trust me. Once you book the first one, it’ll change.” And I think a week later I booked my first VO gig, which led to commercials, promos, and finally audiobooks. It takes time and tons of at-bats, and a willingness to just keep at it.

When reading for pleasure do you find yourself creating voices and thinking about pacing and emphasis?

What is reading for pleasure? Please explain that to my child.

What kind of things do you do to protect your voice in your downtime?

I was doing an eight-shows-a-week Broadway show while I was recording The Institute, and I had to be super careful. Luckily, I was able to limit the recording time in the booth, and Christina, the producer/director, was incredibly understanding and helpful, making sure I wasn’t going to hurt myself. Vocal use is all about preventing the snowball; once something gets out of balance, it gets worse unless you nip it in the bud and take care of it.

AudioFile recommends five thrillers to extend your summer listening. Plug in and enjoy! 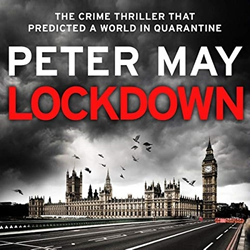 This prescient thriller was written in 2005 but turned down by publishers, who thought the story about a global pandemic that forces London into quarantine was “ludicrous.” The Scottish author’s frequent collaborator, Peter Forbes, narrates this chilling story with an edginess that perfectly mirrors the action. Centered on DI Jack MacNeil’s efforts to track down the murderer of a young Asian child whose bones have been dumped at a construction site, the plot mushrooms into a search for the source of a virus that threatens millions. 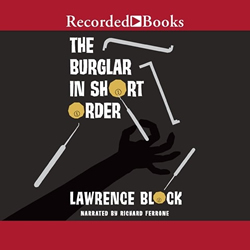 THE BURGLAR IN SHORT ORDER

This collection focuses on Bernie’s origins—for example, how he acquired his name, his cat, and his bookstore. Throughout nine novels, narrator Richard Ferrone’s resonant voice and erudite delivery have reflected the character of burglar Bernie Rhodenbarr, a witty, ethical thief. Now, Ferrone is back to do the honors narrating this compilation of stories, almost all of which have appeared in print or audio. (Some entries are chapters pulled from Rhodenbarr novels.) Included is an essay by Grand Master Block explaining how Bernie developed and offering insights into the cozy vs. noir debate. 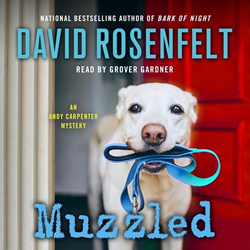 Narrator Grover Gardner returns to breathe life into listeners’ favorite dog-loving lawyer as Andy Carpenter defends a man declared dead in a boat explosion. Gardner makes listeners root for Andy as he becomes embroiled in the case when the supposedly dead man retrieves his beloved companion from Andy’s dog-rescue charity. After the police charge the man with murdering his fellow passengers, listeners fall in love with Andy for his need to defend the man for the dog’s sake. Gardner gives each supporting character a distinctive flair. In his vivid portrayal of the wisecracking Andy, Gardner creates a sense of a cheerful reunion with the lawyer for longtime listeners and a warm greeting for newcomers. 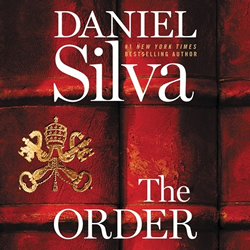 Through a mystery reminiscent of The Da Vinci Code, listeners are taken into the world of Catholicism and its historic relation to Jews. Narrator George Guidall brings back the key characters in Silva’s Gabriel Allon series. Through tone and accent, Guidall differentiates the many characters—some regulars, some new, some good, some quite devious—all of whom move the story along at a steady pace. Guidall proves his mastery of narration with two challenges: First, he keeps listeners engaged throughout the lengthy passages of ancient history; second, he voices Allon’s young children without sounding too childlike. The Silva-Guidall partnership delivers an intelligent thriller that will keep listeners glued to their earbuds. 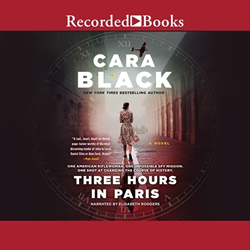 Cara Black gives listeners her first standalone novel, which takes place in a 36-hour period in 1940s Paris. The three hours in the title refer to a mysterious visit that Hitler made to Paris in June 1940. Narrator Elisabeth Rodgers rises to the challenge of performing with American, English, Scottish, French, and German accents. Kate Rees, a feisty American sharpshooter, is recruited by British intelligence to parachute into Paris to assassinate Hitler in that time window. Rodgers beautifully pronounces French phrases and also creates differentiated voices for the German officers who are on the hunt for the assassin. An intense listen from the first scene to the last.