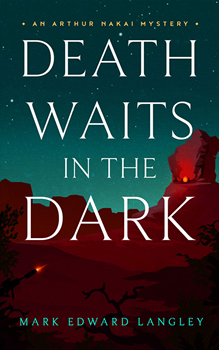 Mark Langley is living the dream—which was to become a writer. And DEATH WAITS IN THE DARK, the second in his Arthur Nakai detective series, is the latest installment of that dream.

Let’s begin by getting the personal stuff out of the way. Langley, an only child, was born in Richmond, Virginia and grew up outside Chicago. His father worked for a major corporation and his mother “was the traditional wife—in a sense—but was smart as a tack and ran the household.” As a child, Langley was a mixture of extrovert/introvert/fun-loving. He describes himself as “a rambunctious child that pretty much did my own thing.” He skipped college because he didn’t see himself doing anything but what he wanted to do. Ironically, he wound up having a job that required a suit and tie. “That just wasn’t me, but it took me years to figure out what I wanted to do.”

Which leads us right into what he has done with the rest of his life.

When was it that you first got interested in writing?

I read a lot as a kid. For instance, after seeing the film Patton with George C. Scott, I picked up a copy of Patton: Ordeal and Triumph, because I wanted to read about the man.  Later, when I went to work at B. Dalton Booksellers in Houston, I discovered Robert B. Parker, Mickey Spillane, John D MacDonald, and Tony Hillerman. I was in my 20s by then and had no idea I was learning from the masters as I was reading them.

What was your ambition as a kid?

I guess, like a lot of boys, I wanted to be a NASCAR driver. But since that didn’t seem to be in the cards, my next choices were to be a Hollywood stuntman or director. Neither of those hands were dealt me, so I fell into auto mechanics, working most of my 35 years in the automotive aftermarket. I started out behind the counter at an auto parts store and ended years later as division head of a local company, still hammering away at my laptop, searching for that big break I thought would never come.

When did you start writing?

Judging by the things my mother kept from my childhood, I’d say I was about five. I wrote a one-page story titled, “The Devil Car!” in which there was absolutely no mention of the devil. I took a creative writing class at a local college, but never went any further. I never joined any writer’s groups. In fact, I never knew there were such things back then. I learned character from Hemingway, dialogue from Parker, action from Spillane, and description from Hillerman.

Why did you choose to set your series in the Southwest?

I fell in love with that land when I was 12. It spoke to me, it reached itself inside my soul and became a part of me. In my 20s I returned, and something just filled my heart about being out there. The Native way I discovered back then in my 20s brought me a new kind of peace.

When I returned to the Four Corners area again, the red rock and the hi-lo country told me I was home. I took a two-week trip and drove from Indiana to Glacier National Park, down through Wyoming, Colorado, and into New Mexico. I dictated everything I saw and felt into a Panasonic tape recorder. I’ve driven the hard-packed roads of the reservation and seen the people. Ninety-eight percent of the locations in my novels actually exist. The other two percent are fictional.

When I got home, I  transcribed everything and began to develop characters with backstories and outlined my first novel Path of the Dead, which took me 20 years to write.

I was extremely lucky to meet with three Native people while out there doing research for DEATH WAITS IN THE DARK. I consider them my friends and look forward to seeing them again. I also have made several Navajo friends on social media and they all like that I am writing about things that affect them on a daily basis. In DEATH WAITS IN THE DARK there’s the struggle with PTSD, drilling, and fracking in the vast San Juan basin, and the racism they still face from whites (Bilagáana) and other people.

Tell us about your journey to becoming a published author.

They say “life is what happens while you’re busy making plans” and it couldn’t be truer. I had been sending out chapters of Path for a long time and getting rejections at every turn. Then, once I finally “found my voice” as they say, everything fell into place. I lucked into finding an online listing site of every agent in the country. I began sending out queries and sample chapters—whatever their guidelines dictated. After I retired at 56, I spent January thru March 2017 sending out letters of query and sample chapters. I received 15 rejections before Richard Curtis called me. After he and I spoke, he took my completed novel and submitted it to five publishers, and within two weeks, I received a two-book deal from Blackstone Publishing. I was in absolute heaven. My dream was coming true and I couldn’t believe it.

How did you come up with the character of Arthur Nikai?

When I was creating Arthur, I knew I wanted him to have a military background, and when I read about a group of CBP officers called the Shadow Wolves, I fell in love with that concept. So Arthur is a guy who spent 10 years in the Marines, 12 years as a Shadow Wolf, all while dealing with PTSD and getting himself back into harmony through his Native teachings and way of life. Sharon, his wife, is a local news reporter, and so I contacted a reporter at a Chicago TV Chicago, and she helped me understand what you give up to have that career. As for Jake Bilagody, a Navajo policeman, I wanted a character who would be like a father figure to Arthur, while at the same time being a different kind of Navajo Nation Captain. He’s a hands-on guy that has 10 years on Arthur age-wise and will push back when he feels he has to. Together, they make a great central trio to group a story around.

Lately, there’s been a lot of controversy surrounding “appropriation.” In your series, most of your characters are Native American, and you’re not. Where do you stand on this issue?

I don’t know what’s in my heritage, but I will say this, I’m writing to tell a story of a people I respect and love. I don’t agree with all the “appropriation” talk and the divisiveness associated with it. To me it means I’m honoring a people I have a tremendous respect for. I have come across people who have reprimanded me for it, but I ask them to get to know me. I write these stories because I have something to say that is better said from these characters’ perspective. I want the reader to see them as no different from who they are. I want them to understand the racism and prejudice and generational trauma they’ve suffered in the past and still do today. I ask that no one prejudge me, but ask me questions, and let’s have a learning conversation about what I write.

I’ve spoken with other authors, and I seem to do things differently. I normally come up with a title and then create a story around it. I know that sounds weird, but it seems to work. Before I begin writing, I sit down and outline my chapters. It’s better to have a road map than to get lost along the way. Eventually, my characters take over, and I find them taking me into directions I hadn’t planned on.

I try to write every day. I seem to like to write at all hours, actually. Sometimes I’ll be up past midnight. I’m fortunate that my wife enjoys reading my work. When I finish a first draft, she’ll go through it, find all the mistakes, and sometimes figure out who the killer is before it’s revealed. And if she does, it’s back to the drawing board!

I’ve just handed in book three of the series, When Silence Screams, in which I deal with the incredible tragedy of MMIW: Missing and Murdered Indigenous Women. I want America to know that this is going on daily and why they should care. As people of this land, we are one. If we all stopped to focus on the similarities, the differences might not seem so divisive.

Mark Edward Langley was instilled with a love for the American West by his father at a young age. After revisiting it throughout adulthood, his connection to the land and its people became more irrevocable. After spending almost thirty years working for companies, he retired at the end of 2016 and began to focus on writing his first Arthur Nakai Novel. Path of the Dead, which was released August of 2018. Mark and his wife, Barbara, live in Indiana and spend their time between there and New Mexico. He is currently working on the next novel in his series, When Silence Screams.