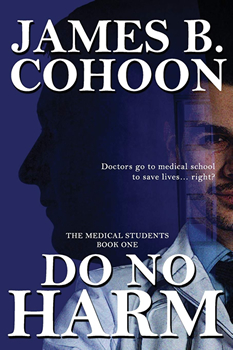 Doctors go to medical school to save lives…right?

When Matthew Preston was eight, his father was shot and killed in rarefied Pacific Palisades by Ted Nash, a home burglar who happened to be the Prestons’ neighbor. Though Nash was sentenced to life in San Quentin, Matthew’s lifelong obsession is to somehow get into the prison, gain access to Nash, and exact the ultimate personal revenge. He devises a plan to become a prison doctor to gain access to Nash.

While in medical school, Matthew falls for brilliant classmate Torrey Jamison from poverty-stricken East Palo Alto. Torrey is battling her own demons, having been raped by a school counselor while in high school. Matthew is focused on vigilantism, but he loves Torrey, who is morally opposed to killing for any reason—or so she thinks.

The Big Thrill caught up to author James B. Cohoon to ask a few questions about his just-released medical thriller, DO NO HARM:

As a retired civil litigation lawyer, I vowed to myself that I would not write a legal thriller.
But somehow, before I knew it, an ancillary legal subplot appeared. There was nothing I could do about it. 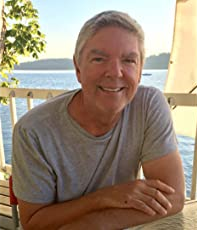 After painstaking research about medical school training, San Quentin prison, and our political institutions, I learned the following: prison doctors have either a death wish or a Mother Teresa complex (or they just want a 9-5 job with every other weekend off). And our criminal justice system is irreparably broken. So of course I decided to take a thrilling and entertaining look at these structures through the eyes of strong but flawed characters.

Often criminals are glorified while victims of violent crime are ignored. In this fictionalized story, the childhood victims grow up to be doctors. But they are still human, with the urge for revenge. And who knows to what lengths they will go to achieve it. Morality is not black and white, or even gray.

After graduating college with a biology degree, I worked in a cancer research lab in Seattle. Real science still intrigues me, and I love it when thrilling, creative plots are combined with scientific or technical principles.

James B. Cohoon was the president of a Los Angeles-based law firm until his early retirement in 2014. As a civil litigation lawyer for over 30 years, he frequently lectured and published legal articles. His work included writing legal briefs and documents for judges and other lawyers which were, in essence, ‘stories’ to fit the facts of his hundreds of legal cases. He resides in California with his high-school sweetheart, Rozanne, with whom he has two children—Kristin, a lawyer who is now a stay-at-home mother, and Travis, a doctor. His passions include sighting Orca whales, playing bridge, and mowing the lawn.