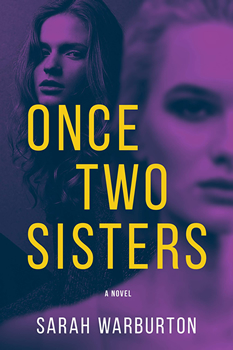 When her sister goes missing, Zoe assumes it’s just another one of her estranged sibling’s stunts—but the danger is all too real.

Zoe Hallett and her sister, Ava, are the precocious offspring of two pioneering scientists, but the sisters have been estranged for years. When Zoe reads a news story about Ava’s mysterious disappearance, she assumes it’s just another of her sister’s twisted fictions, designed to blame Zoe and destroy the peaceful life she’s created with her husband and beautiful stepdaughter in Houston. But Zoe’s email is hacked to send threatening messages to Ava—and a more sinister picture begins to emerge.

Zoe returns to her home state of Virginia to prove her innocence to the authorities, to her parents, and to Glenn, her ex-boyfriend and current brother-in-law. For the first time, Zoe begins to believe Ava is in grave danger, and when Glenn catches her searching for clues in Ava’s home, she looks guiltier than ever—but maybe Glenn is not all he seems.

The clues Zoe finds point to a bizarre link between Ava’s disappearance and her mother’s “research.” Is there a secret someone is trying to protect? And would someone be willing to kill to protect it? As her sister’s life hangs in the balance, Zoe draws on hidden reserves of strength and hope to save the sister she never thought she loved.

Author Sarah Warburton was generous enough to spend some time with The Big Thrill discussing her debut novel, which has been compared to Alafair Burke and Megan Collins, ONCE TWO SISTERS:

How fun it felt (and a little nervy) to write Zoe, the youngest sister, especially when she talked about her older sister. As the older of four sisters, I had a great time playing with that relationship. My younger sisters will be unafraid to tell me (and each other) how I’ve gotten it wrong.

The story’s about two sisters, but it’s also about negotiating relationships with ex-husbands, distant parents, and stepchildren. Something for everyone!

I’ve always loved to read and after starting out with The Westing Game and moving through Agatha Christie, I just kept going with mysteries and thrillers. I’ve studied with Pam Houston and Justin Cronin, who helped me refine my writing and whose workshops produced my two published short stories. A chance remark by Dennis Lehane at a signing inspired me to find a critique group. Some of my favorite authors include Laura Lippman, Sharon Bolton, Tana French, Ruth Ware, Kristina Ohlsson, Sara Paretsky, Tana French, Megan Miranda, Gillian Flynn, Ian Rankin, Elizabeth George, and Denise Mina. While I lived in Texas, I went to book signings at Murder by the Book and met many of the authors on that list. Their varied experiences were inspiring, and their encouraging words, especially during the long year my first (still unpublished) novel was on submission, helped me persist on the path to publication.

What features distinguish your book from others on the subject?

I didn’t want to write a story where every character is twisted and just out for herself. My estranged sisters work separately throughout the novel to overcome their own worst demons while solving the mystery and surviving. I wanted to write a thriller where the youngest sister initially thinks the oldest is pulling a “Gone Girl” style trick, but when she realizes the danger is real, she is able to overcome the wounds of the past so that the final goal isn’t just to save her sister’s life, but offers the chance at a new, reconciled relationship. After all, Ava is the only one in the world who actually experienced Zoe’s childhood, and Zoe is the only one who can really understand Ava’s past.

As the oldest of four sisters, I’ve always been fascinated with the way siblings struggle to claim their own self-identity, while also projecting and misrepresenting that of their “competition.” I wanted to write a thriller where two sisters are able to reexamine their history and the nature of their relationship because they are physically separated…so the goal of the story isn’t just a reunion, but also a reconciliation. Sometimes we need distance to come together again!

I’ve always loved mysteries, crime novels, and thrillers of every kind. I love “domestic thrillers,” because you get life-and-death stakes, but within the context of close social relationships. I wanted to write something that explored how it feels to have a difficult relationship with a sibling or parents, but with high action twists and turns.

Sarah Warburton is the oldest of four sisters, raised in Virginia, and an avid reader and knitter. She has a B.A. in Latin from the College of William and Mary, an M.A. in classics from the University of Georgia, and another from Brown. Sarah has worked at independent bookstores—Page One Books in Albuquerque and Books on the Square in Providence—and spent ten years as a writer, which led her to become lead writer and editor for UpClose Magazine. Her short story “Margaret’s Magnolia” appeared in the Southern Arts Journal, and her Pushcart Prize-nominated story “Survival English” appeared in Oyster River Pages. Now she lives with her family—husband, son, daughter, and hound dog—in the mountains of Southwestern Virginia. ONCE TWO SISTERS is her first published novel.