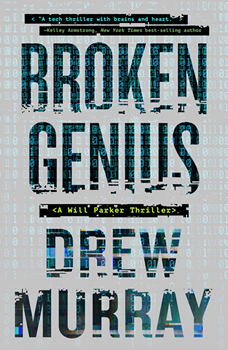 Will Parker, the protagonist of Drew Murray’s debut techno-thriller and series launch BROKEN GENIUS, is a young man poised to become a legend. Already the founder and CEO of a company valued at $1 billion, Parker is ready to close a deal that will write him into the history books alongside Bill Gates and Steve Jobs. But disaster strikes when Parker agrees to help the FBI catch a killer who’s using the young tech genius’s trademark software to livestream his murders. Parker’s technology leads the police to their target’s door, but not before a careless error on Parker’s end gives the killer the opportunity to claim one final victim.

Years later, Parker is still trying to exorcise his guilt. Having traded his CEO title for a badge and gun, he’s now a special agent with the FBI, where he puts his skills to work tracking down cyber criminals. When he’s called to the scene of a murder connected to an Indiana comic book convention, Parker becomes embroiled in a deadly plot involving the dark web, a notorious Chinese hacker, Russian criminals, and a radioactive quantum computer that must be kept out of the wrong hands at any cost.

Murray is an Ontario native with a background in corporate technology and investing. A lifelong storyteller, he has since turned his talents to education—he teaches business and creative writing courses at Western University and Fanshawe College—and, of course, writing thrillers. BROKEN GENIUS has earned praise from Publishers Weekly and Bookreporter.com, along with glowing blurbs from Charlaine Harris, Kelley Armstrong, and K. J. Howe. In this exclusive interview with The Big Thrill, Murray speculates on the future of the publishing industry and reveals the key to an effective techno-thriller.

Tell me a little about the inspiration for BROKEN GENIUS and the Will Parker series.

Ever since I could read, I’ve been excited by the possibilities science fiction promised for the future. The spellbinding stories of space travel, intelligent robots, and futures both utopian and dystopian, were all enabled by technology. When the first computer showed up in my elementary school classroom, I was hooked. I ended up working in corporate technology for over 20 years.

Will Parker came to me as part of a short story competition with a murder-at-the-beach theme. I’d just come back from visiting friends in Silicon Valley, and I wondered what kind of detective would be at home in the high-pressure, high-stakes tech industry of Northern California. There was so much more to Will than I could fit in that short story. He needed more space. When I started BROKEN GENIUS, it gave me the larger canvas I needed to blend technology, espionage, murder, and mayhem into a mystery Will could solve.

BROKEN GENIUS is your first published novel. Is it the first novel you’ve written?

Being a hands-on learner, I wrote a few novels before BROKEN GENIUS. Each was an educational experience I used to reflect upon and apply those lessons to improve in the next iteration. Because it took months to write each novel, the road to BROKEN GENIUS took longer than I expected, but I believe I’m a better writer for it.

What’s one thing about Will that you’re excited to explore over multiple series installments?

Without giving away any spoilers, Will is still learning to accept his past and how that’s changed him as a person. There’s no going back to the way things were, and he’ll have to adapt to who he is now, and who he wants to be in the future. With the events of BROKEN GENIUS, Will’s able to move forward, but he’s still only at the start of this transformation. I’m excited to explore how that goes for Will and where he ends up.

You’re an avid science fiction/fantasy fan. What led you to make your debut with a techno-thriller rather than SFF?

I do love SFF, but I’m equally a fan of a good thriller and mystery. I’ve always read very broadly. Legendary writers like Len Deighton, Jack Higgins, and Stephen King introduced me to action and suspense, while Agatha Christie’s work showed me the structure of a classic mystery. Writing a techno-thriller allowed me to explore those genres, and setting the novel at a comic-con gave me a chance to salute my favorite SFF too!

To say that technology evolves quickly is an understatement. How can writers make sure their techno-thriller is still relevant five years—or even a year—down the road?

To make a techno-thriller exciting, you need to write about future technology. Once any given technology turns into a consumer product people can hold in their hands, it becomes more challenging to turn that into a source of suspense. It’s a tricky balance, though, because if you write about technology that is too advanced, it starts to feel like science fiction. There’s this terrific space where a technology is close enough to prime time that the average reader can understand it, but it isn’t here yet, so you can play to fears of what it might do.

You teach creative writing, including a class in world-building. We usually think of world-building as belonging to the SFF world, but what are some lessons or techniques that are helpful for thriller writers as well?

Though we typically associate world-building with the fantastical worlds of science fiction and fantasy, it has a role in any novel. When writing a techno-thriller, I had to consider what a future technology could do and what it couldn’t do. Those abilities and limitations informed me of who would want it and why. Those individuals, and their motivations, drive the story forward. Sometimes we want to know what an actual FBI agent would do in a situation, but often it’s more important what your FBI agent will do.

Politics. Social structure. Technology. Language. Laws. Faith. Geography. All of these things and more define the world we live in today. And it varies depending on where in the world you are. One thing thriller writers can do is to take some time to consider how these elements define the setting in which your story takes place. Then comes the fun part. What would happen if you changed one of these elements? How could you change it? What would that mean? How would it change your story? What if you changed more than one? Sometimes changing one of these elements even slightly opens up new story ideas and opportunities.

Given your background in business and technology, I’m interested in your thoughts on how the publishing world might adapt if the novel coronavirus doesn’t go away anytime soon.

First of all, I’m hoping it does! If it didn’t, I think we’d see a new evolution in how business is done. The first change was to move everything online. But now that we’re all burned out from video-conferencing meetings and being locked at home with our kids, it’s clear that the past few months were temporary solutions. If we had to adapt this into an extended period, I believe you’d see innovation in the technology space, particularly around communication.

One thing I’ve heard from people in publishing is that a great deal of the business that used to get done in one-on-one meetings over coffee, away from the formality of the office, just isn’t happening. The social aspect of the business has taken a real hit, and I don’t think that’s unique to publishing. Innovators will be looking for ways to replace that social aspect that doesn’t include videoconferencing as we know it today. Virtual reality becomes an interesting opportunity here. Using VR, you could more closely simulate the casual, immersive environment of meeting someone for a coffee. It would give you the feel of being there. You’d be able to read the body language of the person you’re interacting with and hear the sounds of conversation and clanking dishes around you while tasting a coffee you made yourself at home. And you could still do it all while wearing pajamas!

Many of the pieces of that solution exist today, like ambient noise apps on your phone to pipe coffee shop sounds into your headphones. Some are just around the corner, like the ultra-high-speed networks such as 5G necessary to handle the enormous data requirements of VR. And some are yet to be developed. Coronavirus has spurred investments in these areas because many companies believe that the work-from-home trend will continue even if and when the pandemic is over.

This is certainly not the release experience you imagined for your debut novel. Based on your journey so far, what advice do you have for writers who are making their debuts in the coming weeks or months?

Above everything else be flexible. Make backup plans. But if 2020’s proven anything, it’s that even your backup plans may not be enough. Expect that things will change, and that’s okay. Be comfortable with making changes on the fly.

Things came up during my book launch that no one expected. For a while, retailers stopped accepting shipments of books, so there were some inventory problems during launch month. So we promoted the e-book and watched inventory so we could guide readers to where the book was in stock. Black Lives Matter protests arose across the United States and the world, with essential conversations consuming social media feeds. So we changed the content and scheduling of social promotion to not get in the way of those conversations.

Despite all these things, the book is out there, and people are reading it!

The audiobook for BROKEN GENIUS is being recorded now, and the publisher has set a paperback release date for 2021. Foreign publishers are working on translations, which should be released next year as well. I’m just about finished with my next novel, but I can’t say anything about it (spoilers!). There are definitely more adventures to come for Will Parker, so stay tuned!

Drew Murray is a native of Ontario, Canada. After a corporate career in technology, he has transitioned into education and writing. He’s an avid fan of Comic Cons, escape rooms, and board games, which positions him well as the author of BROKEN GENIUS, his debut novel. Drew lives with his family in London, Ontario.