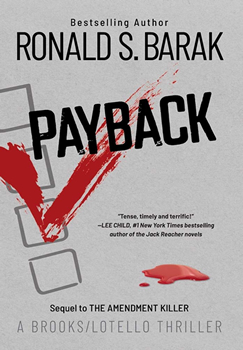 “Death to the Gatekeepers!”

Olympic gymnast, turned physicist, turned lawyer Ronald S. Barak’s latest installment in the Brooks/Lotello murder mystery series, PAYBACK, presents an interesting take on the writer’s conference scene—which is to say that someone is killing off the gatekeepers one by one. He claims on his website that some of his fans believe he is the model for the mysterious antagonist, but of course, Barak isn’t naming names…except when he begins killing off the big ones.

Barak describes PAYBACK like this: “PAYBACK is a fantasy ‘Whodunit’ murder mystery that takes place at a renowned week-long writers conference held every year at the luxurious Hotel Marisol on the sun-drenched island of Punta Maya. Attracting literary luminaries and reading fans alike, the conference is attended by one guest too many, a writer wannabe whose efforts have not received the recognition the author expects, or perhaps one might say … demands.”

In addition to writing a traditional whodunit story, he says that he also wanted to make somewhat of a commentary, an eye-opening, real-world illustration of the decline in society’s morals.

“For example,” he said, “the college admissions scandal and the failure of sports, academic, and church leaders to expel offenders within their ranks who prey on those entrusted to such institutions.”

When asked how he became attracted to the genre in which he writes, Barak states that he has always been a major fan, an enthusiast even, of mystery and suspense, “especially when combined with a ticking time bomb.

“In my earlier Brooks/Lotello thriller novels, readers graciously compared me to the series protagonist Cyrus Brooks. In PAYBACK, many were quick to compare me to the unknown writer wannabe/serial killer in the story, which gave me the idea to create Writing a Murderer, an eight-part YouTube video series already viewed by more than a quarter million viewers on my YouTube Channel.

In regard to the comparison with the killer, he says, “I plead guilty to being a writer wannabe. And (maybe on the inside at least), I might also be a serial killer focusing on those who don’t pay me proper recognition. I think I need my lawyer before I respond.”

When I asked him how he first got into writing, he said it was in response to a dare.

“True story. As the saying goes, with friends like that, who needs enemies? I continue to write because, one, I love writing and (trying to) be creative, and, two, because it’s fun to grow (ignoring my waistline!). Hopefully my writing improves with each attempt.”

I asked him if, during this time of upheaval, he wrote with any particular political bent.

“I am nonpartisan, but I believe many, if not most of our political ‘leaders’ on both sides of the aisle are in need of serious oversight and improvement,” he says. “For that reason, my novels are generally ‘political’ in nature.”

“Any announcements for the thriller-fan world?” I asked.

“My first novel, The Amendment Killer, is being considered for a limited TV series.”

“CRAZY! It required creating a pilot screenplay,” he said. “I had NO idea how to properly write a script. It was like a foreign language to me. So I found a screenwriter who co-authored the one-hour pilot script with me. Learning a new writing language was daunting, but my collaborator was not. Altogether it was a highly professional, educational, and enjoyable experience. I’m not rushing to become a screenwriter, but at least I now have a rough idea of how to do that and I believe it has seriously improved my novel writing appreciation and skill.”

Barak has an extreme admiration for those writers who not only write so well, but who give back to our writing community year in and year out, including those who tirelessly support ITW and ThrillerFest.

That said, I asked him the final question, a two-parter that gets to the heart and soul of Ronald S. Barak, that tells us who he truly is, through and through, to his very core:

Celery with peanut butter or broccoli with ranch? And if you were kidnapped by aliens while eating one or the other, and they only provided you with a lifetime supply of that plus one other food item, what other food item would you hope to be holding in the other hand before being jetted off into the depths of space for the rest of eternity?

“Whoa! That is some serious stuff! Hrm … Well, definitely celery and peanut butter on the one hand, but if I could, if options are available, if I could change peanut butter to peanut brittle, I’d just ignore the celery! And in the other hand, a juicy porterhouse steak, medium rare, or some tasty sushi. My fate is in your hands!”