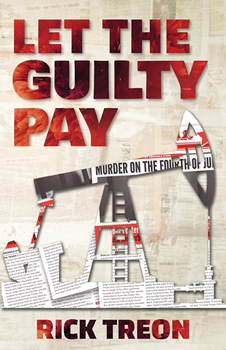 Bartholomew Beck has a secret.

He saw who killed his neighbor, but he lied to the police and now the wrong man is on Death Row.

Oh, and he wrote a bestselling true crime book on the murder, further cementing his lies.

Twenty years after Summer Foster’s death, Beck’s writing career is as cold as her mutilated corpse. He is working on a Texas oil pipeline and trying to get through the day when he finds a co-worker beaten to death with a screwdriver sticking out of her right eye—just like Summer.

This time he has to come clean with what he knows and LET THE GUILTY PAY.

The Big Thrill tracked down award-winning author Rick Treon to find out more about his latest crime thriller, LET THE GUILTY PAY:

The novel takes place across two timelines. When I tell people that, many assume I wrote the two timelines and spliced them together later. But I wrote the story in order, from start to finish. When discussing the writing process or format with early readers, this has tended to be the biggest surprise for them. 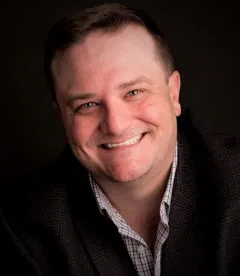 I’ll go ahead and get the cliche answer out of the way and start with Gillian Flynn. I loved all three of her novels, and obviously Gone Girl transformed the suspense/thriller genre. But on that list are other amazing writers such as Michael Connelly, Robert Dugoni, and D. M. Pulley.

Being a journalist for the first decade of my career is probably the biggest influence on my choice to write crime fiction. And, in this book’s case, having a true crime writer and investigative journalist as main characters. I also feel like some of the best commercial fiction today is crime fiction, so it’s almost certainly what I would be reading even if it’s not what I chose to write.

I hope this novel challenges readers’ views on guilt and punishment, and whether or not people can redeem themselves. And, of course, I hope it provides them with plenty of entertainment and a bit of a whodunit.

Absolutely. As part of my research for this novel, I spent time working on oil pipelines in Oklahoma and Texas. Then, as I was writing the novel, a character let me know that she’d been hiding an identity I’d already established in the past. I literally stopped writing and said, out loud, “So that’s who you are!”

Rick Treon is the award-winning author of Deep Background and the Bartholomew Beck series, including the novella Live with the Truth. Rick’s essays have been syndicated across Gannett Media and featured on literary websites The Thrill Begins and BestThrillers.com, as well as journalism nonprofit Big If True. Prior to writing fiction, Rick worked as a reporter and editor for several newspapers in Texas.