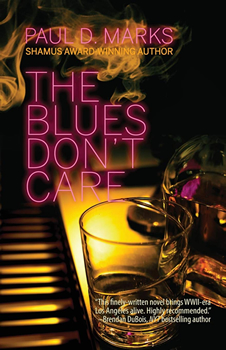 Bobby Saxon lives in a world that isn’t quite ready for him. He’s the only white musician in an otherwise all-black swing band at the famous Club Alabam in Los Angeles during World War II—and that isn’t the only unique thing about him…

And if that isn’t enough to deal with, in order to get a permanent gig with the band, Bobby must first solve a murder that one of the band members is falsely accused of in that racially prejudiced society.

Award-winning author Paul D. Marks sat down with The Big Thrill to discuss his latest thriller, book one in the Bobby Saxon series, THE BLUES DON’T CARE:

I think the thing that draws me to mysteries is a sense of wanting justice. Mysteries usually tend to have a resolution. And there is usually some kind of justice that is reached at the end, even if not everyone gets their due. I like having that happen in my novels, ‘cause it doesn’t seem to happen very often in real life.

I’m going to be subversive here because I’m going to mention a couple “things” that aren’t authors. One is an artist, the other is a film genre.

But authors would include Raymond Chandler, Ross MacDonald, James Ellroy, Walter Mosley, John Fante, David Goodis. And more, but I’m trying to keep this down. And, of course film noir and Edward Hopper, a “noir” painter if there ever was one.

Okay, so Chandler isn’t the most original choice. But original or not, he’s the one who made me fall in love with crime fiction. And I don’t think I’m alone in that regard. The first five authors on my list all have something in common: Los Angeles. Their stories might be set at different times, but much of what they write is set in the City of Angels.

What ties them all together for me, and since I don’t want to write a book here, is that they all explore the dark side of the city, the parts where the sun doesn’t shine quite as brightly, where the palm trees sag and there are potholes and dark alleys with even darker shadows. And though Goodis doesn’t really write about LA, he writes about the dark places. And he spent some time here getting disillusioned about Hollywood and the Golden West.

I hope they’ll be entertained first and foremost. And I hope it gives them a sense of the time and location—what it must have been like to have lived in that era, the Los Angeles homefront during World War II. But also, understanding and compassion for people who are different and outside of the “normal” culture. Bobby’s an outsider amongst a group of society’s outsiders and outcasts and that brings up issues of what is “normal” and acceptable in that world and in today’s world.

Definitely character. I had written three short stories with Bobby Saxon and thought he was worthy of a full novel. He’s an interesting and complex character and unlike anyone I’ve written about before, so I wanted to explore his character in more detail. And while I love the setting, 1940s Los Angeles, it was the character that really came first.

The biggest challenge was getting a realistic view of that time, both in terms of the setting and the characters. There are so many movies that I grew up with that were made in that era or about that era that sometimes you have a Hollywood version of what it was really like. Interviewing people who lived through it, like my mom and her friends, was a huge help and made the novel more authentic.

The biggest opportunity was being able to write something set then, but with a perspective from the present of the things that were happening then. It makes you question what history will make of us and the choices we make.

Paul D. Marks has written five novels, co-edited two anthologies, and written countless short stories. He’s won a Shamus Award, was voted #1 in Ellery Queen Mystery Magazine’s 2016 Reader’s Choice Award, and been nominated for Anthony, Macavity, and Derringer Awards. His story “Windward” was chosen for The Best American Mystery Stories of 2018. His short fiction has been published in Ellery Queen Mystery Magazine, Akashic’s Noir series (St. Louis), Alfred Hitchcock Mystery Magazine, Crimestalker Casebook, Hardluck Stories, Hardboiled, and many others. Paul has served on the boards of the Los Angeles chapters of Sisters in Crime and Mystery Writers of America.