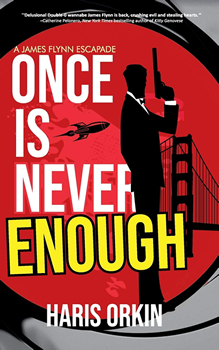 An old enemy seeking revenge sends James Flynn back around the bend and into a wild adventure even more deranged than his last. Once again, he believes his psychiatric hospital is the headquarters of Her Majesty’s Secret Service, and that he is a secret agent with a license to kill.

With the help of Sancho, his reluctant sidekick, Flynn confronts a mysterious new adversary just as unhinged as he is—and far more deadly. The fate of the world now rests in the hands of a man suavely dancing on the thin line between objective reality and batshit crazy.

Haris Orkin is an author, playwright, screenwriter, and game writer. His play Dada premiered at The La Jolla Playhouse. A Saintly Switch was produced by Disney and directed by Peter Bogdanovich. He has written screenplays for Universal, Sony, Fox, and Paramount. His games have been nominated for the WGA Award and the BAFTA. His debut novel, You Only Live Once, was published by Imajin Books in 2018. The sequel, ONCE IS NEVER ENOUGH, is slated for April.

The Big Thrill had a chance to ask Orkin a few questions.

What do you hope readers will take away from your book?

Laughter and escape in this nervous and uncertain time.

I love the relentless suspense, action, and surprises of thrillers and thrilling mysteries. I love to see ordinary characters, grounded in reality, put into extraordinary circumstances, then see how they survive and triumph.

Was there anything that you discovered when you wrote this book?

This was my second in the series, and I had much to learn in terms of creating an ongoing series. I did a lot of research on artificial intelligence and high tech in general and discovered many shocking possible dangers.

What authors or books influenced you in your writing career?

I have eclectic taste. I love thrillers and mysteries, but I also love satire and comedy. Writers who have influenced me run the gamut from Ian Fleming, Raymond Chandler, Dennis Lehane, and Elmore Leonard, to Ken Kesey, Kurt Vonnegut, Richard Brautigan, and Douglas Adams.

What literary character most inspired you to create James Flynn?

Don Quixote. To me, Flynn is a modern-day Quixote. Who would Don Quixote imagine himself to be if he existed today? Probably not a knight errant, but an international superspy.

What are you doing to promote your books?

This is only my second published novel, so I’m still new at this. I’m published by a small publisher in Canada, so I help with the marketing, although I think that’s true of most authors at this point. I do have a background in advertising, which helps. I was at Left Coast Crime last month promoting it there before the conference was unfortunately canceled.  I’m also doing online promotions, like a launch party on Facebook.

I’m already working on the third book in the series. There’s a producer in Hollywood who’s interested in developing a streaming series based on the books. Having worked as a screenwriter, I know it can be a long and sometimes painful process to get something produced. So I’m not holding my breath, but I am hopeful. I’m also working as a narrative designer and voice director on a number of video game projects, collectively referred to as my other career.

Considering the current state of the world, I’m doing a bit less than I used to. I love hiking and my wife and I still head up into the mountains around Ashland, Oregon, where we live. Occasionally, we’ll take our little dog, Penny, on neighborhood perambulations.

Our son lives in California and I play various online video games with him. It’s a great way to hang out virtually. I love to read fiction, history, and biographies, and books on science and politics and world affairs, and everything in between. One of my favorite parts about writing is the research. Even though my books are comedy thrillers, I still like to get all the high-tech details correct.

Haris Orkin is an author, playwright, screenwriter, and game writer. His play Dada premiered at The La Jolla Playhouse. A Saintly Switch was produced by Disney and directed by Peter Bogdanovich. He has written screenplays for Universal, Sony, Fox, and Paramount. His games have been nominated for the WGA Award and the BAFTA. His debut novel, You Only Live Once, was published by Imajin Books in 2018. The sequel, ONCE IS NEVER ENOUGH, is slated for April.