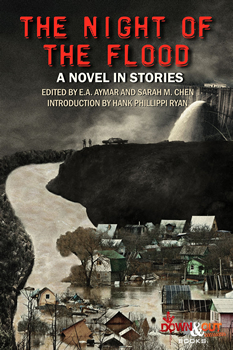 THE NIGHT OF THE FLOOD, an anthology by 14 authors, portrays a small, fictional town in Pennsylvania that, after someone blows up the dam, finds itself trapped with con artists, serial killers, thugs, and good people just struggling to survive in a soon to be underwater nightmare.

What sets the story in motion: The execution of the first woman convict in the state of Pennsylvania has taken place in spite of threats from a group of passionate female activists. In response, the women blow up the dam, flooding the entire town of Everton in the valley below. A nightmare of apocalyptic chaos follows. Lawlessness and taken opportunity are the rule of the day, and each tale is told from a different perspective in the same arc.

The story starts near the beginning of the events that brought about the massive flood, but rather than focusing on the wall of water that is about to fall on the small town, the storytellers help us experience the thoughts and motivations of several different levels of society in the midst of an oncoming apocalypse.

The major part of the story has to do with a widely talked about gang of women, “The Daughters,” who, in response to the execution of a woman who had murdered two men who had raped her, blew up the dam that held back the water above their town.

I asked Aymar and Chen where the story concept came from.

“The idea originally came from one of the contributors, J. J. Hensley,” Aymar said. “A bunch of us all write for ITW’s The Thrill Begins and, through the course of working on the site, have become really good friends. J. J. thought we should all work on an anthology together, and we toyed with that idea until it became THE NIGHT OF THE FLOOD. I’d like to note that, although J. J. did come up with the idea and wrote a terrific story for the anthology, we totally kept his name off the cover. Ha, ha. Sarah and I rule.”

The book is written as a collaboration of 14 thriller writers, each with their own focus. I asked them how the contributing authors were selected.

“Originally,” said Aymar, “It was just going to be the regular contributors (a la “Murderer’s Row”) from The Thrill Begins. But Tom Sweterlitsch had some weird contract glitch that kept him from playing, and Susi Holiday, Mark Pryor, and Rebecca Drake had yet to join the dream. So the book, with the contributors we had, was going to be short at about 20,000 words. We decided to recruit some of our friends to play along, and brought in Sarah, Angel Colon, Alan Orloff, Mark Edwards, and Hilary Davidson. All of them are great writers and took to the idea seamlessly. That was actually really fun–to see other writers play in this fictional world.”

The idea of 14 different authors working on the same book is intriguing. How would so many writers be able to work together to come up with stories that fit so seamlessly with one another? They used a Google doc that laid out the scenario and then each author chose from a timeline the hour of the night they wanted to write about, thus the “novel-in-stories” concept. The idea was for each writer to sketch out a general premise of their story and then everyone could see what each was working on. This allowed some cross characterization as well as working off of common landmarks and businesses. The only problem was sometimes the premise noted on the Google doc was completely different from the writer’s completed story.

With such an open idea of how it should all work out, it must have been difficult to find authors who all fit the bill to be able to come up with the stories that worked this well. But Aymar said it turned out to be no problem at all.  And you don’t need to take his word for it. As Publishers Weekly said in its review:  “E.A. Aymar and Chen deserve kudos for putting together a distinctive anthology.”

THE NIGHT OF THE FLOOD is a very well written, breathtaking look into the chaos of a town facing the end, with many questionable avenues of escape.