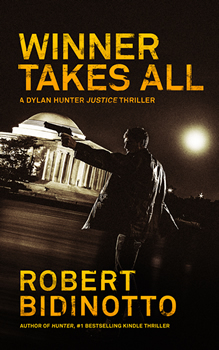 Investigative reporter Dylan Hunter is a vigilante, and this time he’s trying to stop a murderous international conspiracy from taking over the presidency of the United States. The stakes are high, and Dylan must make a choice that will forever seal his fate—including his future with the woman he adores. As political violence sweeps the nation’s capital, it’s an all-or-nothing scenario in Richard Bidinotto’s WINNER TAKES ALL, the third installment in the Dylan Hunter series.

WINNER TAKES ALL explores the lust for power in all its forms within a “sweeping, grand-scale political thriller.” When Bidinotto wrapped up the second Dylan Hunter thriller, 2014’s Bad Deeds, all he knew was that two of his characters—billionaire Avery Trammel and hitman Ray Lasher—would conspire to throw the election to a malleable political puppet. When it was time to flesh out his plot, he says he looked no further than what he calls the “crazy” 2016 election cycle.

“I worked into the story such things as the ongoing threat of terrorism; controversies over ‘fake news’ and media bias; scandals over sexual manipulation by the rich and powerful; government harassment of private citizens; worries about border security; leaks of classified material for political purposes; and the quirky, unsavory personalities of today’s political candidates,” Bidinotto says. “But I didn’t toss in all those ingredients willy-nilly, just to spice up the story. They’re integral to the theme and the plot. Real-world events played perfectly into my story world’s theme of power-lust.”

One of the scarier aspects of WINNER TAKES ALL is the means by which foreign interests funnel money into political campaigns—a plot element that was inspired by Bidinotto’s work for a D.C. nonprofit watchdog group.

“[The] machinations I describe in the novel are what is going on in the real world,” he says. “I learned from several years of first-hand research, exactly how this happens.”

Other research involved the CIA. Bidinotto knew a great deal about the nation’s top intelligence service from his previous books, but the agency has undergone a major reorganization since the last installment of the series.

“That seriously affected the trajectory of WINNER TAKES ALL, because two of my major characters—[Dylan’s fiancée] Annie and her boss, Grant Garrett—work there, in jobs that would have been drastically affected by the real-world CIA shakeup,” Bidinotto says. “I did my homework about the reorganization—including discussions with current and former CIA employees. They provided context, insider jargon, and ‘you-are-there’ descriptive details that add realism to the scenes and operations at Langley.”

Bidinotto acknowledges that what he liked the most about writing WINNER TAKES ALL was also what gave him the most trouble.

“What pleased me the most is exactly what was the most maddening: integrating the countless elements—multiple characters and their subplots, real-world events and settings, backstory and relationships established in the previous books—into a logically coherent, fast-moving, and suspense-filled narrative,” he says. “Because it has so many moving parts, WINNER TAKES ALL was excruciatingly difficult to structure. Often, I found the most logical flow of events clashed with the need to keep up an exciting pace.”

To keep all those “moving parts” from spinning out of control, Bidinotto created a painstakingly detailed outline. Of the three years he spent writing the book, at least two of them were devoted to getting the outline right.

“I’m a meticulous, even obsessive, plotter and outliner,” he says. “I don’t want to draft a lot of stuff I later have to scrap. So I don’t start writing until I know I have a viable plot structure—scene by scene. With their extensive casts, interweaving subplots, and devious twists, [these books] are way too complex for me to write by winging it.”

And yet, Bidinotto doesn’t know everything that’s going to happen before he starts writing. In WINNER TAKES ALL, he “pondered long and hard” about where the relationship between a CIA officer and a vigilante could go.

“If the reader is kept guessing until the end of the novel, well, that’s because, I was wondering too,” he says.

Another series regular, homicide detective Ed Cronin, surprised Bidinotto with a new revelation about his character near the end of the novel. “At that point, I realized it would enrich the entire series arc—even add depth to earlier novels—to reveal it to the reader. So I had to invent and insert a couple of potent and poignant scenes.”

While Dylan Hunter’s exploits will continue , Bidinotto notes that WINNER TAKES ALL marks the conclusion of a trilogy within the series.

“I conceived Hunter and Bad Deeds as independent installments, but then, by accident, I did something fateful in Bad Deeds,” he says. “I wrote a prologue that tied back to prior events in Hunter, then added an epilogue intended to serve as a bridge to the next story. At the time, I knew very little about WINNER TAKES ALL, but that epilogue planted seeds that had to be harvested in the coming book. So without realizing it, I’d set up WINNER TAKES ALL to become the wrap-up of a wider narrative arc. Yes, each novel can be enjoyed as a self-contained story; but with WINNER TAKES ALL, they can be seen as related parts in a larger saga.”

For future installments, Bidinotto plans to move away from sprawling, international plotlines in favor of laser-focused, character-driven thrillers.

“I went big in the first three with complex, large-scale plots and many characters,” he says. “Frankly, I don’t know how much bigger I could go than I did with the ‘fate of the free world’ political conspiracy in WINNER TAKES ALL. I think I need to go in the opposite direction: more intimate vigilante thrillers, with fewer characters but great emotional intensity. Dylan’s relentless sense of justice will still lie at their core, but the high stakes will be the fates of individuals, not of Western civilization.”

He’s also quick to point out that he has a fascinating collection of secondary characters that he’d like to explore. “[Dylan’s research assistant] Wonk cracks me up every time he appears, and I’m itching to give him more stage time,” Bidinotto says. “Then there’s Danika, the fetching African-American secretary at the office where Dylan rents space. I have a file folder of note cards filled with story ideas.”

Robert Bidinotto is author of HUNTER, a #1 Kindle bestselling thriller and a Wall Street Journal “Top 10 Fiction Ebook.” HUNTER was heralded as “A masterwork of thrills and suspense” by Gayle Lynds, ITW co-founder and New York Times bestselling author. Robert is also author of the award-winning sequel BAD DEEDS.

Robert earned a national reputation as an authority on criminal justice while writing investigative crime articles as a former Staff Writer for Reader’s Digest. His 1988 article “Getting Away with Murder” was named a 1989 finalist for a National Magazine Award from the American Society of Magazine Editors.

Robert also is author of the acclaimed nonfiction book “Criminal Justice? The Legal System vs. Individual Responsibility,” with a foreword by John Walsh of the “America’s Most Wanted” television show. He also wrote “Freed to Kill” — a compendium of horror stories exposing the failings of the justice system. Robert drew upon this background and his personal experiences with crime victims to write HUNTER.

He received the Free Press Association’s Mencken Award in 1985 for “Best Feature Story,” and he has been honored by the National Victim Center and other victim-rights organizations for his outspoken public advocacy on behalf of crime victims. As a magazine editor, in 2007 he won the industry’s top honor for editorial excellence: the Folio Gold “Eddie” Award.

Robert makes his home on the Chesapeake with his musician wife, Cynthia, and their cat, Luna (who plays a supporting role in the Dylan Hunter Thrillers series). He now writes fiction full-time and is at work on the further adventures of Dylan Hunter — “the new face of justice.” You can find out more about him and his colorful hero, Dylan Hunter, at his website, The Vigilante Author.