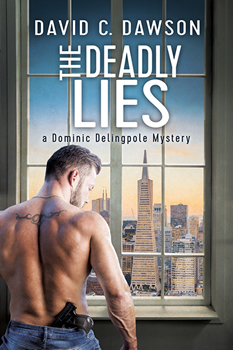 With THE DEADLY LIES, author David C. Dawson brings us the second story in his Dominic Delingpole adventure series.

In this latest installment, Dominic and his partner, Jonathan, are on a romantic Spanish honeymoon, and things are perfect… except Dominic has kept a secret from his husband. He’s failed to tell Jonathan that he plans to meet his former lover, Bernhardt, who is speeding on his way from Germany to present Dominic with a mysterious gift.

But before the exchange, Bernhardt is killed in a suspicious car accident. Shortly before he dies, he sends Dominic a bizarre text message that will take the newlyweds on a hair-raising adventure.

Lies upon lies plunge Dominic and Jonathan into an internet crime that could destroy the lives of millions of people. What is the mysterious Charter Ninety-Nine group? And will their planned internet assault force Dominic to choose between the fate of the world and the life of his lover?

The Big Thrill recently caught up with Dawson to learn more about his series and his writing process.

What first drew you to writing crime thrillers?

I’ve always read crime thrillers from about the age of seven. Starting with Enid Blyton’s The Secret Seven, progressing through John Buchan and Agatha Christie, to some of the great contemporary crime thrillers around today. I was very privileged to meet the British writer Sophie Hannah recently. She’s been endorsed by the Agatha Christie estate to write new Hercule Poirot stories. What I love about crime thrillers is the elegance of their structure. I enjoy creating complex plots, feeding readers clues and finally tying up all the loose ends in the concluding chapters. Nothing happens by chance in my books. Everything is a clue.

Tell us about your character, Dominic Delingpole. What has his journey been like up to this point?

Dominic has just got married to his boyfriend Jonathan. At the end of Book One, Dominic nearly dies, Jonathan rescues him, and the couple decide to head off to Spain for a restful honeymoon. Of course, it’s not restful—Dominic’s past catches up with him. He discovers a former boyfriend is part of a global group that plans to change the world order by manipulating computer networks. Dominic is caught up with the group, and when they are also targeted by the establishment, seeking to restore the status quo, this threatens both his relationship with Jonathan, and their lives together.

Empathetic characters and a cracking pace. People tell me they enjoy my books because they’re page turners. It’s important to leave the reader in suspense at the end of each chapter. The reader is curious to know what happens next, and says, “Okay, just one more chapter.” It’s what draws me to a good thriller writer, and my readers seem to want the same.

Of course, if you’re not interested in the characters, then you won’t want to read on. That doesn’t mean to say they must be likeable. But they must be interesting and complex. One of my favorite writers is Michael Dobbs, who wrote the original House of Cards set in London. Some of his characters are vile! But they are complicated and three dimensional. Not one of them is all good, or all bad. Creating twists and complexity in your character’s personalities is as important as creating twists in the plot.

I write first drafts best in the morning, and I edit best in the evening. So that’s how I organize my time. I’m an early riser, and I’m also late to bed. So I’ll write from 6:30 in the morning until about 9 or 10. Then I have my day job to contend with. If it’s not a working day, I’ll write through until lunchtime. After lunch, I reward myself with a walk, or a ride out on my motorbike. It clears my head, and sets me up to come back and edit in the evening. A ride out on my motorbike gives me the chance to untangle plot blocks, or think the story through from a particular character’s point of view. Or sometimes it’s just a lot of fun!

I have a romantic suspense novel with Dreamspinner Press, which features an entirely new set of characters. Luke Diamond is an American living in London who’s lost his memory. The question is, why? Something terrible has happened to him in his past. He meets Rupert Pendley-Evans, a BBC journalist and British aristocrat. Together, they uncover the shocking truth behind what has led to Luke’s loss of memory.

I’ve thoroughly enjoyed writing it, and I’ve drawn on lots of my experience as a journalist and documentary maker with the BBC. It involved a great deal of research into a vile practice which is still legal in both America and the U.K. As a result, I am now actively campaigning for its abolition. 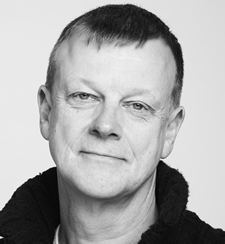 David C. Dawson writes contemporary thrillers with gay heroes at their core. His debut novel The Necessary Deaths has been described as “a real page turner.” It won Bronze for Best Mystery & Suspense in the FAPA awards. Rainbow Reviews said it was “an exciting read with complex characters.”

DSP Publications will publish the second in the series, THE DEADLY LIES, this December. He also wrote a short story about a chance encounter with George Clooney for the anthology Love Wins, published by Dreamspinner Press.

David worked for the BBC as a journalist. He lives near Oxford in the UK, with his ageing Triumph motorbike and two cats.