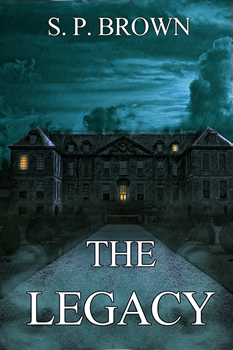 Harry Black has a curse he doesn’t understand, or could it be a gift he can’t escape? He’s the last heir of a dying clan, but there’s a problem. To inherit, he must fulfill the only stipulation in the will—accept the Black Family Legacy. After seven weeks of the same nightmare, Harry is desperate to see a psychologist to be “cured.” But instead of help at the hands of Dr. Virginia Rankin, Harry falls headlong into the legacy’s grip when he experiences an ecstatic utterance and inexplicably reveals information to her that he couldn’t possibly know.

Shocked that this stranger has knowledge of her family’s dark secret, Ginny makes a frantic call to her brother. The call makes the Minority Whip of the US Senate late for a meeting at a world economic summit in DC, delaying him long enough to avoid a terrorist bombing that kills two other senators and dozens more innocent people. By saving the life of Dr. Rankin’s famous brother, Harry has also sealed his own fate. Wanted or not, the Legacy has finally come to him…

The Big Thrill met up with author S. P. Brown to discuss his latest novel, THE LEGACY:

It’s mixed genre, so I hope it adds something to both paranormal and general thrillers.

S. P. Brown has been reading and writing from a very early age. He blames this on his addiction to all those great characters produced by Marvel Comics. Inevitably, this led to a passion for fantasy/sci-fi novels, which led to his first book, Phoebe Alleyn and the Quantum Sorcerer. A professor and father of three daughters, Brown lives with his wife in Starkville, Mississippi, where he is hard at work creating new mythologies for children and adults.