When Murder’s In the Recipe 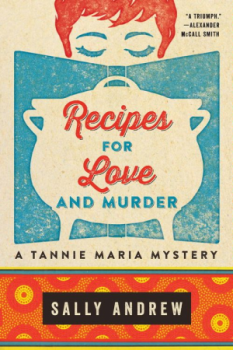 With a master’s degree in adult education, Sally Andrew was a social and environmental activist before she and her partner decided to move to the Klein Karoo.  Now they live on a nature reserve with a giant eland and a secretive leopard for company.  Along the way, Andrew created Tannie Maria, a delightful character, fixated on cooking, who has to give up her recipe column to become the local newspaper’s agony aunt.  She finds she has a talent for that too, but it leads her into a nasty series of murders.  Andrew’s debut novel, RECIPES FOR LOVE AND MURDER, became an instant success around the world.  Alexander McCall Smith said it was “a vivid, amusing and immensely enjoyable read” and called it “a triumph.”

Andrew’s Recipe for Murder is:

1 stocky man who abuses his wife

1 medium-sized tough woman in love with the wife

1 handful of red herrings and suspects mixed together

Throw all the ingredients into a big pot and simmer slowly, stirring with a wooden spoon for a few years. Add the ducks and chillies and brandy towards the end and turn up the heat.

Was this always the plan of the book, or did it all evolve as you wrote the story?

I did plot the basic structure (or recipe) of my book very early on. Then I could play within that framework. The ingredients remained largely the same, but the quantities and length of time cooking varied, as the characters started taking over.

Although RECIPES FOR LOVE AND MURDER has some cozy aspects, there’s a twisty plot and a vicious murderer at the core of it.  Is this the sort of combination cozy and thriller that appeals you?  Do you think small country towns often have such skeletons well hidden until they are suddenly exposed?

Yes, I love a cozy mystery, but if there’s not enough action, it can put you to sleep. A crime novel unavoidably contains violence, but although we need to face the reality of murder and abuse, I prefer to focus on the healing after violence and the quest for justice (rather than graphic gory details, which I sometimes suspect are a celebration of violence rather than a challenging of it). Small towns do have much less crime than the cities, but this makes it more shocking when murder occurs. Also, because people’s lives are so interconnected there are many opportunities for red herrings.

What do you think makes a good story?

A good story has a satisfying shape and rhythm. It keeps you engaged, opens your heart or mind to something new, and reminds you of what you already know

What do you think makes good suspense writing?

Characters that you care about. Conflict—more than one. Apart from the main unresolved conflict of the crime, ensure the protagonist suffers and wants something she can’t have (yet). Unanswered questions. Contrast, e.g. life and death, light and dark, suspense and relief, action and quiet (like music). Pathetic fallacy—surrounds that support the mood of the main action; and sometimes descriptions that contrast with this mood. Red herrings and twists and turns, both expected and unexpected. Use fresh ways of writing about old themes. Write from the heart, but don’t overstate your description; allow feelings to be evoked from the reader.

Tannie Maria is a wonderful character. Steeped in the traditions of the Karoo, “cooking with love,” and caring, but she’s also as hard as steel when she has to be. Is she based on a real person, or what brought you to her?

I do have a cute Afrikaans friend, called Maria, but I borrowed her name, not her character. I invented Tannie (Auntie) Maria as I sat under a camelthorn tree in a Namibian desert. I wanted someone grounded, tough and real; “simple” but sharp. I also wanted a woman who could not only be an amateur detective, but also explore the themes of love, and add humor. The love theme is explored not just in her personal tale, but in the agony-aunt letters that she receives. She responds to these with some common-sense advice, but mainly with a healing recipe. Her obsession with food is at the core of her quirkiness.

Tannie Maria has mouth-watering recipes for cooking, and she includes many of them at the end of the book.  Would you tell us where the traditional recipes come from, and have you tried them all out yourself?

I have read through dozens of traditional recipe books, and got the best traditional recipes from family, friends, and chefs. I enjoy recipes that are a few generations old, as they come with a spell of sorts. I employed a professional chef to test and adapt all the recipes. I have tasted them all, and only included those I consider to be moan-out-loud delicious.

Jessie Mostert is the country newspaper’s journalist.  She’s sharp and ambitious, and seems somewhat frustrated in the (normally) rather dull reporting environment of fetes and church meetings in Ladismith.  Do you see her spreading her wings in the future?

I think I will keep the tension of her trying to flap big wings in a small town. She does succeed in finding some excitement in the Klein Karoo. I can’t say for sure what she will get up to; I do give her space to fly, so I will see where she takes me.

You clearly have a great affinity for the Klein Karoo.  Would you tell us how you came to live there and what attracts you to it so strongly?

My partner is a wilderness artist and we often do long camping trips to wild areas in Southern Africa. At some point we realized that we could base ourselves somewhere wild, and visit the city, rather than the other way around. We bought into a nature reserve not far from Ladismith (where my Tannie Maria mysteries are set). Although we have lived there for only seven years, it feels more like home than any other place. Why do some places make your soul sing and give you peace down into your bones? The feeling of deep Africa, even though it is only 300 km from Cape Town. The ancient gwarrie trees, the low dry hills, leopard and kudu as neighbors. The karoo violets that explode into color when the rain finally comes. These descriptions touch on it, but perhaps it’s best not to reduce it to words.

What writers influence your work?

Herman Charles Bosman taught me about understated storytelling and the poetic rhythm of language. Agatha Christie, Erle Stanley Gardener, Dick Francis, Lindsey Davis gave me the love of a good “cozy” mystery (and lovable, serial characters). Kingsolver set an example of how to integrate social issues into fiction writing. Janet Evanovich and Carl Hiaasen showed me how crime and laughter can go together. Evanovich and Andrea Camilleri illustrate how food can help “transport” the reader. And writers such as Sue Grafton and Sara Paretsky gave me role models for strong female protagonists.

The second book in the Tannie Maria series, The Satanic Mechanic, has been published in the UK and Australia. It will be released in October in South Africa, and early next year in the US. In this book a San (a.k.a Bushman) activist is poisoned in a beer tent at the Klein Karoo Arts Festival. Tannie Maria also addresses the PTSD (Post Traumatic Stress Disorder) resulting from her abusive marriage, in a therapy group run by a man known as “the satanic mechanic.”

For more information on Sally Andrew, please visit her website.