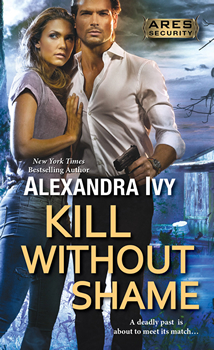 Lucas St. Clair’s prestigious family had a political future neatly planned out for him—one that didn’t include his high school sweetheart, Mia Ramon. Under their pressure, Lucas gave her up. But since surviving captivity, he’s a changed man—and a crucial member of ARES Security. When he discovers a dead man clutching a picture of Mia that bears a threatening message, his fiercest protective instincts kick in, and he knows he must go to her.

Mia has never forgiven Lucas for breaking her heart, and she’s convinced her feelings for him are in the past. But it’s soon clear that isn’t true for either of them. Now, determined to solve the crime and keep Mia safe, with his ARES buddies backing him up, Lucas will have to reconstruct the murder victim’s last days—and follow a lethal trail that leads right back to the fate of the woman he still loves.

The Big Thrill recently had the opportunity to chat with Alexandra Ivy about her latest novel, KILL WITHOUT SHAME.

The power of friendship.  I have created a group of ex-soldiers who have survived the hell of being prisoners of war, to come home and offer their skills to those in need. InKILL WITHOUT SHAME, I also added in a layer of friendship with Mia and the man who turns up dead in the first chapter.  I’m fascinated with the idea of people willing to sacrifice everything for those who they love.

I hope I have a unique voice.  I started in historicals, and then moved to paranormals, but everything I write always has a lot of action, a lot of emotion, and a lot of humor.  I hope that I can add a new twist to this genre.

I did a lot of research, and although I lived in Louisiana for several years, I had no idea how swiftly the wetlands are shrinking every year.  I briefly touch on charities that are working to save the precious land, but I hope to stay involved with those people who are racing to protect the shrinking marshes.

The book continues the overall story arc that I started in book one of the ARES series, Kill Without Mercy.  I have a mysterious stalker that is tormenting the men of ARES. A stalker who they fear followed them from the Middle East.

So many it’s hard to list them all.  First of all, I started reading Agatha Christie when I was very young.  I love her ability to capture a place or a person with just a few sentences.  Whenever I feel like I’m getting too long-winded, I pick up an Agatha Christie and I remind myself that less is more.  I also have read everything Janet Evanovich has written. I love her ability to capture the humor of everyday life.  And right now I’m obsessed with Lee Child and the Jack Reacher novels.  I love how he grabs you by the throat on the first page and takes you on a wild ride that doesn’t end until the last page.

“A fantastic blend of romance and suspense…thrilling to the end.” — Mary Burton, USA Today bestselling author of Kill Without Mercy 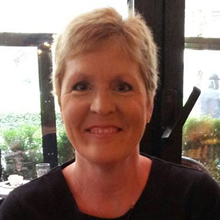 Alexandra Ivy is a New York Times and USA Today bestselling author of the Guardians of Eternity, as well as the ARES Security series.  After majoring in theatre she decided she prefers to bring her characters to life on paper rather than on stage.  She lives in Missouri with her family.