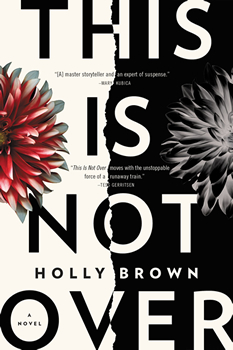 Much like a story from one of the original masters of psychological suspense— Charlotte Armstrong—author Holly Brown’s latest thriller, THIS IS NOT OVER, draws its suspense from what might otherwise be a deceptively ordinary event.

Miranda and Dawn are two women from very different walks of life. Miranda, the owner of a Santa Monica beach house which she rents out for profit, refuses to return a complete deposit to Dawn and her husband, accusing them of having caused damage to her property. What begins as a minor dispute ensues and escalates, taking on a life of its own.

In this interview with The Big Thrill, Brown chats about the inspiration for her new book and how her “day job” can sometimes spill over into her fiction.

What inspired you to write THIS IS NOT OVER?

Oddly enough, personal experience! I stayed in a house rental with my family, and afterwards, received an email from the host saying that she wasn’t returning my deposit because of a “child-sized gray stain” on her white sheets. I was totally offended, and sure she had to be lying (she didn’t include a photograph). She was offended that I’d suggest she was lying. We went back and forth a few times, with increasing righteous indignation on both sides, and then she kept the deposit and I left a pointed review. That was that.

Except that the writer in me recognized how much both the host and I were getting into our own anger, with a virtual stranger. It got me thinking about people’s raw spots, and how strangers can mutually rub against those, and about how we project things onto others. I also thought: What kind of characters, under what type of circumstances, would have just kept going, even to their own peril?

I came up with Miranda and Dawn.

Were at least some of the characters based on someone with whom you are acquainted?

As a therapist, I’ve worked with parents of addicted children before, so that informed the character of Miranda in a certain way, but no, she’s not based on anyone I know. Dawn was fully my own.

In your practice as a marriage and family therapist, how often does the issue of “enabling” come up?

Enabling and codependency come up fairly often. Codependency is about being consumed with the well-being of someone else, so much so that it determines your own. It’s something to which I’m very alert, because I believe nearly all parents struggle with it, to different degrees. Miranda’s experiences are at one extreme, in regard to her son’s addiction to methamphetamines, but at the other end are just the normal parenting challenges. There’s that saying about how having a child is like having your heart walking around outside your body, and it’s very hard to see that heart at risk of being broken without wanting to intervene.  For some clients, enabling and codependency are definite patterns; for others, the instances are more isolated.

Was it difficult getting into the mindset of two very different women, and did you find yourself at some point empathizing with one over another?

It was fairly easy, actually. I empathized with both, in that they were each pushing the other’s buttons, sometimes intentionally, sometimes unwittingly. I started a lot of chapters with the other person’s correspondence (like a Dawn chapter would begin with an email from Miranda), and then I would think about how that character would react to what had been said. I would think about what could be misconstrued. I was highlighting one of the pitfalls of so much texting and emailing: If you’re not a flawless communicator (and who is, really?), there’s a lot of room to be misunderstood. That’s what lends fuel to the fire throughout the novel, a key reason why the flames keep going higher.

It tends to be my default. I enjoy writing as an act of ventriloquism, and getting to closely inhabit the people of my own imagining. Voice is important to me, and I can tap into it more easily in first person. But when I want to achieve a bit more distance because it serves the story, third person helps me do that. I’m working on a novel right now where I’m using third person.

How would you say THIS IS NOT OVER differs from other books you have written?

My first novel, Don’t Try to Find Me, alternates the voices of a mother and her teenage daughter who’s run away from home. A Necessary End was domestic suspense with alternating chapters by a husband and wife. THIS IS NOT OVER is different because it’s about two strangers rather than family. On the surface, they have little in common, and yet they manage to hook into each other’s psychology (some might even say pathology) in an absorbing way, almost like a lock-and-key. What creates that linkage—what they’re trying to avoid in their own lives and what becomes safer to project onto one another rather than deal with at home—drives the action. So in that sense, it’s my most psychological novel yet. 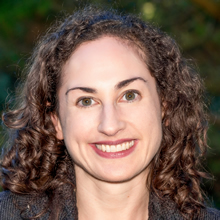 Holly Brown lives with her husband and daughter in the San Francisco Bay Area, where she’s a practicing marriage and family therapist. She is the author of the novels Don’t Try to Find Me and A Necessary End. Her blog, “Bonding Time,” is featured on the mental health website PsychCentral.com.

To learn more about Holly, please visit her on Facebook.