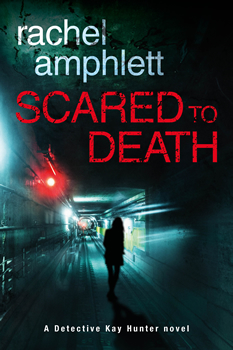 At one point or another, every writer has questioned his or her commitment. Maybe it was when the alarm went off again at 4:30 AM because it’s the only writing time available. Maybe it’s after the latest rejection letter, because you lost count of how many you’ve received. Maybe it was during that moment when the words just wouldn’t come.

How serious am I about my writing? the struggling writer wonders yet again.

For Rachel Amphlett the question burned inside, Then, one day “I made the decision that my writing was more important than my job.” The Brisbane, Australia-based author decided the time was right for a five-week writing sabbatical. “My boss was really shocked. I think my friends and my family were too. I feel like this is it. I’m on the tipping point, and I want to make such a good go of this. I’ve got one chance at this. If I let it go, I don’t think it’s going to come around again.”

The end result was Amphlett’s Kay Hunter series, and the debut novel SCARED TO DEATH appeared on bookshelves last month.

With seven previous published novels to her credit—including the Dan Taylor espionage series—it could be argued that Amphlett had developed a good set of thriller-writing chops. But in her own mind, there was still a lot of untapped potential waiting to break out. “Writing in different sub-genres of crime, you do learn more. You give yourself stretch targets.”

To reach her targets, Amphlett first stepped back from her espionage-based, plot-driven Dan Taylor series. Fans of the series will be glad to know that the step back is only temporary.  The series will continue. However, Amphlett was more interested in exploring a truly character-driven crime story. “Espionage thrillers are plot driven. Writing SCARED TO DEATH enabled me to get into the heads of the characters even more. That’s what I wanted to get into, the sense of being inside a character’s head and how that darkness (in the case of the antagonist) comes out and motivates them and drives them.”

When asked if she could bring forth the darkness in her antagonist, yet keep him relatable, Amphlett replied, “Early reviews are coming back, and people are feeling that. That’s what I like. I like that people are uncomfortable empathizing with a killer.”

The other thing Amphlett did to stretch herself as a writer was immerse herself in the police procedural genre. She did her research, including devouring interviews with well-established crime writers. It quickly became clear to her that that the space was not only crowded with great authors, but raving fans as well. “You have to do this well. The people who read these books know the genre better than the writers sometimes. You can’t disappoint them. It was a challenge that I needed, and I really enjoyed.”

The end result was a character in Kay Hunter that isn’t a cliché detective. “I was determined not make another broken detective. I think there are too many of those around. I wanted to give her a normal home life. There is some personal tragedy. I wanted to give some light, and a sense of balance to the darkness in the story.” What’s more, Amphlett didn’t set-out to create an I-am-woman-hear-me-roar character either. She distinguishes Kay Hunter this way: “She is very resilient. She’s had everything thrown at her professionally and personally. She’s clawing her way back. I hesitate to use the word strong. I much prefer to use the word resilient because she’s had to rely on her wiles, more than strength, to claw her way back.”

Another clear sign that the Kay Hunter series could be where Amphlett breaks out is that instead of her creating the plots and characters, they came to her. “Once I started scribbling down the notes for this series, it just took off. During the span of June, when I was traveling Europe after CrimeFest, I pretty much had the first four books outlined.”

Perhaps part of Amphlett’s love of stories and storytelling feeds the part of her that is an admitted “travel junky.” One need look no further than her passport for proof of Amphlett’s love of the journey. In SCARED TO DEATH, Amphlett has created a new travel companion that has her excited about the future. “I can’t wait to see where it will take me.”

Originally from the UK and currently based in Brisbane, Australia, Rachel’s novels appeal to a worldwide audience.

SCARED TO DEATH is the first in a new series featuring Detective Kay Hunter, with the second in the series scheduled for publication in 2017.

Learn more about SCARED TO DEATH and the new Kay Hunter series, as well as Amphlett’s Dan Taylor series and other works on Rachel’s website.