According to thriller author David Baldacci, “A book isn’t finished until the reader reads or listens to it. I give them the template of what I think the story is, and they go and finish it off. It’s like I hand them a sculpture that is 85 percent complete and they finish the rest of it themselves.”

Likely, it’s this respect for the listener that drives the attention Baldacci gives to the production of his audiobooks, beginning with the selection of narrators. He auditions narrators to find the voices that reflect the characters—the voices he hears in his head—and the settings. Baldacci strongly believes in having a male narrator performing the male voices and a female for the women. He prefers a team approach. “It’s incredibly important to get the right people. I like having narrators who are not going to just read the book but are going to evoke it. I can’t do that just with the words. They can do that with their voices.”

For the Archer series, Baldacci sought a performer who could convincingly portray the pace, tone, and speaking style of the 1940s-1950s. He found it with Golden Voice Edoardo Ballerini, who is joined by Brittany Pressley. The third book in the Archer series, Dream Town, was released in April of this year.

His upcoming audiobook, The 6:30 Man, features a new protagonist, Travis Devine, whom Baldacci describes as a duck out of water—a military man who is now a junior analyst in a large, highly successful financial firm on Wall Street. “I needed the reader to relate to him—if not to love him, at least to root for him. I put into him what a lot of us have gone through. We find something we love, and then all of the sudden we can’t do it anymore. We have to find a second purpose in life. But Travis’s second life might mean life in prison.”

Baldacci’s penchant for strong female characters shines in The 6:20 Man. “The financial world is still a male-dominated world in which women have to work three times as hard to get to the same level. I wanted to show they can give as good as they get. It’s a gladiator experience.” Thus, Baldacci has given listeners several strong, smart women who can hold their own in this environment.

Listeners will be pleased to hear there is likely more in store for Devine. Baldacci says, “Devine is still trying to figure things out. I really want to bring him back. He’s an interesting guy.”

On writing in general, Baldacci shares how he doesn’t have to look far for ideas for his thrillers. He suggests that all you have to do is “follow the money to witness the weaponization of capital.” His thrillers are known for being layers of stories that all come together in the end. He likes to have lots of on-ramps and off-ramps that add depth to characters and complications to the stories without confusing the reader. “I don’t plot everything out. I don’t know everything that is going to happen when I sit down to write it. It sort of grows organically.” The characters speak to Baldacci. “We have good relationships. I think that’s important because what I’m trying to do is make them as real and authentic as possible. And, really, the only way to do that is to connect with them on a human level.”

Baldacci believes that audiobooks are important to literacy. “Reading is the greatest fundamental skill you can have. I equate the verb ‘to read’ with the verb ‘to think.’ You can’t have a free and open society if the majority of the population don’t read. Audiobooks are so convenient, and in our hectic world, they’re a terrific way to get people into reading.”

Fair warning: Our audiobook selections for August are mysteries and thrillers you won’t want to stop listening to once you start. We’re featuring new chapters in long-running favorite series, such as Kathy Reichs’s Temperance Brennan thrillers, and new standouts, including Rebecca Zanetti’s latest romantic suspense. Read on to find your next excellent, and unpausable, audiobook to enjoy. 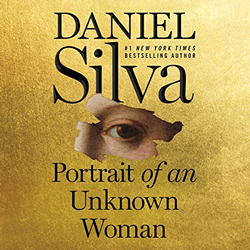 PORTRAIT OF AN UNKNOWN WOMAN

Narrator Edoardo Ballerini returns to perform the 22nd addition to the Gabriel Allon series. The retired legendary spymaster Allon is now enjoying family life in Venice. Then Allon investigates the mystery behind a supposed masterpiece and is drawn into the dark, lucrative side of the art world. Ballerini demonstrates his talent for accents as Allon’s adventures take him through Europe and to the US. He skillfully voices Allon’s talented and seductive female partners and adversaries. Fans will find that Silva’s storytelling paired with Ballerini’s performance makes for a wonderful listening experience. 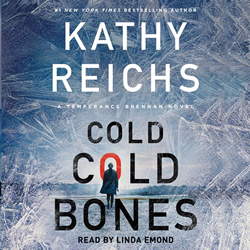 Narrator Linda Emond is terrific in the latest Temperance Brennan audiobook, and the characters remain compelling. Brennan, a forensic anthropologist in North Carolina, has a sense of humor, and Emond captures it nicely. She clearly voices conversations between Brennan and her PTSD-afflicted daughter, Katy. Her performance as Detective Erskine “Skinny” Slidell, a tough cop and Brennan antagonist, carries the right amount of crankiness. The story begins with a human eyeball having been delivered to Brennan’s house, which is followed by copycat elements of earlier Brennan cases. 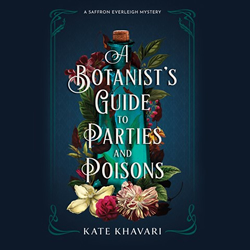 A BOTANIST’S GUIDE TO PARTIES AND POISONS

Jodie Harris’s comfortable pacing and British accent bring a strong sense of time, place, and character to Kate Khavari’s new series. Botanist Saffron Everleigh has an eager tone as she embarks on her new job at University College London in 1923. When the wife of a professor is poisoned at a party and Saffron’s mentor is arrested, she must use her skills to investigate. Harris provides hints of anger and impatience as Saffron deals with sexism at work and condescension from the police. Dr. Maxwell’s respect, Dr. Berking’s arrogance, and Ashton’s support add intrigue as listeners root for Saffron to stop the murderer before she herself becomes the next victim. 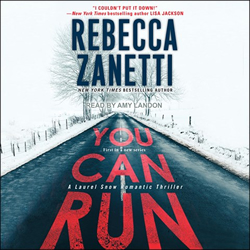 YOU CAN RUN: Laurel Snow, Book 1

Zanetti’s taut writing and Amy Landon’s stellar narration create a cinematic listen for fans of serial murder mysteries. In this series starter, FBI Profiler Laurel Snow returns to her hometown in Washington state to investigate a cluster of bodies discovered in the wilderness. The many action scenes are adroitly voiced with high tension and quick pacing. Landon’s nuance as a performer is highlighted whenever she portrays the emotionally unavailable investigator, Huck Rivers, who guides Laurel through the crime scenes. Landon makes the romantic scenes sizzle. Once Laurel is targeted personally, listeners will have a hard time pausing until the killer is revealed. 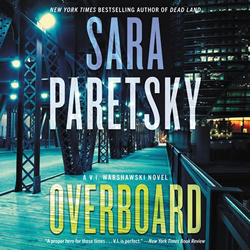 The talented and emotive Susan Ericksen continues as narrator for Book 22 in the V.I. Warshawski detective series. Ericksen’s familiarity with the indomitable investigator’s inflections and emotions produces a thrilling realistic performance. Warshawski is drawn into a new investigation upon finding a burned girl hiding in the woods. When the teen disappears from the hospital, Ericksen’s delivery embodies Warshawski’s determination to discover what happened. Ericksen excels during tense verbal exchanges among the novel’s diverse characters. Listeners will be glued to their earbuds until Warshawski unspools every thread tied to the injured and missing girl.