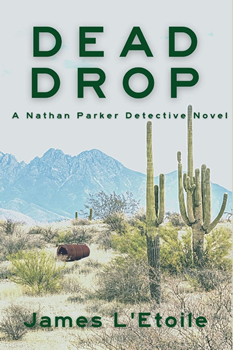 The hot streets of the desert Southwest come to searing, dusty life in James L’Etoile’s new series starring Maricopa County Detective Nathan Parker. The series launched in July with DEAD DROP, L’Etoile’s fifth published novel and the story of the search for the ruthless killers of undocumented migrants.

When Nathan finds the bodies, he is aghast at the gruesome murders, even as he continues his long search for answers in the cold case killing of his partner. Twisty clues lure Nathan from Phoenix to Hermosillo, Mexico, the seat of human trafficking by one of the world’s worst cartels, while his police colleagues do everything they can to thwart him. Soon he is trapped in an unforgiving land. He must depend on those he once pursued, but there’s no guarantee he’ll make it out alive.

“DEAD DROP is not a migrant’s tale, and that’s not my story to tell,” L’Etoile says. “The situations I’ve observed, the accounts from people caught in the human trafficking networks, and the lengths people have gone through to make a better life all gave me the underpinnings of DEAD DROP.”

Before writing full time, L’Etoile worked in the California prison system for 29 years. “The initial inspiration for the story occurred years ago. I was at a prison south of San Diego, close to the international border—you could see the wall from the prison yard,” he says. “The undocumented would use the hills and mountains near the prison to travel north, avoiding the Border Patrol checkpoints. The prison had a problem with its count. Managing a prison starts with one primary mission—knowing how many inmates you are supposed to have and account for every single one. At the time of my visit, the prison’s minimum facility count didn’t ‘clear.’ The number of inmates in bunks didn’t match the number they were supposed to have. After a series of recounts and identifying each inmate by photo, they found the problem. An undocumented migrant had snuck into the prison’s minimum facility for a place to sleep and a hot meal. It made me think about the grueling journey over the border and how breaking into prison would be this man’s best choice.”

Although he’s always loved to read, L’Etoile didn’t have the time or energy to write during his career in prison management. “A good day was when you didn’t have any extra holes in your stab-resistant vest when you left.”

After retirement, however, his outlook changed. “I thought about one of the first criminal justice assignments when I was a probation officer preparing pre-sentencing reports for the presiding judges,” he says. “I would interview the convicted person in the jail, talk with the investigating officers, read all the reports, and speak with the victims to get the sense of the impact of the crime. I would cobble all of that together into a narrative for the judge with a recommended sentence. It occurred to me that what I was really doing was writing crime stories. I knew how to do this!”

And thus, a thriller writer was born. “Like most authors, I think I have two manuscripts sitting in a bottom drawer,” he says. “It took a bit of time to find my voice and learn more about the craft before I published my first novel.”

He had plenty of help. “Emma and Bryn (my corgis) play an important part in my writing process, or so they would have me believe,” he says. “We start the workday with a walk where I’m able to think about the scene, or characters I’m going to write, and the corgis make sure I keep focused. They would prefer a ‘treat-driven’ story, so I must keep that in mind.”

Then there’s #NotMyCat, a favorite on L’Etoile’s Facebook page. “A few years ago, she simply showed up in the upstairs guestroom, sleeping on the bed, and she’s never left,” he says. “She can be ill-tempered, will bite on occasion, and has a look that will wither the sturdiest of souls. But, when she chooses, she can be kinda sweet. She meets me every morning for coffee and keeps me company while I write. This may be Stockholm syndrome talking, I’m not sure anymore.”

L’Etoile’s stories have the ring of authenticity. “I can’t help but use some of the unique characters and situations I experienced. When you live with convicts for years at a time, you get a real understanding of who they are and how they ended up where they did. My challenge is to give the reader just enough details to give texture and tone to the story.”

To research DEAD DROP, L’Etoile interviewed contacts in Immigration and Customs Enforcement, as well as undocumented persons and the employers who hire them “with a wink and a nod,” he says.

He starts with a character and a “what if.” For DEAD DROP, he says, “The ‘what-if’ was WHAT would happen IF a detective with deeply entrenched feelings about the undocumented community was put in a position where he needed to rely on the very people he once pursued to keep him alive? That story kernel changed over time, but Nathan Parker doesn’t hold anti-immigrant views in spite of what happened to his partner. He recognizes they are caught in a broken system.”

L’Etoile is neither a plotter nor a pantser. “I sketch out the key scenes with just enough detail to give me a road map. I once outlined a teleplay script on a Starbuck’s napkin.”

When he has the character, the writing begins, six days a week. “I can’t help but infuse my characters with bits and pieces of people I’ve come across, both in and out of prison. I do try to make them people readers can invest in and want to know how their story unfolds. How a character reacts to a situation within the story reveals so much about them—what do they want and how far are they willing to go to get it?

“To get the characters right, I spend a lot of time getting to know them before I start the manuscript. I’ve gone as far as writing a short story in first person POV to get the voice, dialogue, and tone true to that character.”

His new protagonist, Nathan, is a tortured soul. “I don’t think it’s a spoiler to reveal some of what drives Nathan since it’s in the first chapter or two. Nathan and his partner, Deputy McMillan, were on an immigration checkpoint in a remote desert when a human smuggler approached McMillan’s end of the roadblock. The coyote murdered McMillan and left him to die in the desert. Nathan has never forgiven himself for losing his partner. Complete with all the self-incrimination that goes along with it—‘It should have been me,’ ‘What could I have done to save him?’ The survivor’s guilt tore apart his relationships, and his path to redemption means finding justice for his partner and bringing down the killer.”

Another character, the secretive Billie, is drawn from the hardscrabble desert. “During a trip to Phoenix, I spotted a guy living off the grid in the middle of what seemed like an inhospitable patch of desert,” L’Etoile says. “I thought what would make someone want to set up camp in a remote, unpopulated place. My imagination took it from there.”

The seamy side of Phoenix is also a character. “Phoenix is the fifth largest city in the country, yet the social stratification is stark from one neighborhood to the next. La Mirage and The Guad are two communities where the undocumented congregate and seek the comfort and protection from their own. The county had a reputation for hardline anti-immigrant sentiment, and the sheriff built Tent City to house inmates in the hot Arizona sun. With these as a backdrop, it made sense to set DEAD DROP in the Phoenix area.”

What’s next for Nathan and Billie? “Since I’ve just finished the draft of the second book, I can tell you it involves old wounds, hidden pasts, and the price of redemption.”