An Eye on Revenge 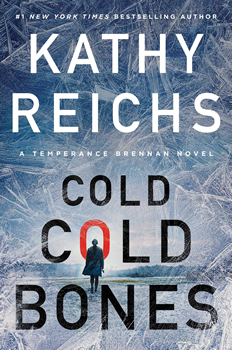 Soon after the famed forensic anthropologist makes the macabre discovery of a human eyeball left in a box on her porch, it leads her to a series of shocking murders that seem to be recreating crimes that Brennan has investigated from her own past. Someone is clearly targeting her for some sick reason—but who and why?

“There seems no pattern to these random cases,” Reichs says. “Yet Tempe’s anxiety deepens. Why? Are the victims linked? Then realization. Each death mimics a killing that she has witnessed, analyzed, or barely escaped earlier in her career.

“At its core, COLD, COLD BONES is about revenge. And the lasting damage caused by violence, trauma, and loss.”

Then suddenly Brennan’s own daughter—who has recently returned to civilian life after two stints in the Army—mysteriously disappears too, raising the stakes even higher for her in this baffling case. 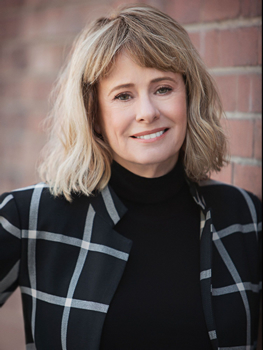 Reichs shares insight about how the complex storyline in COLD, COLD BONES—involving multiple cases from past Temperance Brennan books—required a great deal of thought and effort on her part.

“I knew I had to be careful,” she says. “I began writing fiction in 1994.  Déjà Dead, the first Bones book, was released in 1997. COLD, COLD BONES, the 21st entry in the series, is coming out in 2022.  That’s a lot of years, a lot of characters, a lot of stories, a lot of details.  Readers of forensic thrillers are very astute.  If an author makes a mistake, rest assured they’ll catch it.

“When I decided to use a theme involving the revisiting of old stories, I knew I had to be careful.  If the lady’s eyes were green in Devil Bones, they’d better be green in this book, too.  Therefore, I spent endless hours researching myself, checking the very facts and minutiae that I’d created!”

For many readers, of course, Temperance (Tempe) Brennan is a familiar character—not just from Reich’s bestselling books but also from the long running TV show Bones that was inspired by the novels.

Why does Reichs, a prominent forensic anthropologist herself in real life, think Tempe has become so popular with fans? 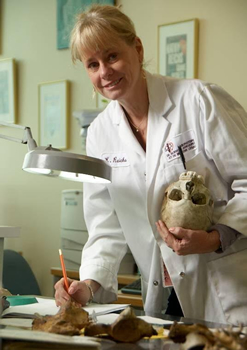 “She’s an appealing character—globally,” she says. “She’s sold in something like 39 languages, and the TV show was available in more than 100 foreign territories. I’ve created a formidable character, but another factor is the global appeal of crime-inspired books, movies and TV shows. For every CSI that ends, another media darling makes an appearance—and that has been both a blessing and a curse.

“In many ways, ‘television’ Tempe is quite different from ‘book’ Tempe. In the writers’ room, I did learn that the way I construct a novel parallels the way one constructs a screenplay. There is your main story, the mystery. In addition, there is your secondary story involving happenings in the lives or your characters.

“The big difference between writing for the screen and writing for the page is that a teleplay largely boils down to dialogue. Lengthy descriptions of characters and settings are unnecessary since viewers see those details with their own eyes.”

She also points out that fictional forensic anthropologist Tempe doesn’t always operate exactly the same way that Reichs herself might on a crime case job.

“The actual cases where I would be working on these kinds of cases, I would try and maintain more of a distance. One of the things that is enjoyable in writing is you get very involved, and of course my heroine gets much more involved in the actual detective work than I do.”

How did Reichs go from being a forensic anthropologist in real life to writing bestselling books about a fictional one? 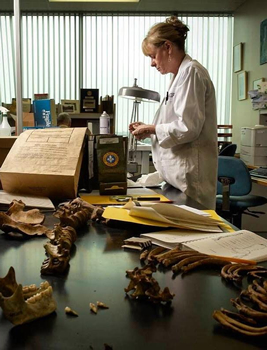 Reichs in her laboratory

“Déjà Dead (1997) is based on my first serial murder investigation,” she says. “I was on faculty as a visiting professor at McGill and Concordia Universities and consulting at Le Laboratoire de Sciences Judiciaires et de Médecin Légal in Montreal when I was asked to help with a series of grisly killings.

“By examining the first victim’s bones, I was able to determine that the person who’d dismembered her had knowledge of anatomy and was skilled at cutting up a body. I suspected the perp had some sort of training in dissection and testified to this finding at his trial. The accused, who was convicted, turned out to have been a butcher.

“I felt readers might enjoy a thriller in which forensic methodology was a driving force. Thus, Temperance Brennan was born.

“I write for those who want to learn what’s new in the morgue and the crime lab, be it in the field of forensic anthropology, DNA, ballistics, or blood spatter pattern analysis. I know my readers appreciate a good old-fashioned murder mystery with a galloping plot. But I believe they are also fascinated by investigations whose solutions are informed by science.”

Besides writing the Temperance Brennan books, Reichs is also busy in many other areas—working in the medical world as an advisor, testifying as an expert in court cases, and even writing young adult books with her son. 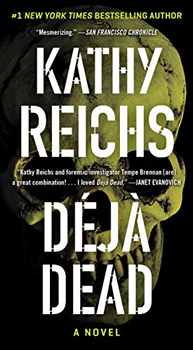 “I love the fact that I have had so many jobs,” she says. “Bio-archaeologist. University professor. Writer. TV producer. I love the variety of hats I have been able to wear, the diversity of work experiences I have enjoyed. As an author alone, I was able to shift between penning Temperance Brennan novels, working on Bones screenplays, and writing books in the young adult Virals series with my son, Brendan. Throw in a bit of forensic work, a lecture here and there, and things never get dull.”

So what’s next for her?

“I am currently working on the 22nd Temperance Brennan novel, The Bone Hacker,” she says. “The story opens in Montreal with Tempe and Ryan caught in a small boat in a violent storm while watching a fireworks display. The following day, Tempe is asked to recover the remains of a man struck by lightning and knocked from a bridge into the St. Lawrence River.

“What she discovers does not tally with eyewitness accounts of the man’s death.

“When the man is identified as a foreign national, a detective from the Royal Turks and Caicos Islands Police Force flies to Montreal to persuade Tempe to travel with her to Providenciales to help with a series of disappearances and murders involving young men visiting as tourists. Reluctantly, Tempe agrees. What she uncovers in the island paradise poses greater personal threat and has far broader global ramifications than she could have imagined.”