Features, Latest Books, Up Close
1 week ago
by Dawn Ius
0

Grappling with a Moral Dilemma 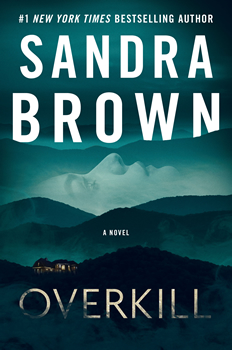 New York Times bestselling author Sandra Brown isn’t afraid to admit she wrote Blind Tiger—last year’s historical story of romantic suspense, set in the 1920s—partially to avoid dealing with the pandemic. As COVID continued to sweep across the globe, Brown says she wasn’t quite sure how she wanted that “present day” reality to show up in her novels. So instead, she went back in time.

Ironically, it’s COVID that brought her back to the present with the release of this month’s OVERKILL, Brown’s 84th novel in what has been a staggeringly successful career. Brown says the story was inspired by one of the most upsetting consequences of the pandemic—the impossible decision of whether to take a loved one off life support.

“So many people were having to decide whether to take someone—a loved one whose fate was already pretty much sealed—off of support and give a respirator to someone who likely stood a chance of survival,” she says. “Such an awful decision to make, and I couldn’t help thinking about the horror of having to go through all of that.”

Which then led to Brown considering what she would do in a similar situation—and finally, of course, to what one of her characters would do. Specifically, former Super Bowl MVP quarterback Zach Bridger.

Zach hasn’t seen his socialite ex-wife Rebecca in years, not since their volatile marriage imploded in a very public way. So it comes as a shock when he hears she’s been put on life support after a violent attack and he, despite their divorce, has medical power of attorney. When faced with the terrible choice of having to take her off support or keep her alive, if only in “body,” he buckles under the pressure of being in the public eye and leaves the choice up to Rebecca’s parents. They choose to keep her alive.

“I wrote this at the time Tom Brady was thinking about retiring from the NFL and it seemed like the whole world was watching him—and his wife, his ex-wife, and his kids—as he had to make this life-altering decision,” Brown says. “I thought about how hard that must have been. And so I wanted to make Zach, this former NFL star, have a really hard moral decision to make and then torture him a little by having it be so public.”

Torture him Brown does. Fast forward four years and we meet Eban—Rebecca’s attacker—as he is granted early release from prison. The decision doesn’t sit well with Kate Lennon, a brilliant state prosecutor, who is determined to bring the wealthy criminal to true justice. But to do so, Rebecca’s circumstances would have to change. If she were to die, for instance, Eban could be retried on a new charge: murder.

“I haven’t written a book like this in a long time,” Brown admits. “It’s a risk because it’s a difficult dilemma for anyone to face, and maybe to read about. But my view is that the reader should feel a little uncomfortable sometimes. I wanted the reader to worry about what Zach would do, the decision he would make, because it’s not simple. It’s a touchy situation, and I wanted to present both sides fairly.”

That complication wasn’t the only one. OVERKILL is a Sandra Brown novel—sexy and suspenseful is her famous tagline, and she lives up to it—so it wouldn’t be complete without a smoldering romance woven in. That comes in the form of Kate and Zach, who are forced to navigate their growing feelings for each other, without being insensitive to the circumstances of their perhaps questionable romance, and all while under very public scrutiny.

“One of the tricky things about this book was that I wanted to make sure Kate was a sympathetic character, because she’s basically going to Zach and saying, ‘You need to do this,’ and I couldn’t make Zach look like a jerk even though Rebecca is his ex-wife, and there was certainly no love lost between them,” Brown says. “I had to walk a thin line.”

A less seasoned pro may not have pulled it off—but Brown does, turning up the heat and the suspense in what may be one of her most compelling novels yet. The chemistry between Kate and Zach is off the charts. But adding to that tension is Eban, a truly repulsive man who forms one of the antagonist trios Zach must face—his ex, her attacker, and his own conscience.

“I really heaped it on this poor guy,” Brown says.

As per her usual process, Brown wrote herself into a corner with OVERKILL, and after curling up in the fetal position for a bit—a tried and true part of her creative process—Brown did what she does best: She let her characters work it out.

“I know that sounds crazy, but I get stuck on a plot point or something, and I think, ‘What would a normal person do in this situation?’ But these characters are not normal people,” she says. “They’re exceptional. Sometimes it’s like pulling teeth, but they always find their way to the end.”

In the case of OVERKILL, it’s more than a satisfying finale—and one that even Brown didn’t see coming.

For her next book, Brown has only begun the “thinking” process. She admits she’s a little behind schedule, but “life” has taken over in the past few months. In addition to moving, Brown is renovating her new house, and as recently as last month is recovering from…yes, COVID.

While only a mild case, it would seem the pandemic isn’t quite done messing with Brown’s writing. Thankfully she remains a formidable force to be reckoned with.