Features, Latest Books, Up Close
1 month ago
by Dawn Ius
0

Not So Wedded Bliss 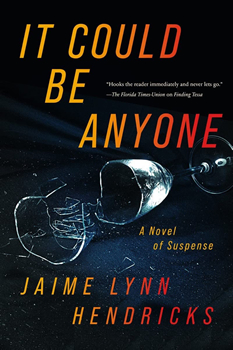 Murder happens quickly in Jaime Lynn Hendricks’s sophomore thriller, IT COULD BE ANYONE.

Halfway through the first page, a groom is murdered. Soon thereafter, you meet his would-be bride and their friends—and you realize each of them has a secret, a secret that could make each of them a suspect in his grisly death.

But as the clock rewinds to two days before the murder, it’s clear the groom wasn’t an innocent bystander. He had a reason for needing this wedding to go through and was prepared to stop at nothing to make sure the “happy couple” made it all the way to the alter.

A pulse-pounding story set at a glitzy destination wedding, IT COULD BE ANYONE is the type of well-paced book that keeps you turning pages well past your internal “one more chapter” promise. Turns out, that’s exactly the way Hendricks planned it.

In this interview with The Big Thrill, Hendricks delves more into her process, her inspiration, and why she prefers to write about morally gray characters.

IT COULD BE ANYONE takes place during a destination wedding—which is refreshing given that for two years, no one was able to travel. Did the pandemic impact how you wrote this book? Were you worried the “unable to travel” part of real life would be a hindrance, or did you think it would create a (much needed) escape from reality?

I wrote this book in early 2019, when traveling was still a part of regular day-to-day life. People thought nothing of booking a flight and going somewhere for a weekend wedding. What ended up being my debut, Finding Tessa, actually sold in summer of 2020 when the world was officially stopped. I think IT COULD BE ANYONE came out at just the right time—while some people still can’t/won’t travel no matter what, a lot of stuff is starting to go back to “normal”—whatever that is! Personally, if I never read details in fiction about all the restrictions over the last few years, I’d be fine with that. Escape from reality for sure.

Your murder happens on the first page—and it’s the groom. In terms of writing process, are you a plotter or pantser? Did you write the first page and move in a linear fashion?

One hundred percent pantser! I knew I wanted to start the book with a bang to hook the reader, so I killed the groom halfway through Page 1 and then let the reader know that the killer was hiding something. Through each of the subsequent POVs, I let the reader know they were ALL hiding something. I had no idea what those secrets were. As I got to know each of my characters, I made their secrets something that would be devastating to their current life—what were they most afraid to lose?—and that came with getting to know them first. So for this one, I wrote linear. I had no idea who the killer was until the final pages! But it fit.

There are numerous secrets in this book—the characters all have motive and means. Was it tough keeping all of those “suspects” and “secrets” separate? Was there one character more difficult to write? Easier?

I feel like I did a decent job of distinguishing their voices—we have the happily married couple, the playboy, the good guy, and the rich divorcee. For me, and hopefully the reader, it was easy to keep them separate. I had so much fun writing this book about misbehaving people that I didn’t find any of it to be difficult. My favorite to write was Emma. Without giving too much away, while everyone else seemed to have regret about what they did in the past and changed their lives for the better, she double-downed. Then triple-downed. Lie after lie after lie. I love morally gray characters.

The book takes place over a short period of time—two days! How did that “ticking time bomb” help you to propel the story?

I think that was such a huge help. It was my editor’s suggestion to basically time and date stamp each chapter heading. From Chapter One, you know the groom gets killed on the wedding day at 7 p.m. With it going back to two days before the wedding and having it unfold hour by hour, I hoped to keep the reader on the edge of their seat, knowing when it was coming. The why is known by the time he’s murdered, because by then the reader knows everyone’s secret. But the who and how come out later, no matter what you think you know.

IT COULD BE ANYONE is fast paced! The Big Thrill is as much for aspiring writers as it is thriller readers. What advice would you give for nailing that pacing? Why are you drawn to shorter spans of time? (Finding Tessa takes place over six days or so, right?)

Yes, Finding Tessa’s main story was about six days. I like shorter spans because as you mentioned above, it’s the ticking time bomb. That’s also why I like writing short chapters—the shorter they are, the easier it is for the reader to say, “Just one more chapter,” and that’s all any author wants. One more chapter and before you know it, it’s been read in one sitting. Ninety-five percent of my third book takes place over eight hours!

The story is set in Miami—and I love how you bring the setting to life. Feels like you have some experience with the area. What elements did you want to capture, and why was this the best setting for this book?

I live in Florida part time, but on the west coast. However, I’ve been to Miami at least 30 times, maybe more—the perils of being a Dolphins fan! Where I live in Tierra Verde, everything is chill and slower, and people can wear flip flops 24/7. I felt like these characters needed to be in Miami. They were flashy New Yorkers and needed the glitz and glamor around them. Plus, Trevor, our sleazeball groom, wouldn’t be caught dead in a city that wasn’t luxurious (see what I did there? Ha). With bright lights and fancy hotels and opulence, it was like New York South. The heat wave I put them in tested tempers as well.

IT COULD BE ANYONE is your second published book—but you wrote it before your debut, Finding Tessa, which did very well. You avoided the often tricky “sophomore book” blues—but I’m sure there were still challenges in doing the revising. How did you overcome those?

Revising was tougher on this one. As all authors know, we get better with each book, so in a lot of ways, it was a worse book than Finding Tessa, writing-wise. When my edit letter came for IT COULD BE ANYONE, there was so much more to do. I feel like a lot of writers go through the same thing. When our debut sells, it’s because the editor pretty much likes it as is, with changes to come, of course. When they’re presented with a second book, it’s one that fell into their lap because of a contract, not one that was personally chosen out of the slush. So edits are harder and much more detailed.

What books might I find in your nightstand? What’s ready to go on your streaming platform of choice?

Thrillers, thrillers, and more thrillers! My TBR includes the latest releases by May Cobb, Elle Cosimano, and the upcoming Darby Kane. I recently finished Hello, Transcriber by Hannah Morrissey and The Island by Adrian McKinty and highly recommend both. As for streaming…I haven’t started the Stranger Things newest season yet, but it’s side-eyeing me! I rewatch House M.D. (this show is brilliant) and Schitt’s Creek (David Rose, need I say more?) obsessively.

If you’re a thriller author or have been to Thrillerfest, this one is for you. I Didn’t Do It comes out late spring 2023 and revolves around the death of a prominent thriller author, who is found dead in her hotel room at a national thriller conference in NYC. Sound familiar? Then four other authors start receiving threats, find out they all have a secret connected to the dead writer, and realize they are living in a thriller novel themselves as they try to piece together what’s happening. It’s a terrific parody of everything that happens in the industry. With murder, of course.