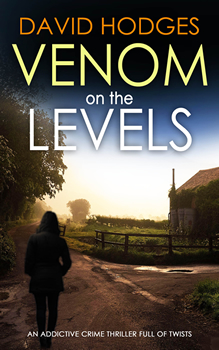 The world’s deadliest spider. A detective terrified of the creatures. A ruthless psychopath who will use her fears against her.

Detective Kate is called out to a reported theft at Moat House in the marshy wilds of the Somerset Levels. The evidence points to a random break-in by a passing vagrant—but when she questions the wealthy homeowner, Professor Dunbar, and his warring family, Kate realizes there’s more to this burglary than meets the eye.

Then a family member is found dying in agony in the professor’s laboratory. It appears to be a tragic accident when it’s discovered Martha has escaped from her supposedly secure tank. But Kate is not so sure.

Could there be a killer on the loose?

Kate is terrified of spiders because of a traumatic childhood experience. But she’s hunting a killer who uses the creatures to pursue a deadly agenda. Can she survive long enough to unmask a murderer . . . and avoid the spider’s lethal bite?

Author and former police superintendent David Hodges sat down with The Big Thrill to discuss his latest crime thriller, and the tenth installment of the Detective Kate Hamblin Mystery series, VENOM ON THE LEVELS:

Primarily satisfaction from an absorbing page-turning read with an edge to it that makes them check the doors and windows are closed.

As an ex-policeman, it was an inevitable choice on the basis of ‘write what you know,’ but I have been drawn to crime fiction ever since childhood, simply because it is a form of escapism where anything can happen and frequently does, and you are kept on the edge of your seat until the end. No other genre provides me with that sort of fulfillment.

Essentially to provide a crime thriller where some poetic license enables me to get away from the tried and tested police procedural and concentrate on plot, pace, and characterisation rather than heavy technical fact. For me, the read is the important thing, and I want my readers to go away afterwards thinking, ‘I really enjoyed that,’ not ‘That guy certainly knows his forensics!’

The exact locations in which scenarios in my novels are set. I may choose an old house, a farm, even a boat, and it will be an actual place to ensure my descriptions are accurate and consistent throughout. I want my readers to feel they could have been there.

Sax Rohmer, Conan Doyle, and Sapper in the ‘vintage’ era because of the atmosphere they create and the eras (particularly that of Conan Doyle) that I find so fascinating. In later years, I have got to know and enjoy Lee Child, Ian Rankin and Jo Nesbo because of their pace, characterisation, and the thrill of the read, which carries the reader with it.

Are the central characters believable to the reader?

I feel they are as in the main, they are based on composites of people I know or have worked with or are drawn from the notables in the world around me. I take immense care in attaching as much accuracy and consistency to my character types so that they ‘live’ in my mind as real people.

David Hodges is a former police superintendent with thirty years’ service. Since ‘turning to crime,’ he has received critical media acclaim, including a welcome accolade from Inspector Morse’s creator, the late great Colin Dexter, and he is now a prolific novelist with sixteen published crime novels and an autobiography on his police career to his credit. He has written a number of standalone thrillers, and his Somerset Levels Murder Series, published by Joffe Books, which features feisty young detective sergeant Kate Lewis and her laidback partner, Hayden, has attracted a particularly strong following, not only throughout the UK, but also in Europe, Australia, and the United States and Canada. His latest novel in the series, VENOM ON THE LEVELS, will be published on 28 April 2022 and is currently available for pre-order on Amazon.

David has two married daughters and four grandchildren and lives in the UK with his wife, Elizabeth, where he continues to indulge his passion for thriller writing and pursue his keen interest in the countryside.

The Pull by Glenn A. Bruce