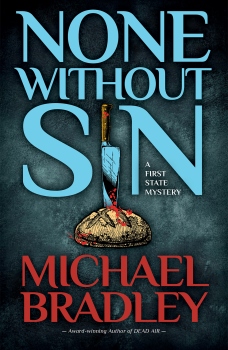 When a Delaware real estate mogul is murdered, newspaper journalist Brian Wilder wants the scoop on the killing, including the meaning behind the mysterious loaf of bread left with the corpse. Reverend Candice Miller, called to minister to the grieving family, quickly realizes that the killer has adopted the symbolism of sin eating, a Victorian-era religious ritual, as a calling card. Is it the work of a religious fanatic set to punish people for their missteps or something even more sinister?

As more victims fall, Brian and Candice follow a trail of deceit and blackmail, hoping to discover the identity of the killer—and praying that their own sins won’t catch the killer’s attention.

Michael Bradley recently spent some time with The Big Thrill discussing his latest thriller, NONE WITHOUT SIN:

I prefer to set my book in fictionalized versions of real places. I guess that means the setting came first. The events in NONE WITHOUT SIN take place in Newark, Delaware, with many of the street names and landmarks remaining true to real life in the book. Of course, the business names have been changed, but much of the layout of the fictional city matches the real one.

I was surprised by how some of the characters took on a life of their own as I wrote the book. My male protagonist, Brian Wilder, was a character that I had firmly developed in my mind over several years, but my female protagonist, Candice Miller, was a new entity to me. There was a lot of discovery about who she was as I wrote. The Candice Miller I started with is definitely not the Candice Miller I ended with. The secondary characters, as well, became far more than I expected. They developed into characters who, in the future, could stand alone in their own books.

Michael Bradley was born and raised in New Jersey, a fact he hopes no one will hold against him. He spent eight years as a radio DJ “on the air” before realizing he needed a real job and turned to IT. Never one to waste an experience, he uses his familiarity with life on the radio for many of his suspense novels, among them his first, the supernatural thriller Sirens in the Night (2015), a “smart, terrifying, heartbreaking” and “compelling read,” and his third, the award-winning thriller Dead Air (2020), a “phenomenal read” that will “make you look over your shoulder the moment night falls.”