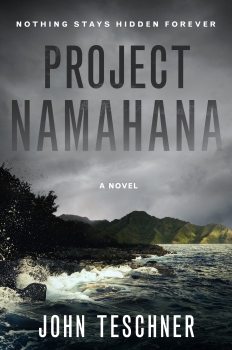 After a tainted military discharge, Micah Bernt moves to a remote Hawaiian island looking for peace. But when his landlord drowns under mysterious circumstances, Bernt suspects someone may be killing workers doing secretive biotech research high on the slopes of Namahana mountain.

As the killer works his way up the chain of command, Michael Lindstrom—the executive in charge—finds himself in a corporate power struggle over a controversial chemical that could launch the next agricultural revolution.

To save more lives and solve the mystery, the ex-scientist and the ex-soldier must head into the mountains to confront a killer.

This is hard to say! One morning, after I’d been living on Kauai a few years, I woke up at 4 a.m. from a vivid dream/nightmare that had the cinematic feel of an action thriller. I decided this would be my next writing project. It was a genre I’d never attempted. I knew immediately I would set it in Hawaii, incorporating details of everyday life and culture that most visitors, and a lot of residents, never see.

Another inspiration for this novel was an article in the New York Times magazine by Nathaniel Rich. It was about Dupont dumping toxins into West Virginia streams, poisoning people and animals. I wanted to try and understand the mindset of people like these corporate executives who consider themselves good people while making decisions that will result in poisoning others. The mystery/thriller genre gave me a way of doing that while still entertaining readers and hopefully having a wider audience. I also hope it helps me avoid the trap of singing to the choir. So often, we seem to self-select as readers and media consumers, so that we rarely confront research or opinions we don’t already agree with. Although I’m generally on the side of criticizing companies that are creating pollution, I wanted to offer a more nuanced picture and challenge everyone who thinks these are always black and white moral issues. A murder mystery gives you the chance to transform those nuances into narrative decisions that are integral to the plot and to the enjoyment of solving the puzzle, rather than just slabbing my opinions in there for their own sake.

The biggest challenge was writing a novel! I’ve read thousands, but when it came to creating my own, I felt like I was starting from zero. One mistake I made was being so daunted by the length of a novel, I felt compelled to add scenes and plotlines out of fear there wouldn’t be enough there. It ended up being about twice as long as I needed it to be. Fortunately, my agent Kirby Kim and my editor Robert Davis were both fantastic at helping me understand what I needed to be doing and compressing it significantly. Paradoxically, making the novel half as long allowed me to say more because the themes and ideas I really cared about were much more prominent.

Literally millions of people visit Hawaii every year, but I venture to say that few will find anything familiar in here except for the landscapes. The tourism industry on Hawaii has been so successful, the unique culture of the island itself is almost completely hidden by the stereotypes and the carefully managed visitor experience.

John Teschner was born in Rhode Island and grew up in southern Virginia. He has worked as a newspaper reporter, professional mover, teacher, and nonprofit grant writer. He served as a Peace Corps Volunteer in Kenya and rode a bike across the United States. He spent seven years living on the island of Kaua’i with his wife and two boys, where he helped lead Hui O Mana Ka Pu’uwai outrigger canoe club and became a competitive canoe racer. He now lives in Duluth, Minnesota, where he is learning how to stay upright on cross-country skis. PROJECT NAMAHANA is his first novel.