Fitting-In Has Never Been So Deadly 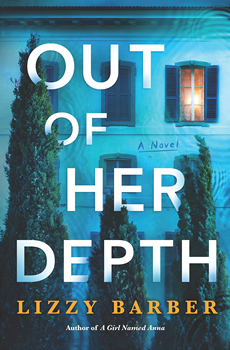 “Before you judge me, remember this: a girl died, but it wasn’t my fault.”

So begins the tantalizing narrative in award-winning author Lizzy Barber’s newest domestic thriller, OUT OF HER DEPTH.

London resident Rachel Bailey has always been middle-class. She’s a 40-ish French and Italian language teacher at an exclusive all-girls private school in London. But that summer before college showed her another side of life—one filled with luxury and privilege.

Over 20 years before, when teen Rachel arrives at the posh Villa Medici in Florence, Italy, she can’t believe she’ll be spending four months there, doing light housekeeping for the stay of a lifetime. She doesn’t realize that what happens that summer will damage her life forever.

Upon her arrival at the villa, Rachel meets charismatic Diana, another girl working there for the summer. It thrills Rachel to be in Diana’s orbit. She’s beautiful and self-confident. And wealthy. When Rachel meets Sebastian—a young man summering in Florence who shares Diana’s experience of getting what he wants, when he wants it—she can’t help but fall for him. But when he chooses someone else, Diana is more than happy to join forces with Rachel to make him pay.

And a girl ends up dead.

Now, 21 years later, Rachel and Sebastian have suffered from what happened that summer, but Diana leads a glamorous and entitled life. It’s not fair that she escaped the trauma that forever changed the shape of Rachel’s and Sebastian’s lives. Diana consumes Rachel. It’s a “demon inside her demanding to be fed.” But can she get Diana to admit what she did all those years ago?

Written in first person from Rachel’s perspective with chapters alternating between “now” and “then,” readers experience Rachel’s yearning to be one of the “in” crowd and her knowledge that she will forever be on the outside looking in.

Here, Barber talks with The Big Thrill about her motivations, how setting informs the story, and the disparity between the “haves” and “have-nots.”

What was your inspiration for OUT OF HER DEPTH?

The inspiration came from a few different sources. I lived in Florence when I was 18 and have returned yearly. I’ve always thought it would make an excellent setting for a thriller because of its duality: It is so beautiful and yet so dark; the home of Renaissance art, but also the devious Medicis and Dante; the beating heart of the “dolce vita,” and also the home of a real-life serial killer: The Monster of Florence.

I was also in Florence around the time Amanda Knox and Meredith Kercher were in Perugia, so I was drawn to the parallels of my own experiences: What would have happened if my perfect experience had gone horribly wrong?

I owe an enormous debt to Patricia Highsmith’s The Talented Mr. Ripley. I loved the idea of a voyeur-as-narrator; a fish-out-of-water character who is thrust into a glamourous world which is beyond their wildest imaginations, and how that propels them to make terrible choices. But I wanted to explore Ripley and Dickie’s relationship through a female lens, to explore the toxicity of female friendships.

How did you use your multiple trips to Florence inform the novel? What from that first trip when you were 18 made it into the story?

Although OUT OF HER DEPTH is a thriller, it is also a love letter to Florence. Setting and atmosphere are always important to my writing, but knowing Florence as well as I do gives it a deeply rooted sense of place. I wanted it to be a full sensory experience for the reader: stepping out of a sunlit piazza onto a dark, cobbled artery; the particular flora and fauna in the Fiesole; the taste of a pistachio and ricotta ice cream. These are more than just the nuts and bolts of the location—the intrinsic sense memory of being there that (I hope) provides a three-dimensional backdrop to the plot.

Regarding that first trip, what I experienced, and what Rachel’s experience mirrors, was this great sense of freedom. Like Rachel, I’d just left school, and it was a sense of being in a perfect moment in time; a sense of burgeoning adulthood, even though in reality I was still so naïve.

I’ve also encapsulated so many specific memories: arriving at Santa Maria Novella station expecting the “dolce vita” and instead being met with a MacDonald’s and a homeless man chewing a feather (fact), sunbathing on the buttresses overlooking the Arno, throwing keys to the “lover’s locks” over the Ponte Vecchio… all the joy and freedom Rachel experiences and falls in love with are part of my lived experiences… but my trip didn’t end up going down as dark a path as hers.

Can you comment on the unique experiences of the wealthy and the middle class/lower income?

Much like Ripley, and indeed another famous voyeur—Gatsby—Rachel is a “fish out of water” protagonist, marked by her difference to the heady, frivolous world she’s thrown into. These types of protagonists hold the hand of the reader and give the writer the ability to make a social commentary about the luxurious lifestyles they’re observing and their unsavory reality. Rachel comes from a typical, “humdrum” UK background, whereas Sebastian and Diana are high society, and I wanted to convey the reality of this: that however much she tries to ingratiate herself into this world, she will never be part of it.

Money plays a big part in this realization: A lunch party where the group nonchalantly splits the bill causes Rachel deep anxiety; she finds herself beholden to Diana to pay for drinks and coffees; but it’s also about a sense of self-worth. Diana and Sebastian easily fall into a game of “Who do you know?” They say the right things and feel at ease in social situations, whereas Rachel is always playing catch-up.

Did your job as head of marketing for your brother’s boutique restaurant group inform your writing in any way?

Something that readers and reviewers have picked up on is the degree to which food plays a big part in the narrative. This wasn’t something I did on a conscious level, so I imagine that working in the food industry has somehow wormed its way into my writing brain! My characters are social creatures, so there’s a lot of eating in the book.

Having the cuisine of Italy to work with was no great hardship, but having developed a natural understanding of the language of food over the years I’ve worked in the restaurant business helped me to convey these scenes with authenticity. I like to think the descriptions of food heighten the sensory nature of the book. Perhaps readers will salivate over Ligurian pesto as much as the plot pulls them along?

Visit Florence… but be careful who you make friends with.

How important are writing competitions?

My first novel, A Girl Named Anna, was the winner of The Daily Mail/Penguin Random House First Novel Prize and propelled me into a career as an author. Without that competition, I wouldn’t be talking to you now. So yes, for personal reasons, it’s very important. But to a lesser degree, I would say competitions are invaluable for flexing your writing muscles. They give you practice in getting your work out there, in dealing with rejection, and, even if you don’t win, you may get some valuable feedback to shape or reinterpret your work differently. You never know who may end up reading your work, or where it might lead you.

Can you give us a clue about your next novel, A Girl Like That?

I set it in Cornwall, on the UK coast. It’s about a young girl called Lily who leaves behind a nasty relationship in London to become a nanny for a wealthy couple who has a vast mansion on the Cornish cliffs. Unwittingly, she becomes embroiled in their relationship, but as she falls deeper under their spell, she realizes that the seemingly perfect couple may have a dark secret. It’s out in 2023, and I’m excited to share it with readers. It’s inspired by Daphne du Maurier, with shades of Henry James’s A Turn of the Screw, and although I’ve swapped Tuscany for the Cornish coast, I hope readers will find another beautiful landscape to fall in love with.

My brother has always been my mentor, and the best piece of advice he’s given me is to “take every meeting.” I live by this mantra both in writing and in my everyday life, and it means you should take every opportunity, as you never know what might come out of it.

This is one of my favorite stories: like Rachel in OUT OF HER DEPTH, I studied at Cambridge University. We had to clear out our rooms at the end of every term, but in my third year, I left mine a little messier than was acceptable. I was “Deaned” (sent to the head teacher), and my punishment was that I had to polish doorknobs for a week at seven o’clock in the morning…proper Enid Blyton behavior!