How Well Do You Know Your Neighbors? 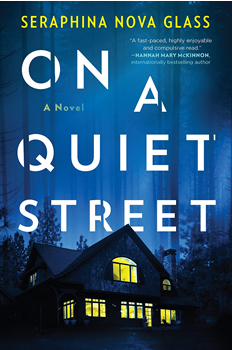 Author, playwright, filmmaker, and professor Seraphina Nova Glass gives readers another eerie story filled with secrets and lies in her newest thriller, ON A QUIET STREET.

The affluent gated community of Brighton Hills on the coast of Oregon should have been a safe place, but it would soon prove otherwise.

“Nothing ever happens in Brighton Hills. Well, nothing you can see, anyway. It all happens in whispers and behind closed doors; it swirls around in rumors and sideways glances, even though the surface is glossy and calm.”

Brighton Hills resident Paige Moretti is still mourning the loss of her son, Caleb. Someone ran over him just down the street. Although labelled a “hit and run” by police, Paige is convinced someone in their neighborhood murdered him, and she’s determined to find out who. Paige now wants to scream at every person she meets, her anger spilling over at everyone and everything, including her husband, Grant. She can’t understand how he can mourn quietly, while she’s like an erupting volcano.

Paige’s best friend, Cora Holman, is the perfect picture of a wealthy Brighton Hills wife and mother. Cora supports Paige in her grief, but she isn’t sure someone in the neighborhood murdered Caleb. She knows Paige is investigating the neighbors, breaking into their garages to look for evidence, and taking pictures. She soon asks Paige to put her detective skills to good use by surveilling Cora’s husband, Finn; Cora suspects Finn is having an affair. One thing is certain—Paige will find out.

Cora is also curious about their elusive neighbor, Georgia Kinney, who never leaves her home. Georgia’s husband, Lucas, has told everyone that Georgia has agoraphobia, but Cora won’t let that stop her from being a good neighbor. Since Georgia and her baby daughter pass the days outside on their deck, Cora plans to visit. But what she discovers will catapult all three neighbors into a dangerous game of hide-and-seek that could prove deadly.

Here, Glass chats with The Big Thrill about her inspiration, how playwriting has informed her novels, and the thrill of domestic suspense.

What was your inspiration for the plot in ON A QUIET STREET?

The characters were my initial inspiration for this one. I fell in love with each of them as they developed and revealed themselves to me—which sounds like a strange way to put it, but that’s how it feels—like they guided me more this time than in previous books. The friendship between women in the story was something I wanted to explore.

I didn’t set out to create a “perfect neighborhood” sort of book, but the more I plotted it out, the more I realized these three stories would best intertwine if they could literally see one another’s lives happening from across the street. I’m generally an outliner and careful plotter—I start with the end and work my way back—but with this one, the multi-character perspective and interweaving stories made it a bit more complex than my previous books, so I let the characters show me the way this time.

How has being a playwright, screenwriter, and professor informed your writing?

A background in playwriting has had the biggest impact on my shift to fiction because, to me, it’s the most difficult of the three. You really learn storytelling structure as a playwright, which is helpful in every other medium. You must hold an audience’s attention, focusing on words rather than action like you might with screenwriting. It’s also very collaborative, so you rely on actors, directors, designers, many people to interpret it, which can be… challenging. Starting as a playwright made all other mediums—I’d never say easy, but more approachable.

Why do you focus on domestic/family issues and suspense in your novels?

I have never started a book thinking it was decidedly a domestic thriller, but the story I have to tell keeps falling into that genre. I read a lot of domestic thrillers, and I guess I write the kinds of stories I love. There is something very relatable in books about an everyday, average person finding themselves in a dangerous situation that the reader can empathize with, so they’re a lot of fun to write. My Google search history is a little frightening, though. I feel like I could get arrested any day considering the things I research for these books.

It’s hard to answer that without giving away spoilers, so I’ll just say that the friendships between the three women and empowerment were things I had in mind when writing it. Especially in the thriller space, which delves into dark themes, it’s important to offer a bit of hope at the end.

My next book, The Vanishing Hour, is a little different from my first three. It’s maybe less domestic thriller and is darker than my previous books. It revolves around a series of murders in rural Maine—in a similar multi-character POV. Two characters are searching for a missing family member, and the third character is the survivor of an abduction years earlier. When the three storylines meet, things take a sharp turn in an unexpected direction, and together, the three discover some shocking truths that take them down a different path to find the killer.

My best advice for aspiring writers is one they’ve probably heard again and again, but I think the most important: read everything you can get your hands on in your genre. Only a few years ago, I started out as a thriller writer, having only read one thriller and deciding I wanted to try it. Since then, I’ve read countless thrillers, and I feel like I’m growing as a writer because of it—knowing my genre, learning my voice and style. Reading books my contemporaries have written is more valuable than any writing course I’ve taken. Read everything.

I’m a homebody. My husband and I travel as a couple with equal amounts of wanderlust and no kids, so on social media, it might look like I’m off jet-setting all the time. But I’m happiest at home and spend most of my time with my dog and my laptop on the front porch—a good cup of coffee or a glass of wine in hand. I’m also obsessed with most things British, including “The Great British Baking Show.”