Your Spouse Only Knows What You Want Him to See 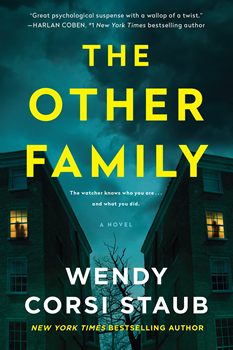 With over 90 books under her belt, if you ask bestselling author Wendy Corsi Staub how she keeps her writing fresh, she’ll tell you that she immerses herself in her characters and story. Using the thriller writers’ famous prompt of “what if?” she’s once again created a twisty-turny family drama filled with secrets.

In THE OTHER FAMILY, 104 Glover Street in Brooklyn is the new address of the Howell family: “a redbrick nineteenth-century row house.”

Nora Howell and her family need a new start. She and her husband, Keith, have had some problems in their marriage, so when a job transfer opportunity came up, they took it. Their 17-year-old, Stacey, isn’t thrilled about the move, but their 14-year-old, Piper, loves the new adventure.

At dinner with their new neighbors, Keith and the girls are surprised to learn that someone had murdered the family who lived there before. But Nora knows the date well—January 17, 1994. The triple homicide was linked to organized crime, but they never found the killer. Now she’s got to be careful about who she trusts.

Nora is used to living with lies.

As the family settles into their new lives, true-crime buff Stacey gets the feeling that someone is watching her and the house. But she has nothing to prove it.

Jacob Grant is used to observing the house at 104 Glover. He strolls by whenever he can—it’s an obsession. After all, he’d intimately known the girl who was murdered there, Anna Toska. He can’t get over her death. Now another family has moved in, and he could swear one of the daughters is Anna—she looks just like her. But how could that be?

As Nora fights to protect her secrets, she must also protect her daughters. Yes, she knows Jacob and what he’s capable of, and she must make sure he will never hurt her family again.

Readers are gobsmacked by the hidden truths in the serpentine conclusion they don’t see coming.

Staub talks with The Big Thrill about what sparked the idea for the story, the secrets family members keep from each other, and her prolific writing career.

What was the inspiration for the story in THE OTHER FAMILY?

The twist ending! It all started there. I won’t reveal what it is, of course, but the novel was a springboard from that initial “What if…?” And I can’t take all the credit. I was writing the proposal last March as the pandemic took hold. I moved our younger son home from his senior year at college when lockdown began and told him about the book in one of my many efforts to distract him from his misery. He was so quiet I wasn’t even sure he was listening, but he was mulling it over. After a few minutes, he said, “I like that, Mom, but what if…?” His input transformed my own twist into an even bigger blindside, and my editor loved it. After that, I had a fleeting (read: delusional) fantasy of keeping the kid home forever as my captive muse, but alas, he’s since embarked on his own life and career, and I’m back to brainstorming plots on my own.

What about your theme of family members keeping secrets from each other?

Again, I was writing this during lockdown, when my household unexpectedly expanded to include our young adult sons, with four people working full-time jobs from home. Yes, we’re a close-knit family, but beyond the fear and uncertainty and surreal aura that permeated those months, we all occasionally felt claustrophobic and got on each other’s nerves. I did many long solo hikes in the woods, pondering family and isolation.

In the book, the Howells move across the country and settle among strangers, so, at least initially, they have no one but each other. That’s no accident, given what I was living through as I was writing it!

There’s nothing more terrifying than danger crossing the threshold so that the familiar seems unfamiliar. It’s about assumption and trust. You can lock your doors, close the blinds, and avoid strangers, but everyone—including spouses and immediate family—has secrets and a private life. You can only ever know someone as well as they allow you to know them.

It’s psychological suspense about a trio of former college roommates who reunite for a girls’ getaway and chip in to buy lottery tickets together. They win the astronomical jackpot, but before they can claim it, the one who’s holding the winning ticket vanishes. The novel’s working title is Windfall, and it’s under contract with William Morrow, due to my editor this spring for publication late 2022 or early 2023.

After writing more than 90 novels, how in the world do you come up with different ideas and keep your writing fresh?

Coming up with ideas is never a problem—they come at me all day, every day, and I will never have enough time to write them all. Every author’s process is unique, but what works for me is total immersion. It means dragging myself out of bed every morning by around 4:30 AM and writing for about 14 to 15 hours, seven days a week, until the book is done. When I’m in the thick of it, there’s very little time in my life for anything else—socializing, hobbies, even sleep. But if I’m all in from beginning to end, I can fully inhabit the world and become the characters, and that’s what keeps it fresh.

If you’re writing as a hobby—because you enjoy it or it’s cathartic—then there are no “rules.” But if you intend to launch a writing career, then you need to invest (time, energy, perhaps money) in educating yourself about the profession, developing your craft, creating your product, and building a business.

Research how the industry works in every aspect, from drafting a manuscript to finding an agent to the editorial process to bookselling to promotion. Join the local chapter of a national writing association, work in a bookstore, volunteer in a library. Learn as much as you can by exposing yourself to writers, readers, and books. Establishing yourself as an author is far more complicated than just sitting down and putting words onto paper or screen.

I may write crime fiction and dwell in a dark creative place, but my friends call me Martha Stewart because I love cooking, baking, gardening, entertaining, and crafting. Anything homey, domestic, and DIY is right up my alley!