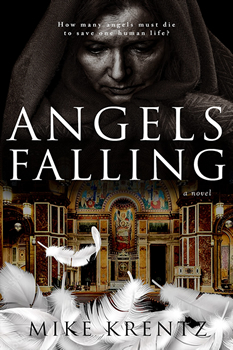 Author Mike Krentz brings us what’s been described as a modern gothic tale at its twisty, character-driven best in his latest work, ANGELS FALLING.

An emotionless villain in a clerical collar murders the Archbishop of Washington, then leaves him in a crucifixion pose before the altar of St. Matthew’s Cathedral. A statuette left at the scene leads criminal profiler Pete Sullivan to suspect a diabolical motive. Enigmatic ex-nun Maria Santos—Pete’s first crush, last seen at their expulsion from a Roman Catholic seminary 20 years ago—joins the investigative task force as a forensic psychologist.

Separate murders of an elderly priest and a five-year-old girl implicate reactionary cult-leader Father Gabriel Valentine, the mutual nemesis who manipulated Pete’s and Maria’s past disgraces. Joining an FBI search of the cult compound after Gabriel disappears, Pete and Maria discover evidence that he was never the man they thought.

The Big Thrill recently connected with author Mike Krentz to discuss his thrilling new release and learn more about the elements that brought it to life.

All three developed in parallel, but plot led the way. I wanted to write about cultism as a spin-off from a traditional religion, in this case Catholicism and the subset of sedevacantism, i.e., the belief that modern Catholicism represents an aberrant schism from the true church and that the current Pope is an imposter. This led to the conception of the three main characters, all of whom have a Catholic background, but the antagonist is a sedevacantist. I imbued the characters with certain psychological disorders that served their roles in the plot. Finally, I settled on settings in Washington, DC, El Paso, and Mexico.

Tell us about your main characters Pete and Maria. What is their relationship as the story unfolds?

Pete and Maria were forced from the Catholic seminary and convent after being caught together in a dormitory. They have different memories of what happened. Pete believes he rescued Maria from assault by another seminarian, whereas Maria only remembers waking up to see Pete standing over her. Forced together in the investigation of the archbishop’s murder, they overcome their initial distrust by sharing those memories and conclude that a third party manipulated their disgrace. They begin a hesitant friendship, but Maria’s inconsistent behavior—cycling between aloof and seductive—confuses Pete. During the climax of the story, they learn the complete, surprising truth that has affected both their lives. They become mutual advocates and friends.

What led you to settle on the settings of Washington, DC, El Paso, and Mexico for your story?

I’ve lived off and on in the Washington DC/Baltimore area, so I chose settings that I know and that serve the story’s themes and actions. (For instance, the pending visit of the Pope to the White House, and the rural region north of Baltimore as a setting for the cult.)

The story required settings on both sides of the US/Mexico border. El Paso seemed the best fit based on geography, size, relative remoteness from larger metropolitan areas, the existence of a large US Army base, and the shared border with the Mexican city of Ciudad Juarez.

As a preschooler, I lived in Mexico with my parents. My dad was an Arizona rancher who had joined a program vaccinating Mexican cattle for hoof and mouth disease. For almost four years, our family immersed ourselves in Mexican culture and way of life. That experience generated a love for the country and its people that lasted the rest of our lives, augmented by knowing so many Latinx people in our home state of Arizona. As a child living in Mexico, my developing mind assimilated the experience in ways I don’t understand, but it’s become integral to my being. I spoke Spanish better than English, but I lost that skill after moving back to the US as a seven-year-old. I am no longer fluent, despite studying Spanish in high school and college too many years ago. I still have an appreciative ear for the rhythm and picturesque verbiage of that engaging romance language. This book contains many passages in Spanish (I hope I got them right) because the English translations cannot do justice to the beautiful words and lilting cadence expressed by native speakers.

Both the challenge and opportunity were my own background in Catholicism and seven-plus years spent in a Catholic seminary in high school and college. I didn’t want the story to seem autobiographical, which it is not—although the settings and some scenes borrow from my experience. Nor did I want the story to appear anti-Catholic. Another challenge, over which I pondered a lot, was the decision to set part of the plot in Mexico with not-so-moral characters. I’m a white male who spent almost four of my formative years living in Mexico, and I still cherish the nation, its culture, its people, and its language. That reality, not cultural appropriation, encouraged me to use that setting.

The core story is characters entangled in and fighting against the consequences of early life trauma, namely internal conflict, dysfunctional personalities, and impaired interpersonal relationships—and winning the battle. In short, self-actualization and redemption.

And yes, same core story in my other books.

I subscribe to the “Three Cs” that I first learned in Dan Brown’s Masterclass; the contract, the clock, and the crucible:

The contract is the author’s promise to the reader to deliver resolutions by the end of the book. In ANGELS FALLING, I promise to solve the mystery of the archbishop’s murder, to resolve the complicated, tense relationship between Pete and Maria, to reveal the true identity of Gabriel Valentine, and to lay bare the underlying psychological dysfunctions and intertwined relationships that drive the entire story.

The clock adds time pressure to the main characters’ struggles to defuse the threats to both themselves and the community, thus driving up the stakes, conflict, and tension. ANGELS FALLING takes place over five tension-filled days, bookended by the archbishop’s murder and the Pope’s visit to DC.

The crucible boxes in the characters and offers no escape while challenges and threats become more daunting and dangerous with each new chapter. In ANGELS FALLING, the pressure on Pete and Maria to assist in solving the murder before the Pope’s visit escalates into dual personal threats and risks to their own lives, as the true antagonist drives the action to the climax.

His medical suspense novel, DEAD ALREADY, transports the reader into the stressful environment of emergency medicine, where life battles death amid terrified screams, plaintive whimpers, and shouted orders; where fallible humans strive to postpone death, restore life, or eliminate misery. These would-be heroes sometimes fail. They suck it up and move on to quiet a frightened child, relieve pain, straighten a broken limb, repair a laceration, or reassure the worried. What evil might lurk amid such chaos?

His psychological thriller ANGELS FALLING launches 1/10/2022 from TouchPoint Press. The ritualistic murder of a Catholic archbishop scrambles the lives of an ex-seminarian criminal profiler, a renegade priest cult leader, and the former nun they both desired. Shakespeare, Poe, and Donne add commentary.

Mike’s Mahoney & Squire series, under contract with TouchPoint Press, portrays the lives of servicemen and women, their challenges and interactions and their wounds—physical and emotional—that evolve into professional and personal conflicts more daunting than combat. Can essential human relationships survive such brutal demands on hearts and souls? The first novel, Show of Force, will launch in 2022.

Born and raised in Arizona, Mike earned a classical degree in English from the University of San Francisco, a Doctor of Medicine degree from the Medical College of Wisconsin, and a Master of Public Health Degree from Johns Hopkins University.

Following a civilian career as an emergency physician, Mike rededicated his professional life to serve America’s Navy and Marine Corps heroes and their families and to honor their sacrifices in defending our freedom and way of life. His last active duty assignment was as 7th Fleet surgeon on board the flagship, USS BLUE RIDGE.

After retiring from the US Navy, Dr. Krentz continued his service as a consultant supporting the Navy and Marine Corps Public Health Center. Upon completion of that mission, he returned to his earliest life passion as a full-time writer.