Countdown to Find a Killer 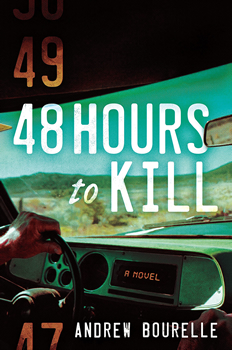 What would you do if your jailers granted you 48 hours of freedom?

Ethan and Abby Lockhart had been the closest of siblings. Their mother worked all the time to pay the bills, so she entrusted Ethan to watch over Abby. She adored her older brother, who always made sure she was taken care of and safe. They were each other’s “number one.”

But that changed when Ethan turned 21 and worked as a bouncer at a local strip club, Dark Secrets. He soon began running errands for the club’s owner, Shark, a local kingpin in organized crime. He was traveling so much, he hardly had time for Abby during her high school years.

When Abby and her best friend, Whitney, see news footage of Ethan’s arrest on TV, their world implodes.

The court sentences Ethan to 10 years in prison for robbing a casino. He doesn’t even consider telling the authorities who else was involved in the heist.

Now the prison is releasing Ethan for exactly 48 hours to attend Abby’s funeral. She’s been missing for three weeks. Although law enforcement never found her body, they’d decided that since she’d left almost two liters of blood—confirmed with DNA to be hers—at the crime scene, there was no way she could still be alive.

Ethan can’t help but try to find her killer. “Thoughts of investigating her murder were just the fantasies of a mourning man who hadn’t come to grips with reality.” The police and FBI hadn’t been able to do it in three weeks, so how could he in only 48 hours? Since she danced at Dark Secrets, along with Whitney, Ethan suspects Shark might be behind her murder.

The hunt for Abby’s killer causes Ethan to resurrect his violent side. “He had spent five years trying not to be the person he saw in the mirror. But there he was: the monster he never wanted to be again.”

Ethan expects to be killed, wrapped in plastic, and either drowned in Lake Tahoe or buried in the desert. Can he solve Abby’s murder before his time is up?

The novel is written in chapters alternating between the various characters in a 48-hour countdown. With the beginning of each chapter giving the hours and minutes left of Ethan’s furlough, Bourelle keeps the tension tight. Readers feel the ominous tick-tock of the clock, and we root for the tough-guy brother who wants to avenge his little sister.

Here, Bourelle chats with The Big Thrill about his inspiration, personal accountability, and redemption.

What inspired the story in 48 HOURS TO KILL?

I wanted to write a race-against-the-clock novel where the tension increases as the clock ticks closer to zero. I’ve always loved stories—whether books or movies—where a countdown provides the structure and pacing. I also wanted to write a book where the main character was a criminal. I love Elmore Leonard’s novels, where the protagonists aren’t cops or detectives, but robbers and thieves and scam artists. Not terrible people—just people whose life choices had led them down that path. Somehow, in merging these two elements—a ticking-clock thriller with a criminal as the protagonist—I came up with the idea of a prison inmate out on furlough.

I used to live in Reno and northern Nevada, where the novel is set. I always thought the area would make a great setting for a noir novel, with gambling and casinos and vast expanses of desert nearby. Lake Tahoe is more than a thousand feet deep, and it’s easy to imagine a group of criminals taking a boat out under the cover of night intending to get rid of a dead body. When I wrote about a criminal on furlough, the obvious setting was Reno and the surrounding areas.

How much research into prison life and procedures did the story require?

I was a newspaper reporter in the early 2000s, fresh out of college and living in Nevada. I visited prisons and jails a few times for articles I was working on and had a thorough private tour of the real Nevada State Prison once, just me and a caseworker walking among the inmates. But that was almost 20 years ago, and mostly what I recall are just moments and images: a guard stationed on a walkway holding a shotgun, inmates freestyle rapping in the yard, fences with razor wire gleaming in the sunlight. I drew from those memories and the impressions I had, but mostly, it was my imagination I used when trying to depict life in prison. I wasn’t so much concerned with the facts of prison life as the feel of it.

The real Nevada State Prison closed down about a decade ago, but when writing the book, I used it as the prison in the story. I created fictional locations for several scenes in the book, like the casino where a high-stakes poker game takes place and a cliff on the bank of Lake Tahoe where the prologue is set. But I kept the prison as the Nevada State Prison. Because the real prison now sits empty, I made it my own fictionalized version rather than capturing the real one accurately.

Tell us more about the themes of accountability, redemption, and responsibility to family that run through the novel.

Ethan is a character who wants to turn his life around. He wants to be a good person. But to find out what happened to his sister, he realizes he can’t play nice and follow the rules. He has to be the person he swore—to himself and to his sister—never to be again. The book grapples with the dilemma of doing what you know is wrong to accomplish what you think is right.

The novel explores the question How far would you go for the person you love the most? How far is Ethan willing to go? Will he break laws? Hurt people? Hurt himself? Will he put other people he cares about in danger? Will he sacrifice his own life? And what might he do if he finds the person responsible? Just how far is he willing to take this?

I’m not sure there’s a message, but the book emphasizes the love of siblings and love of family. Ethan is the big brother, seven years older than his sister, and he’s spent his whole life feeling compelled to watch over her, to protect her. But then he went to prison and couldn’t keep her safe. He carries the guilt of that, which is what fuels his quest to find out what happened to her. I think any parent or older sibling or spouse can relate to the desire to protect their loved ones—and the frustration of knowing that you can’t, not always.

I’m working on another ticking-clock thriller. I don’t want to give too much away, as I’m right in the thick of writing now, but I’m aiming for the same propulsive page-turning feel I was going for in 48 HOURS TO KILL.

What advice do you have for other writers?

Sometimes you have to write when you don’t feel like it. Often, actually—especially if you have a day job that takes priority over your writing. If you wait for inspiration, you might never write. Inspiration comes through the act of writing. You can always revise later, but you can’t revise what’s not there.

I don’t think anyone knows this, except maybe my wife and my brother: A significant secondary character in 48 HOURS TO KILL is Jack, Ethan’s cellmate in prison. Jack previously appeared in my story “Cowboy Justice,” which was published in an anthology called Law and Disorder and reprinted in The Best American Mystery Stories 2015.

48 HOURS TO KILL gives some background about why Jack is in prison, but it’s just a quick summary. The short story, written long before I ever conceived of the novel, shows Jack’s past in all its gritty, violent detail. When it came time for me to give Ethan a cellmate, someone who knows the dangers of taking the law into his own hands, I just thought to myself, “Hey, I’ve already written a character who fits that bill perfectly.”