Between The Lines, Features, Latest Books
2 months ago
by Millie Naylor Hast
0

A Chilling Tale of Human—and Animal—Survival 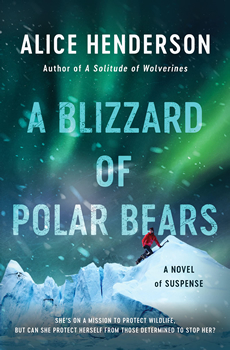 From submarines to courtrooms to the Arctic, thriller authors immerse us in exotic locations and shower us with details only an insider would know. Along with immersive writing, that’s one reason A BLIZZARD OF POLAR BEARS, the second in Alice Henderson’s Alex Carter series, is such a winner.

In pursuit of a nail-biting story, Henderson takes us to the frozen world of Arctic polar bears and the heartbreaking threats to their existence, from a warming climate to humans with murderous intent.

After completing her wolverine study (Henderson’s series debut, A Solitude of Wolverines), wildlife biologist Alex Carter heads off to study polar bears around Hudson Bay. She joins a small team of hardy researchers to track and tranquilize the majestic animals by air over the vast, snowy terrain, examine them up close, and gather important data about their health. Things go wrong, however, when her pilot quits, and her data is stolen. Not one to give up easily, Alex finds another pilot and presses on until her helicopter catches fire above the frozen bay. Having to survive a crash on a vast ice sheet is bad enough, but soon armed assailants on snowmobiles close in, and Alex’s resourcefulness and her survival are on the line.

About Henderson’s writing, Nevada Barr says Henderson’s “depiction of the natural world in all its beauty and terror is spot-on.” James Rollins says she writes “with a naturalist’s eye for detail and an unrelenting pace, where the wilderness itself is as much a character as the feisty wildlife biologist who must solve a crime.” Douglas Preston says, “Vivid characters, a pulse-pounding plot, a fascinating wildlife conservation background, and beautifully realized settings make this an exceptional read.”

With such awesome praise for Henderson, we wanted to find out more, especially about her main character, Alex Carter.

“My favorite kinds of thrillers are ones that incorporate science and history,” Henderson says. “However, I noticed that in many of them, female characters were two-dimensional and existed mainly to have romantic relationships with the male protagonists.

“I’d read these thrillers because I love suspense, and I loved the scientific angle, but the depiction of women started to get me down. So I created a series with a strong female protagonist whose main function wouldn’t be to date someone, but to fulfill her role as a scientist. I also wanted her to be resourceful and know how to fight, how to extricate herself from dangerous situations, and so I created Alex Carter, a resourceful, strong, intelligent, capable hero.”

With Alex, we live through the challenges that face the researchers trying to study and save the polar bears. Henderson believes polar bears are “in many ways the face of climate change.” She spent months in the Canadian Arctic and was “absolutely enchanted by it. I watched the tundra change from the greens of summer to the golds and reds of autumn to the sweeping white of winter. I watched sandhill cranes dancing on riverbanks and snow geese lazing in ponds on the tundra. I spent time at the Arctic Ocean, where freezing winds tore through my hair and made my eyes tear.”

And through Henderson, we experience “how researchers track bears by helicopter, and the amazing number of things they can learn from samples taken from the bears, such as clippings from their fur or swabs from their mouths. This data can then be used to determine the health of bears and hopefully go toward earning them stronger protections.”

Henderson has been a writer as long as she has been interested in helping wildlife. “My days of wildlife advocacy and activism go back just as far as my writing. When I was six, my father gave me his old manual Underwood typewriter, and I got hooked on writing stories then. That was the same year I became passionate about helping wildlife. I mucked out cages at the local wildlife rescue/rehabilitation center and made little crafts to earn money to donate to wildlife non-profits.”

She studied both writing and science in undergraduate and graduate school, learning fiction writing, field zoology, biogeography, screenwriting, climatology, and more. “A few years ago, I was inspired to bring my wildlife research and writing together, because I hoped to not only tell a suspenseful story but shed light on the plight of various imperiled species. Fiction is a great way to entertain a reader while at the same time providing interesting information about wildlife.”

Henderson’s other novels have horror, sci-fi, and dystopian themes, but all to some degree deal with nature and wildlife. “I love reading thrillers, and action and suspense scenes are my favorite things to write. One day while I was setting up bioacoustic recorders in the hopes of recording wolves at a wildlife sanctuary in Montana, it hit me that I should write a thriller series dealing with these themes. The remote, isolated locations would provide excellent settings for suspense, and each book could be about a different species.” An outline soon followed.

The titles are attention-catching. “I wanted the title of each book to be the group name and the animal name. I chose wolverines for the first book because they’re in a dire situation, with less than 300 surviving in the lower 48 after losing much of their historical range due to habitat fragmentation, climate change, and other factors. As I started the book, I set out to find their group name, only to learn that they have no group name, as they are so solitary. So I created one for them, deciding upon A Solitude of Wolverines. Similarly, when I set out to write about polar bears, I quickly realized that there is no established group name for them, either. There are group names for bears in general, but not for specific species. So I created one—A BLIZZARD OF POLAR BEARS.”

The prologue, in which a marine archeologist seeks to establish proof that the Vikings had reached Hudson Bay, is a grabber.

“I have a fascination with shipwrecks,” Henderson says. “I wanted it to serve as a suspenseful glimpse into the plot that would unfold throughout the book.”

As Alex comes on scene and faces increasing obstacles, Henderson weaves “interesting science facts into the story in a way that will not take the reader out of the narrative. I also work to include enough gritty science to satisfy readers like me who want details but not so much that it will turn off readers who are mainly reading for the action and story.”

Next for Henderson is the third book in the Alex Carter trilogy, A Ghost of Caribou. Alex returns to learn if a mountain caribou has wandered down from Canada into Washington State, where the species was driven to extinction in 2019. You can find out more from Henderson’s author newsletter, which contains not only publishing news, but green tips, wildlife news and facts, and volunteer opportunities to help wildlife. To sign up, please visit www.AliceHenderson.com.

On the Cover: Lynne Reeves