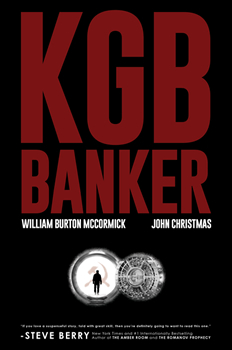 In their new novel KGB BANKER, authors William Burton McCormick and John Christmas bring us a work of suspense fiction that was inspired by real-life corruption.

What if you returned to the land of your ancestors and someone tried to kill you?

When Chicago banker Bob Vanags takes a job at ominous Turaida Bank in Latvia, he hopes to learn of his heritage and to fight economic fraud and corruption. But exposing his company’s secrets comes with being framed for murder—and the threat of never returning home.

The Big Thrill checked in with co-author Burton McCormick to discuss the novel and how it came about.

Well, firstly I want them to be entertained. Suspense, adventure, action, conspiracy, exotic locations, mystery, humor, family drama—my co-author John Christmas and I hope that these aspects are engrossing.

But equally important, John and I hope to inform readers about the countries of Eastern Europe, particularly Latvia, inform about international banking and the mass fraud that exists there, and specifically inform about a certain kind of criminal scheme John exposed in real life. KGB BANKER is a work of fiction, but we hope those who enjoy the fiction will investigate the real crimes that inspired it. John has been talking about those crimes and the millions, perhaps billions, stolen for years from the EU/UK/US, and ideally this novel will help pique interest in the reality behind the fiction.

How did you and John meet?

John and I were introduced by my landlord in Riga, Latvia, a gentleman named Karl Sarkans. Karl was familiar with John’s whistleblowing against a real-life banking scam that affected much of Europe. I read up on the true events and John’s efforts to reveal the wider scandal to the world.  Meanwhile, Karl gave John a copy of my first book, the historical novel of the Baltic Republics, Lenin’s Harem. So thanks to Karl, we both became aware of each other’s work. That led to a conversation and got the ball rolling.

What led you to decide to collaborate on this project?

John wanted to get the word out about the true life scandal. But I’m not a journalist, I’m a fiction writer. I know my strengths and weaknesses. However, as we talked, it became evident we were both very familiar with Latvia (the key country in much of our story), and as we discussed things, it seemed more and more we could collaborate on some type of book. So we decided to use our mutual experiences and talents to write a fictional thriller inspired by real events. John knows banking and has experiences similar to our protagonist. He also is a novelist in his own right (or maybe I should say “own write”!).  I’m experienced at suspense, mystery, action scenes, and writing thrillers for major crime magazines. So we complemented each other well.

For me, I think it was getting up to speed on all the financial aspects as well as finding a way to merge our writing styles. John’s previous novel was dystopian science fiction, while I worked in historical thrillers. We had to find an authorial voice that worked for both of us. That, and we were often on different continents with different time zones, which meant at least one of us was reading the other’s work at awful hours.

I can’t speak for John, but I’d imagine he’d say his co-author was cranky, pushy, and sent incomprehensible emails at 3 a.m. And he’d be right!

John wanted me to add my series character, Latvian investigative reporter Santa Ezeria, to the manuscript. Finding her role in the story in a way that would please Santa fans without the character stealing too much of the spotlight from our main protagonist, banker Bob Vanags, was a challenge. But I think we hit on the perfect balance for both characters, and the final product is far greater than the sum of the parts.

The biggest opportunity without a doubt is to alert readers to a massive financial fraud that is still going on worldwide.

The key to suspense (as opposed to surprise) is for the reader to have knowledge of dangers of which the hero is unaware. The reader must feel tension, even dread, if the main character is unwittingly walking into a trap or being fooled by someone the audience already knows is an enemy. In KGB BANKER, we do this very early. The reader becomes aware in the prologue that the bank will kill to protect its secrets. That sets up the central tension as our hero begins working at the corrupt bank, unaware that every discovery he makes puts him and his family in greater danger. We have plenty of surprises too, but I think we establish the novel’s suspenseful nature from page one.

I think there is an assumption that many financial thrillers are somewhat dry. All about numbers, loans, assets, bonds, etc. But I can tell you our book is full of action, dark humor, and a foundational father-son relationship between two of our three main characters. You don’t have to know the first thing about banks, finance, or even Eastern Europe to enjoy this. The story and characters trump everything.

William Burton McCormick is a Shamus, Derringer, and Claymore awards finalist whose fiction regularly appears in Ellery Queen’s Mystery Magazine, Alfred Hitchcock’s Mystery Magazine, The Saturday Evening Post, and elsewhere. He is a graduate of Brown University, earned an MA in Novel Writing from the University of Manchester, and was elected a Hawthornden Writing Fellow in Scotland. His historical novel of the Baltic Republics, Lenin’s Harem, was the first work of fiction added to the permanent library at the Latvian War Museum in Riga. A native of Nevada, William lived more than a decade in Latvia, Estonia and Ukraine, the key settings of KGB BANKER.

John Christmas is a former banker whose banking career ended when his whistleblowing against his employer was covered up by the European Bank for Reconstruction and Development. He earned a BA at Dartmouth College and an MBA at Cornell University. He has lived in the United States, Latvia, Spain, United Kingdom, and Malta. He wrote the dystopian novel Democracy Society, which was released in 2011. Now he enjoys time reading, writing, and boating in Europe. His experiences as a whistleblower inspired KGB BANKER.