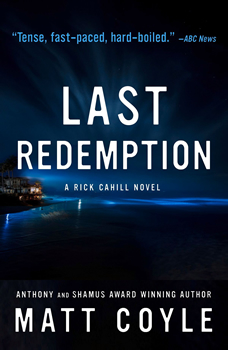 The last time we met Rick Cahill in Blind Vigil, he was fighting crime without any eyesight because of a gunshot wound. Now, award-winning author Matt Coyle has upped the stakes even more for his iconic Southern California PI in his latest thriller, LAST REDEMPTION.

Cahill—his eyesight back (albeit with special glasses), planning to get married, and with a baby on the way—suffers another devastating medical setback when he is diagnosed with CTE, a traumatic brain disease from his life of physical violence that most often leads to dementia and early death.

At the same time, a seemingly simple surveillance job involving his best friend’s son quickly plunges him into a treacherous world of high finance and murder as he battles sadistic killers and his own disease to save his friend’s son and live long enough to see the birth of his child.

“One of the rules I had when I first started writing the series many years ago was that everything mattered,” Coyle says, when asked about how he came up with the idea for Cahill to suffer from CTE—and face progressive senility and early death just as he was about to finally have a chance for happiness as a husband and a father.

“Every bad decision and violent encounter had to have consequences and repercussions. So unfortunately, it seemed like the logical progression from the physical life of violence Rick’s led. He boxed as a kid, played football from the ages of about 13 to 20, and suffered multiple concussions as a cop and private investigator.”

For those who are just being introduced to the Rick Cahill character, Coyle describes him this way: “He’s an ex-cop turned private investigator who for many years was the main suspect in his wife’s murder. He has an almost manic need to find truth, no matter the consequences, on every case he takes.”

Cahill also lives by a code he learned from his father. That code is: “Sometimes you have to do what’s right even when the law says it’s wrong.” Cahill repeats that trademark phrase in books throughout the series.

So where did it come from?

“I wish I had a great answer for this or could even remember the exact moment I came up with it,” Coyle says. “It came from my subconscious, like a lot of the important parts of Rick’s story have. However, it came to have great meaning for his journey and gave some substance to the dangerous decisions he makes.

“He’s not just some reckless guy who does whatever he wants. He’s following a code, a credo, a structure to his life. Of course, it often gets him into trouble, and he begins to question his own sense of right and wrong.”

LAST REDEMPTION is the eighth book in the series. What was Coyle’s inspiration for creating the Rick Cahill character in the beginning?

“I don’t know that I had a specific inspiration,” he says. “I wanted to write about a flawed private detective with a somewhat dark past, but I didn’t really have a great sense for him until I came up with what would become the first sentence of the first book, Yesterday’s Echo: ‘The first time I saw her, she made me remember and she made me forget.’ That sentence opened up Rick’s backstory to me and made me realize that his past was much darker than I anticipated and that he’d suffered emotionally.”

Coyle says all of the Rick Cahill books are written the same way—he’s never sure exactly what Rick is going to wind up doing until he’s finished.

“I don’t outline. My process gets messier and messier with each book. However, when you call the process organic, people tend to think you know what you’re doing. That’s not to say that there isn’t some structure to my process.

“When I begin to write a book, I start with the major subplot. What is going on in Rick’s life that has emotional consequences that can be exacerbated if he takes a difficult case? Then I come up with an inciting incident for the major plot, something that draws Rick into an investigation.

“I usually know who the bad guys are and a general idea of the ending. However, the plot really evolves around the actions Rick takes.”

His Rick Cahill books have been nominated for numerous honors—winning the Anthony and, most recently, a second Shamus Award for best mystery of the year with Blind Vigil.

What was Coyle’s most satisfying moment as a crime fiction author?

“Maybe winning the Anthony Award for my first book, Yesterday’s Echo. Of course, opinions are subjective and so are award nominations and votes for the winners, but the Anthony gave me a sense that I belonged in the wonderful world of mystery writing and mystery writers. Writing can be a lonely endeavor without a lot of feedback, so getting nominated for a few awards for the first book and then winning the Anthony made me realize that there were at least a few people out there who read me and thought I was doing a good job.

“The Shamus was pretty special, and to be fortunate enough to win two is very rewarding. I’ve wanted to be a PI writer ever since I was a kid, and it took me a long time to figure out how to do it. So to have my name etched alongside great writers who have inspired me my whole life is almost impossible to describe. Let’s just say it’s a good feeling.”

Coyle also does an online blog show called Crime Corner. “Crime Corner is a less than semi-regular podcast I do where I get the chance to talk to mystery writers, true crime writers, agents, booksellers and fans,” he says. “My goal for 2022 is to make it more regular.”

So where will Coyle’s Rick Cahill character go next? Wife, baby, dealing with the CTE and all the rest?

“Yes. I just turned in book #9, entitled Doomed Legacy, which will come out next October,” he says. “In it, Rick deals with all the things you mentioned, oh, yeah, and a murder and conspiracy.”

Between the Lines: Alice Henderson